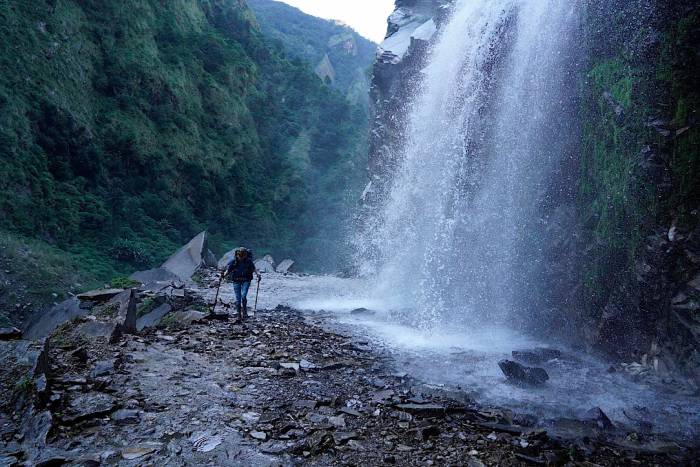 A hapless guide, poison tea, and fatal flooding — these are the hard lessons we learned about the avoidable dangers of trekking in Nepal.

After getting a glorious 105 miles through the Upper Mustang region of Nepal under our belts, the sky seemed the limit to our Himalayan hiking endeavors. In the market for more mountain fantasia, we signed up for a fortnight’s trek in the Manaslu Conservation Area, part of the Mansiri Himal range near Tibet.

What we didn’t appreciate was that the best-laid plans could go royally wrong. Unbeknown to us, we set off with a less-than-capable guide during peak festival season, there were dangerous landslides and a fatal avalanche ahead, and we were primed to be poisoned at a teahouse.

Here’s a brutal account of how we almost snuffed it trekking in Nepal. And foremost, the lessons learned from one helluva trip!

Having recently left an Indian ashram on an intense volunteering program, my partner, Jason, and I deemed hiking the Himalayas a harmonious endeavor after such a spiritually awakening window.

Our bodies were in balance, yoga-fit, and as strong and healthy as they’d likely ever be. Moreover, Nepal was only a 48-hour sleeper train and a day’s taxi ride away, giving us the time to digest what we’d just done — India was a lot to drink in.

Divinely, our window to trek Manaslu in October 2022 dovetailed with our friend’s timeline, flying into Pokhara later that month. Alas, our tight trekking window conflicted with a huge Hindu festival, Dashain. No matter, there would likely be less congestion on the trails.

Because the Manaslu region is restricted, hiring a certified guide is compulsory, a commodity that’s few and far between during Dashain. Understandably, celebrating with loved ones took precedence.

Slim pickings meant days of traipsing to practically every trekking agency in Pokhara, eventually producing the only guide in central Nepal willing to work.

With only 3 hours to secure our permits before the Nepal Immigration office closed for the holiday, we sat down to meet him. Grateful for the wages, he emitted all the right noises to satisfy our antenna of curiosity for striking a compatible relationship over the 14-day, strenuous undertaking.

Assembling at the bus station, my eyebrows furrowed at our guide’s small daypack. Was this “Dora the Explorer’s” gear?

During our earlier meeting, he’d agreed to carry a few kilograms of weight for me — rookie mistake number one.

After reaching Gorkha, we cut short the next bus ride en route to the trailhead at Soti Khola. It was rammed with bodies, packed in cheek-to-jowl like sardines — the norm for a Nepalese holiday.

Overloaded, the bus lurched along the muddy tracks next to vertiginous drop-offs. This set our noses out of joint as we paid through the nose for a private Jeep to get us there.

Less than a half-hour into the hike, our guide plopped himself down for a smoke and proceeded to take breaks whenever the nicotine urge took him.

Our guide soon revealed an urgent need to source altitude sickness tablets. With each step, he trudged on against his will. We asked him to align with our pace, so he took to walking on so far ahead we were left negotiating a raging river crossing by ourselves, without a trace of him in sight.

After increasingly sulky, rude responses from him, it was time for a pep talk. It became glaringly obvious he wasn’t qualified for the task at hand.

Later, his certification card fell on the floor. It had long expired.

The next morning, Jason remarked that our guide reeked of alcohol, to which he wafted his hand like ridding a nuisance fly. On our journey, he maintained a hangover you could sell to science.

In all, this person didn’t have our backs; he didn’t even have his own. He carried no waterproofs, water bottles, or first aid. Adding insult to injury, he lost a sock after drenching his boots, so he switched to flip-flops.

All this occurred by day two of the trek.

After some initial frustration, my anger fizzled out, and sympathy arose so acutely that we refrained from telling him how to do a job for which he was not prepared.

Perhaps insensitively, I drew the line at having to listen to him bang on about big tips.

A Cup of Poison

The end of the second day saw us reach a remote place called Jagat. The Manaslu Shanti Hotel and Lodge was inexpensive, and the rooms were basic but comfortable. There was even a paid warm shower.

After a long day in the blistering heat, I plunged into the refreshingly cold option. We were clean, ravenous, and could’ve murdered a cuppa.

With the first swallow of ginger tea, I started coughing profusely. I attributed the hacking cough to a substantial chunk of ginger infusing the drink. Barking persistently after the second sip, I pushed it to one side. At that point, Jason had consumed an entire mug teeming with mycotoxins.

Within 10 minutes, Jason mentioned he felt funny. Less than 60 seconds later, he was hunched over on all fours, violently retching in the courtyard’s drain.

I listened to the sound grating in the air. White as a sheet, he abruptly lost consciousness, his body dropping like a slammed door as his chin smacked the concrete.

Paralysis took hold of him. The fear sloshed over me, each wave colder than the last. I later learned this state was called “locked-in,” as he repeatedly went stiff as a board before collapsing in a rigid heap.

As the light from his eyes extinguished, I thought Jason was having a stroke or a heart attack. I heard myself bellowing, “What’s happening? Why … how?”

I started again in a welter of disconnected thoughts and stared at Jason, my brain stupid with disbelief. He lay lifeless in my arms for what felt like a lifetime.

About 30 seconds lapsed. I thought this is what it’d be like without him. A wide-eyed tightness took hold of my chest, like a scream. I remember clutching him tightly as if to soak the man into my skin.

A Ginger Shouldn’t Be Gnawing on Ginger!

Agonizing moments later, I began exhibiting identical symptoms. I recall losing my vision as my blood surged up and down my body in unfamiliar fury.

My head buckled, and I tried to haul it up again. But it only sank further, as if it were weighted with stones.

Parts of me were on fire, others stone cold as my central nervous system shut down. When I ceased fainting and finally stopped vomiting, I felt hollowed, gouged out like a beach beneath a keel.

While waiting for the said cups of tea, we met Renee and Pierre, an unreserved Australian couple traveling the world. Forgoing a game of UNO planned with us, they launched into being our caregivers.

The second our situation went awry, Pierre jumped on a call with Dr. Joshi to keep us alive while Renee implemented the advice, nursed us back to health, and kept my panicked state to a fragile calm.

They mobilized a helicopter on standby and even carried us to the toilet, where maintaining any scrap of dignity had long left the scene. I would dread the alternative if it wasn’t for their selfless, 24-hour intervention during the traumatic ordeal.

As the milk of human kindness during our darkest hour of need, we can’t thank them enough.

Sadly, many Nepalese locals and an undercover journalist (assigned to exposing trekking misadventures in Nepal) relayed compelling opinions that what happened to us was malicious.

While Renee saw the moldy blackened ginger from the hotel’s kitchen used in our drinks firsthand, I don’t dwell on any intentions, benign or bad. For their part, the owners blamed our sickness on us taking a cold shower after hiking in hot weather, followed by the ginger and honey in our tea, all of which naturally elevate the body’s temperature.

It’s distinctly possible that some hoteliers are in organized cahoots with those running the rescue helicopters and hospitals concerning tourists. As a result of deliberately making trekkers sick in remote areas of this developing country, palms are crossed with silver from the travel insurance claims paid out — allegedly.

Don’t let these evacuation rackets put you off; it’s simply worth your awareness. Since our ordeal, the Trekking Agencies’ Association of Nepal (TAAN) has shown a duty of care in investigating any malign intent. Should the verdict be an unsavory one, they have the authority to shut down those involved. It’s a relief knowing this for any future trekkers.

I wake sometimes at night poked by life’s precarious nudges. Alongside me, Jason’s pulse beats at his throat. I listen to his breath, warm and thready on the nighttime air, and I’m calmed.

Safety in Nepal: What We Learned

The hiking industry in Nepal is extensive. There’s no shortage of registered agencies and guides (not all accredited) touting for business.

Shop around, as there’s no substitute for meeting your guide in person. Refer to TAAN for peace of mind. 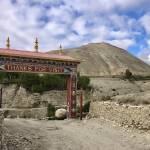 In a rain-shadow region of the Annapurna and Dhaulagiri mountain ranges lies one of the last Tibetan utopias, unknown by the masses as Upper Mustang, Nepal. Read more… 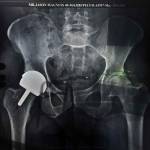 My Trip to India for a 'Budget' Hip

When a 40-year-old outdoors athlete requires a hip replacement, he travels from Oregon to India. This is his first-hand experience with the burgeoning world of medical tourism. Read more…