Most skiers reach a peak at some point in their lives, when they’re shredding their hardest, and sending it bigger than they’ll ever send again. But not Hoji. Decades into his career, the pro freeskier is still charging harder than anyone, as evidenced in ‘Anywhere From Here.’

Over his long professional ski career, Eric Hjorleifson has been called many things. He’s been called a legend, a pioneering freeskier, Tinkerbell, and Hoj. Though, most know him simply as “Hoji.”

He has been shredding since he was a tiny 2-year-old Canadian kiddo. And since then, his love for the sport has never wavered. It’s still growing to this day. And it’s taking him to some incredible parts of the planet.

Check out this clip from “Anywhere From Here” by Matchstick Productions, and it’s clear within the first 20 seconds why Hoji is so revered. He goes the distance, climbing up mountain ridges in the dead of winter, skis strapped to his back, thousand-foot falls on all sides of him.

And when he starts coming down, he absolutely rips. Hoji has been at it for decades. And at the ripe age of 38, he’s still skiing harder than you — or me — or anyone else for that matter.

That’s all showcased in the aptly named clip “HOJI — Freeskiing Legend Still Skiing Better Than You” from the full-length movie “Anywhere From Here.” The full film can be seen here. 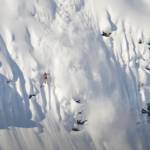 Fast and Steep: 'Hoji' Goes for Broke in the Esplanade Mountains