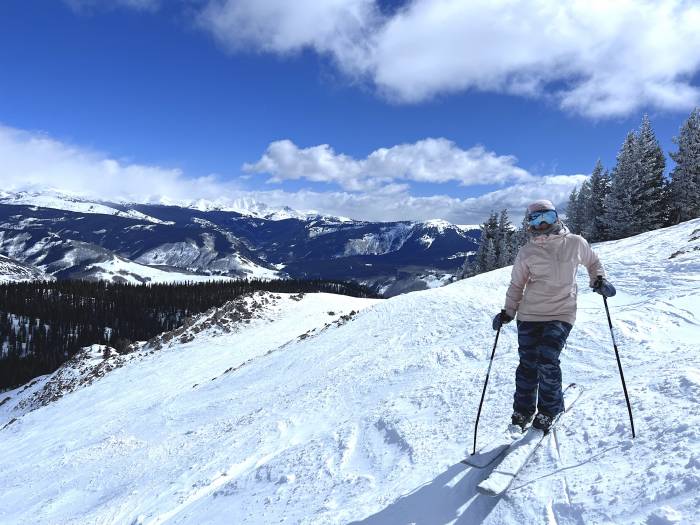 Olympian Wendy Fisher is an expert on the extremes at Crested Butte Mountain Resort; (photo/Morgan Tilton.)

Now in her 50s, Olympic ski-racer Wendy Fisher made a huge pivot to big mountain skiing when she first visited Crested Butte Mountain Resort 26 years ago — and she never left.

Wendy Fisher, 51, still fiercely charges perpendicular faces and moguls at her home ski area, which helped shape the sport of extreme skiing and Fisher’s lifelong career as a competitor and coach.

Nearly 3 decades of experience in the extreme terrain at Crested Butte Mountain Resort (CBMR as the mountain is also known) makes Fisher a lead expert on this challenging terrain. Par for the course, she’s an official ambassador for CBMR, where she teaches and guides people all over the mountain.

To learn more, I linked up with Fisher for a half-day of skiing to check out a handful of her favorite daily steep runs.

If exploring difficult turf is your top priority — and you have the skills and experience to safely do so — here’s our highlight reel, so you can go, too.

Wendy Fisher Is Among the World’s Best Big Mountain Skiers

When she retired from ski racing, Fisher was completely burnt out. She took a last-ever ski road trip to say goodbye to the sport and hang up her gear in 1996. Swinging through Crested Butte, she stayed on the couch of two-time World Extreme Skiing champion Kim Reichhelm.

By 1998, she won the overall International Extreme Freeskiing World Cup title and continues to win comps and premiere in films today.

And either due to herculean genetics or magic, she has never been injured.

So, after I met Fisher at the Blister Summit ski demo, where she co-led pods of registrants around CBMR, I was really excited to explore the mountain more with her one-on-one.

Learning How to Ski Like Wendy Fisher in Crested Butte

We started the morning with a lap on Headwall, where Fisher had made that legendary air, which set her lead during her inaugural U.S. Extreme Skiing Championships competition in 1996 (she ultimately secured third place).

Headwall is known for gullies, chutes, a technical character, and a sweeping bowl filled with powder and moguls. The area is also the quickest and easiest to access among the extreme terrain.

“I like to hit the Headwall straight off, because then you can get stuck in the North Face zone for a handful of laps. I love how steep it is up here, the big rollover — where you can’t see the run below you — and the consistent pitch. Whether it’s a powder day or windblown, it’ll either be super soft or buffed. It’s never in bad shape,” said Fisher.

To reach Headwall, we took the Silver Queen Express Lift at the base, skied down North Star, and snagged the High Lift T-bar.

On a powder day, Fisher gets off the T-bar halfway to enjoy a lap on Big Chute first.

From the top, we dropped into the Headwall Upper Triangle. Fisher pointed out Rabbit Ears, Box Rock, and Ear Canal: a few of the unique colloquially named features in the upper half of the bowl.

We veered skiers right above the Nose, a pronounced prow that is noticeably more vertical than the surrounding face and one of Fisher’s favorite spots. “The Nose is only skiable when there’s enough snow, because it’s so rocky. I love skiing right down the center when it’s in,” she said.

That day, the Nose was too sharky, so we descended the channel between the arch and Angle Gully, a steep rocky zone in the upper-middle section of the Headwall face.

Below the rock field, Headwall becomes a wide-open basin that usually holds snow.

We looked back up at Fisher’s historic line she took during the 1996 extremes. On her first lap, she had followed suit with the female competitors, who veered around Angle Gully. Then at the bottom, she stood next to Shane McConkey, who she’d grown up with, and watched the male skiers punch lines through the center and rocks.

“They were doing crazy things, and their technique was horrible,” Fisher had shared a few days earlier during the Blister Summit panel. She said, “I kept looking at Shane, saying, ‘I’m better than that guy, right?’ He said, ‘yes.’ We did that for five skiers. He helped me pick out a line, and I went back up for a second run. I got to this air [in Angle Gully] and the crowd was roaring … everyone was like, ‘we’ve never seen a girl do that.’”

That thrilling moment catalyzed the next chapter of her ski career.

After a kickoff lap in Headwall, we dropped down to the North Face Lift, another T-bar.

We swapped embarrassing, hilarious stories about how we’d fallen several times on ski lifts and T-bars — yes, even chair snafus happen to Wendy-freaking-Fisher. Don’t forget to laugh and not take yourself too seriously.

At the top, Fisher said, “It’s hard to choose a favorite run on North Face Lift. If it’s a powder day, they do a staggered opening, which I like, because you have another powder [stash] to look forward to.”

The North Face is known for some of the most consequential and aggressive terrains in the extremes. Even the most experienced athletes are very selective with their lines and avoid certain runs altogether.

As Fisher explained, the runs are separated into four general areas from west to east: the North Face, Staircase, Spellbound/Phoenix, and Third Bowl.

For our first lap, we dropped through the High Notch entrance into Hawk’s Nest, a big open bowl, and descended to Sock It to Me Ridge.

If the conditions had been more filled in, we would have continued down into “Cesspool, a big open chute that I love — it’s ratty terrain that you have to think about, which I like,” said Fisher.

Instead, we zigzagged back west to the Last Steep, a wide and open area flanked by trees. Halfway down, we took Buck’s Traverse (skier’s left), a ski cut in the trees that provides an easier exit to Paradise lift. If you miss the midway exit, you can also hike out at the bottom.

On our second lap, we entered Hawk’s Nest and took the high traverse — called Million Dollar Highway, which is marked — eastbound beneath Spellbound Glades to Spellbound Bowl.

Fisher pointed out a rocky cliff band called Moosehead, which was visible below us and to the east. We skied beneath Moosehead to the entrance of Phoenix Bowl, another favorite of Fisher’s.

I watched her fly down, making huge S-turns across the hardpack moguls like it was a soft bowl of mashed potatoes. She stopped at the bottom to wait. I love finding a groove on moguls, but as I dropped in, I felt like a jack-in-the-box clown clambering between chunder and bulletproof mounds.

“How did Wendy make this look easy?!” I thought. I get to the bottom, and she said, “That must’ve been the worst conditions I’ve ever skied that run!” Point being, she’s an unbelievably impressive skier. Otherwise, Phoenix Bowl is a must-go on a powder day.

We took the run to the bottom, and then took a moment to look back up at the gnarly cliffs Fisher has dropped over the years.

“There’s Dead End Chutes, Body Bag Glades, and Dead Bob’s Chute. Airing a cliff in Body Bag, I won the U.S. Extreme Freeskiing Championships in 2005, before I knew I was a few months pregnant with my son Axel before,” she said. Fisher also took second place in the competition the following season, after she’d had her son.

How to Learn More

Study and grab a ski area map, and read our article “How to Ski the Extremes of Crested Butte Mountain Resort.”

The most well-trafficked black diamond runs feature posted signs, though some sections in the extremes do not have explicit signage, similar to Kicking Horse Mountain Resort in British Columbia. You need spacial awareness, navigation skills, and a mental roadmap planned out in advance.

For a comprehensive book of all of CBMR’s runs, pick up a copy of the Extreme Limits Ski Guide, by Greg Payne and Sandra Cortner.

There are many challenging, enjoyable black runs from the main ski lifts that are easier to explore, but if you really want to learn the extremes, it’s worthwhile to meet up with a guide for a half or full day.

“It’s [mental] training to ski Crested Butte — figuring out your entrances, exits, and how to not go into big rock fields, especially on low tide seasons. There’s a lot to know here, and it’s not very easy to see what’s ahead of you and around the corner,” said Fisher, who loves showing people the mountain, giving them lessons on technique, and demonstrating how to use the complete “real estate” of skis.

She said, “If you really want to enjoy this resort, it’s worth getting someone to show you the nooks and crannies one time, then you can take advantage of that knowledge the rest of your stay.”

I’ve had a season pass at CBMR for two seasons and I agree: My day out with Fisher was among the most educational I’ve had yet. We safely explored dicey terrain I hadn’t yet entered or known how to venture into, and I can’t wait to go back.