You need a wear-anyplace jacket this winter. In this review, we pit the popular Mountain Hardwear Ghost Whisperer against a cousin “light puffy” coat, the LL Bean Ultralight 850 Down Jacket. 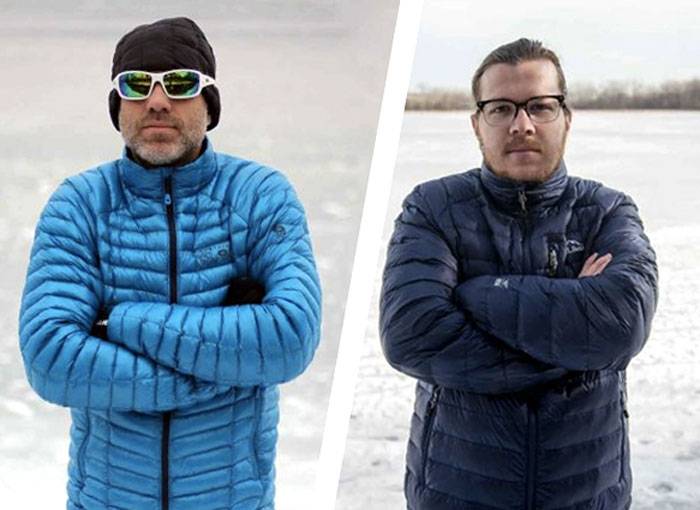 The two jackets look alike and both have a wispy feel. They are uber-warm for their weight, and each is wearable across multiple activities and through a big range of winter temps.

For the extra dollars, you get a few tangible advantages with the Ghost. But we can recommend both coats here, as they performed while hiking, biking, skiing, and for day to day wear this season when the temps dropped.

Here’s our breakdown, LL Bean versus Mountain Hardwear, head to head outside and in the cold.

It won a spot on our “gear of the year” list back in 2013. But the Ghost Whisperer remains relevant (and much loved) by multiple editors at GearJunkie.

Its extra thin, extra smooth fabric, a 7D x 10D nylon, is an industry standout and unique to Mountain Hardwear. The 800-fill down in its baffles keeps you toasty and is treated to resist moisture, called Q.Shield down, when the weather is wet. 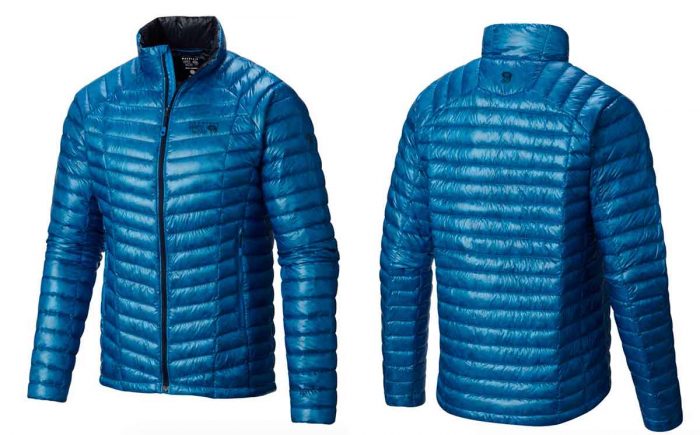 It’s touted to be wearable across a massive, 50-degree temperature range, from 25 degrees down to minus-25 F. The Ultralight 850 Down Jacket obtains this warmth and versatility via its namesake baffles of airy, 850-fill down.

A fabric shell made of Pertex offers moderate wind- and weather-protection. The insulation (DownTek down) is water resistant to keep the feathers from clumping if wet. LL Bean commissioned a solid contender at a fair price with this ultralight puffy piece.

The feathers from geese (down) are susceptible to clumping when wet. This zaps the ability to trap air and insulate. To combat the effect both these jackets (and many like them) use water-resistant down. Mountain Hardwear has its proprietary Q.Shield down, and LL Bean uses a more widely available option from DownTek. 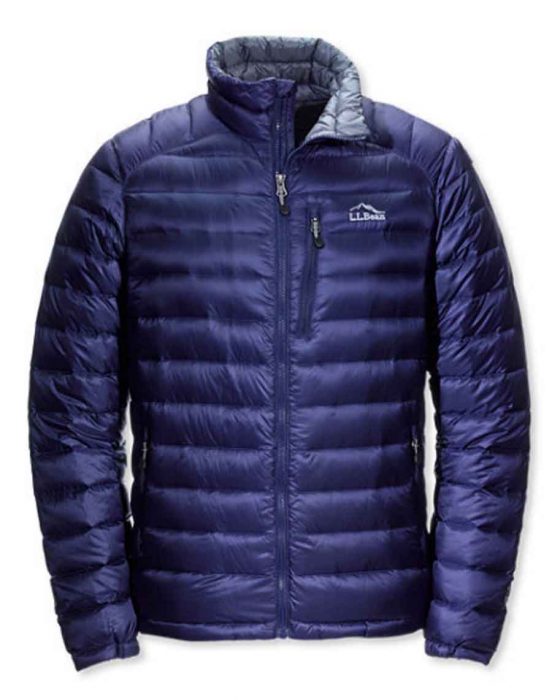 Both types add treatment to the down to make it repel water, and in our tests, they both work. The difference is subtle if any, though under lab conditions there’d likely emerge a better solution.

In the field, when the insulation did get wet, both jackets maintained most of their loft. Granted, step No. 1 should be to attempt to stay dry (by pulling on a shell jacket) but if you do soak through, the fortified down is a solid backup.

A new jacket from The North Face claims to provide unprecedented performance in cold, wet situations. Time for the ThermoBall to go swimming. Read more…

For loft, Mountain Hardwear uses an 800-fill down, while LL Bean goes with an 850-fill. The higher the number, the more light and airy. However, in use they feel the same. Because of Mountain Hardwear’s lighter, more supple fabric its insulation, though rated lower, actually feels airier.

The buttery nylon used on the Mountain Hardwear Ghost Whisperer is known around the industry. Its construction — a 7D x 10D rip-stop — is so light, yet strong and water-resistant, that it’s the envy of many a jacket junkie out there. (No joke: We once had an impassioned reader write an elaborate poem about the Ghost Whisperer and its “silky face.”)

Though not as emblematic, LL Bean made a good choice with its outer fabric. The tight-weave Pertex fabric shell is wind- and water-resistant and tough. We’ve long been fans of Pertex nylon for its performance, strength, and relatively light weight.

LL Bean touts a “slightly fitted” design, which sounds a bit down-beat but is just noting it’s not an articulated piece. Neither is the Hardwear puffy. But both fit close and almost tight, which is how you want an insulated piece, no big gaps between layers.

But overall the Ghost Whisperer fits better. It’s a subtle win, though while XC skiing or moving fast in these jackets the LL Bean took second place to the swishing feeling and closer cut of the Ghost.

Each one stuffs into itself, folding and packing into a pocket then zipping tight. the result is a small pod you can clip to a carabiner or throw into a pack. But LL Bean, with its thicker fabric and extra pockets, did not pack up as small as the mango-size stowed Mountain Hardwear.

On the scale, in size large, the Ghost Whisperer hit 7.5 ounces, and the Ultralight 850 Down Jacket ticked to 13.1 ounces. These are both respectably light. That said, the Ghost is, well, ghostly light on the body, while the Bean feels like a “normal” minimal coat.

As noted above, the LL Bean jacket is touted to be wearable across a massive temp range (from 25 degrees down to minus-25 F). That is, if you’re standing still with just minimal clothing underneath, the jacket should be fine for near-freezing temps. Whereas, if you’re skiing or running, breaking a sweat, the jacket and a layer or two underneath can be wearable to way below zero.

Mountain Hardwear doesn’t give a temp spectrum, though we’d offer around the same usability range. It was wearable on warmer (near freezing) days and then down to zero degrees and below in our test.

The Kusa jacket line from Cotopaxi is stuffed with an insulation made by combining polyester with wool trimmed from the long-neck domestic beasts. Read more…

Overall, neither jacket was significantly warmer. But both were exceptional compared to much of the competition. Indeed, warmth combined with light weight is the magic combination with the Ghost and the Bean (and some similar jackets), and it’s among to top reasons you should look to buy.

Sleet, rain, and snow were present during our review at various points. In general, the jackets here deflected the frozen stuff with no issue. Once above freezing, rain and sleet can soak in; you should have a shell jacket available especially in the backcountry as the top line of defense.

However, even when the outer fabric felt wet it took a long time for moisture to seep through. We biked in the worst kind of weather — a freak Christmastime rainstorm at 35 degrees — and subjected the jackets to 30 minutes of deluge. Once done, the outer fabric and some of the down was soaked through, but our base layer tops underneath remained relatively dry.

These jackets have no hoods, which we prefer in most scenarios (but chose to review these hood-less). In fact, there are few features on either of these models. The Ghost has simply two hand pockets and a main zip-up. The cuffs stretch to comfortably fit your wrists, and that’s about it.

LL Bean adds a headphone port and an inside pocket as well as one on the chest. The extra zippers and pockets add some weight but also add convenience to stash items while on the go. Finally, both include a bungee hem, letting you cinch the bottom of the jacket tight around the hips to lock in warmth.

Ultimately, these are two very good jackets. Buy the Mountain Hardwear if you put a premium on light weight. For most others, the LL Bean makes a great choice that leaves money in the bank.

A handful of competing products exist that occupy the “light but warm” puffy niche. Beyond down, there are synthetic options and also jackets insulated with llama fur, wool, and more. It’s a growing category, and no wonder — these kind of jackets simply work.

Look at Patagonia, Marmot, Outdoor Research, Arc’teryx, Columbia, The North Face, and many more for your puffy fix.

–See full info on the Mountain Hardwear Ghost Whisperer and the LL Bean Ultralight 850 Down Jacket.