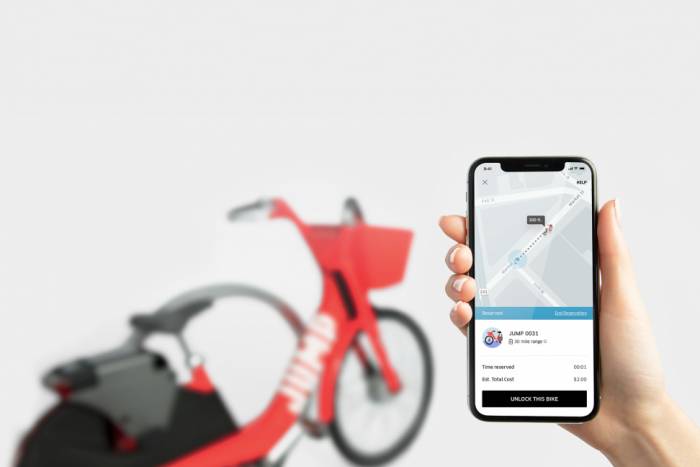 Fans of the San Francisco-based ride share may soon have another option in their area. That’s because Uber today announced an agreement to buy New York-based JUMP Bikes, an ebike-sharing startup.

The two companies previously teamed up to allow Uber users to reserve JUMP bikes around San Francisco. But Monday’s announcement paves the way for expansion of the Uber Bike program into other markets.

“Our hometown pilot is off to a very strong start, with riders enjoying a convenient and environmentally friendly way to cruise up and down our trademark hills,” Uber CEO Dara Khosrowshahi wrote in a news release.

“But our ultimate goal is one we share with cities around the world: making it easier to live without owning a personal car. Achieving that goal ultimately means improving urban life by reducing congestion, pollution, and the need for parking spaces.”

Details on Uber’s purchase agreement to buy the 8-year-old bike service were not immediately made public.

According to Reuters, about 100 JUMP employees will join Uber ranks as part of the deal.

Unlike with many municipal bike-sharing programs, JUMP bicycles are dockless. This means they can be locked next to any bike rack using a smartphone app. For a 30-minute ride, JUMP bikes cost about $2.

Plus, unlike Minneapolis’ Nice Ride bikes, which we’ve used many times, each JUMP bike has a pedal-assist motor. And with its mapping, Uber promises to make finding and reserving a bike as straightforward as its vehicle service.

We’ll keep an eye out for further development of Uber’s bike fleet and any other competitors. And we’ll be sure to put them to the test.

Up Next: 6 Mistakes From My First Bikepacking Trip