Get your butt to Iowa and get in a kayak. Sound silly? We did just that. We sent an editor and a video production crew to run the state’s whitewater and record what dam removal can do for water, community, and fish health.

Editor’s note: This article was originally published in 2016; it’s updated here after a subsequent trip to Iowa as a part of our ‘Great Urban Outdoors’ project with YETI.

The Hawkeye state isn’t known for raging rapids, but it does have enough elevation change to make rivers flow. Those rivers have been pent up by outdated, deadly “low-head” dams for decades.

A new movement to replace dams with the swirling eddies of whitewater parks is gaining momentum in Iowa. 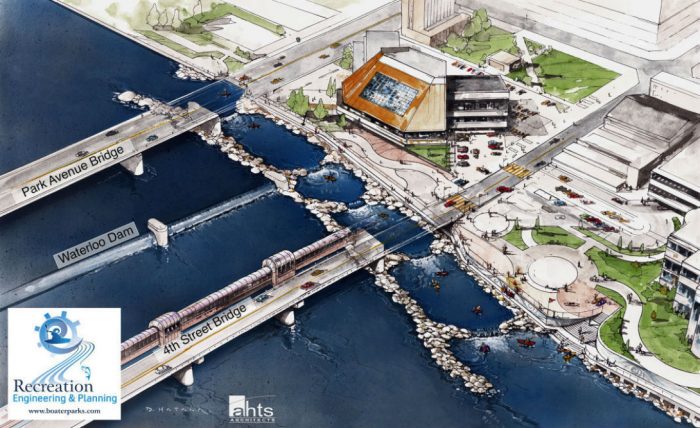 Dangerous Dams To Whitewater In Iowa

Since 2011, Iowa has converted three of the state’s 177 old dams into whitewater parks. A fourth site is in the works, with the government working toward a construction start date for next year.

A number of issues have fueled the push, such as financial, safety, and ecological problems caused by low-head dams. While they have a low drop and look benign, swimmers can become trapped under the powerful flow of moving water.

The hazard, combined with the near-obsolescence of these dams, no longer used for riverfront manufacturing, has led Iowa to fund “dam mitigation” projects around the state.

Most of the dams in Iowa were built in the 1920s and 1930s. Usually their purpose was to power a mill. After the mills shut down they provided some hydro-electric power.

Most of the dams in Iowa have served no purpose since the late 1960s. Many are crumbling and washing-out due to age.

But some communities are hesitant to let their beloved dams go. They are attached to dams for the ponds and fishing they provide, or even just for the look of it in their town. It’s a hot issue in rural Iowa, and there are reports that some community members have gone as far as delivering death threats to dam-removal advocates.

GearJunkie traveled to Iowa to further investigate. We talked to community members and produced a video for our “Great Urban Outdoors” project on the dams and the whitewater parks.

We discovered that most of the conversation today focuses on the education process about what dam modification can look like and what opportunities it provides for communities.

Molly Hanson, executive director of Iowa Rivers Revival, plays an integral part in the creation of Iowa’s whitewater parks. The group works to secure funding at the state level.

A fourth site in the works in Waterloo is projected to cost between $2.6 and $4 million.

Why Whitewater In Iowa?

Iowa probably isn’t the first place you think when you hear river rafting or kayaking. But it is beset on both borders by two major rivers, the Missouri and the Mississippi, and the state is crosscut by hundreds of waterways.

At the state’s three current whitewater parks, kayakers, stand-up paddleboarders, canoeists, and tubers of all skill levels tackle a variety of water features. 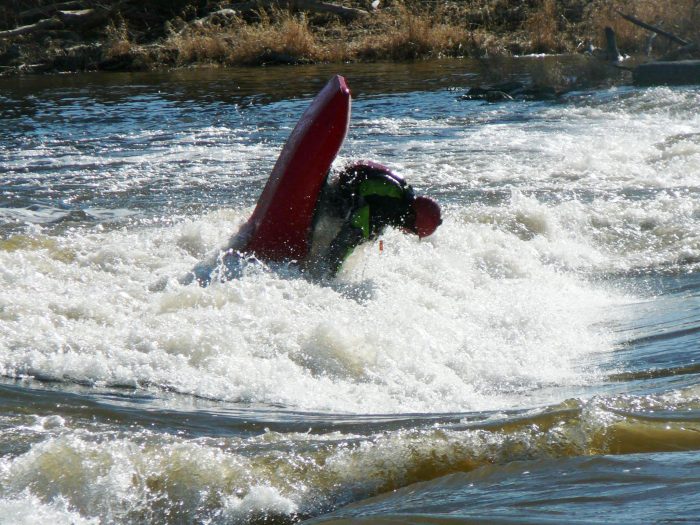 Drops, waves, and holes, some for advanced paddlers only, provide technical challenges and draw serious and recreational paddlers to small-town Iowa. Best of all, each of Iowa’s whitewater parks are free to the public.

City officials in Manchester estimate the economic impact of that park alone to be nearly $750,000 in 2015. As Iowa’s whitewater destinations draw enthusiasts from across the Midwest, out-of-state dollars flow to local retail and hospitality.

Fish Love It, Too

Since removing low-head dams at some sites, the Iowa DNR witnessed an increase in the overall number of species downstream and the populations within some threatened species like smallmouth bass.

Removing dams effectively expands and connects habitats that were once integrated. As one species thrives, so does its predator or another symbiotic organism, slowly growing an ecosystem.

You can go to Iowa and run the rapids (and have as much fun as we did). Simply put, your tourism dollars help show state legislators that the money flowing into the state from dam removal is tangible.

You can visit Iowa Rivers Revival and donate to help Iowans restore, protect, and enjoy their rivers.

Curious about dam removal in your city? Check out American Rivers to see if there is a dam removal project happening near you.