Most surfers don’t wear floatation devices, even on sizable waves. Quiksilver wants to change that with the Highline Airlift, an inflatable floatation device small and light enough that it does not encumber athletes riding big waves.

Announced today, Quiksilver claims the Highline Airlift “is the pinnacle of water safety technology.” It uses compressed CO2 to quickly inflate airbags in a manner similar to those used by backcountry skiers caught in avalanches.

It’s worth noting the brand calls out the fact that it is not (legally) considered a PFD in the U.S. or Australia, but is in the European Union. It is “part of a holistic approach to ocean safety.”

Inflatable life jackets for surfers aren’t entirely new. For several years, professional big wave surfers have had access to the Billabong V1, a big wave flotation device pioneered by legendary surfer Shane Dorian. But it is a single-use device for emergencies, and not readily available to the masses.

Hyde Sportswear launched The Wingman, a reusable, inflatable vest, on Kickstarter in 2015.

But the Quiksilver – Aqua Lung collaboration marks the first endemic brand partnership to mass market such a product to surfers. Both Quiksilver and Aqua Lung are deeply embedded in surf culture, Quiksilver as a major apparel brand that sponsors many events around the world, and Aqua Lung as one of the foremost scuba hardgoods manufacturers.

Quiksilver developed the Airlift inflation vest for big-wave surfing over the course of three years. It sought input from professional surfers, watermen, engineers, lifeguards, and divers. 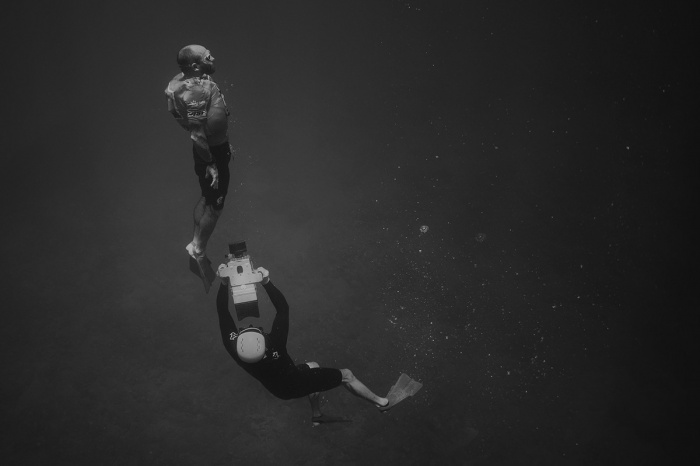 The neoprene vest has four pull tabs. Pull any one of them, and one of four carbon-dioxide cartridges inflate a heat-sealed nylon-urethane bladder. When activated, it provides buoyancy, lifting the surfer to the surface.

It also has a deflation tab located away from the inflation tabs to reduce the risk of an accidental inflation or deflation. Once out of harm’s way, a surfer can re-pack the vest and get back out to the lineup.

“Using it successfully requires strong swimming skills, ocean knowledge, collaboration with other surfers and lifeguards, and like the rest of your equipment—it must be cared for and used correctly,” the brand warns.

Similar to avalanche airbags, it also cautions users not to take increased risks when wearing the device. “The Airlift vest is a safety tool, not a performance enhancer,” the brand states.

The Airlift vest is available on Oct. 15 at Quiksilver retail stores in California and Hawaii. Internationally, stores carry it in France, Portugal, Australia, and New Zealand.

Quiksilver Highline Airlift has a retail price of $990. It’s a hefty cost that puts it in the same neighborhood as an avalanche airbag for skiers. But for those who ride big waves and want an added measure of protection, the Airlift is an exciting new product. It may save lives when surfers take falls on the heaviest of sets.

Up Next: Zac Efron Takes His Brother Camping In Columbia Ad