Among the most popular tents on the market, REI’s Quarter Dome offers a solid shelter that’s light and reasonably priced. We got a first look at the to-be-released 2017 tent last week in Utah. 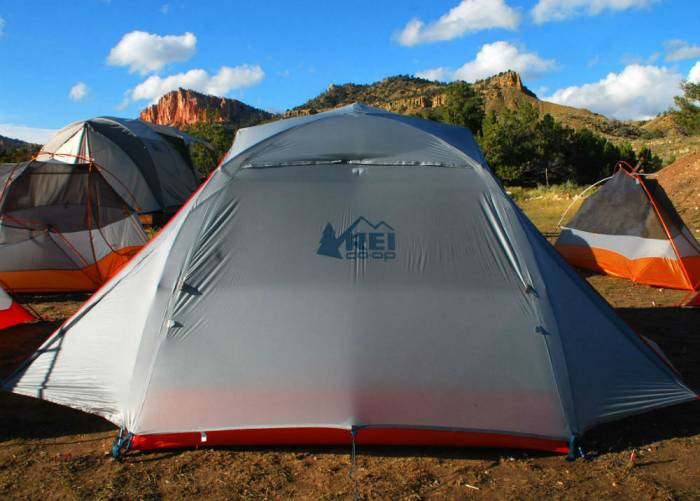 A complete redesign from the ground up, the new one-, two-, and three-person Quarter Dome (“QD”) tent line has more room, simplified setup and rainfly attachments, an improved “footbox” design, and a significant change in flame-retardant treatment, among other changes.

“We started with a blank page,” said Nasahn Sheppard, REI’s divisional vice president of product design. “Usually, we’ll build on the previous model. This time, we began by asking ourselves, ‘What do we want our tent to be’?”

I took the QD 1-person tent for a test in the rugged and beautiful surrounds of Bryce Canyon National Park. The two-day backpacking trip was muddy, rainy, and cold — perfect conditions to preview what REI hopes will mark a significant upgrade in its tent brand cache.

Fortunately for me, the rain lifted in Bryce Canyon just long enough to set up the QD 1, which wasn’t long at all.

The new color-coded poles and buckle-on rainfly made for a very easy and intuitive setup. According to the iPhone stopwatch, I had the tent and rainfly pitched in less than four minutes.

The pole attachments and general setup is similar to the previous model REI QD tents. Anyone familiar with those will have no problem figuring out the 2017 line.

The biggest improvement in setup has to be the rainfly. The previous QD fly had to be tucked into the bottom of the tent pole with grommets. The new buckle attachment made securing and snugging the fly easy.

Another nifty improvement for the one-person model is a second vestibule on the non-door side. It’s small, but a great addition that allowed me to free up some space in the main vestibule.

Renowned adventurer Andrew Skurka teamed up with Sierra Designs on a lightweight tent for hikers. We put it to a review in the Rocky Mountains. Read more…

REI’s addition of reflective guy lines for the 2017 tents brings it in line with other manufacturers who recognized customers are tired of tripping through campsites at night.

The field of ankle-high cords lit up under my headlamp and was another welcomed improvement.

Bigger is better, and less is more. I am 6’3″. This can mean that sitting up in a small tent requires hunching over and bending my neck away from walls. The QD 1, the smallest in the new fleet, had enough headroom for me to just sit upright in the morning. 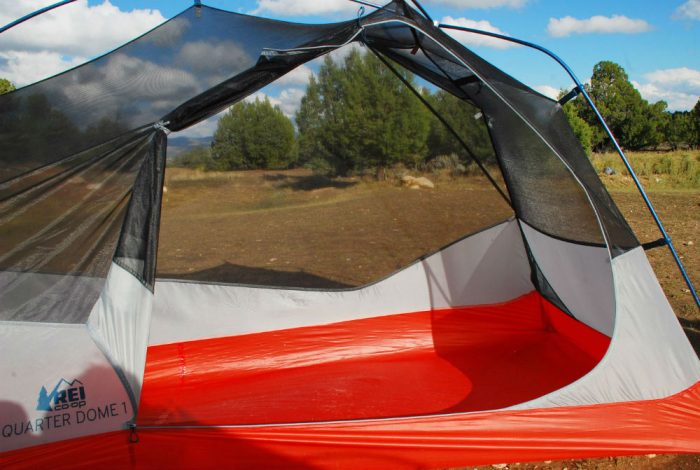 The greater area inside the tent also allowed for a larger door. Again, at 6’3″, this was a noticeable improvement in comfort getting into and out of the tent.

Increased interior space translates into a heavier tent, but not much. REI switched to a lighter material to offset the extra fabric needed. Based on which tent you’re looking at, it’s an added 4 to 5 oz. compared to 2016 models.

Unless you’re ultralight backpacking, this seems like a fair trade off for some extra space. While these tents do bulk up a touch, they are still competitive with other free-standing tents in a similar price range.

Final pricing could be available as early as October once final “material and tension adjustments” are complete, according to Sheppard. 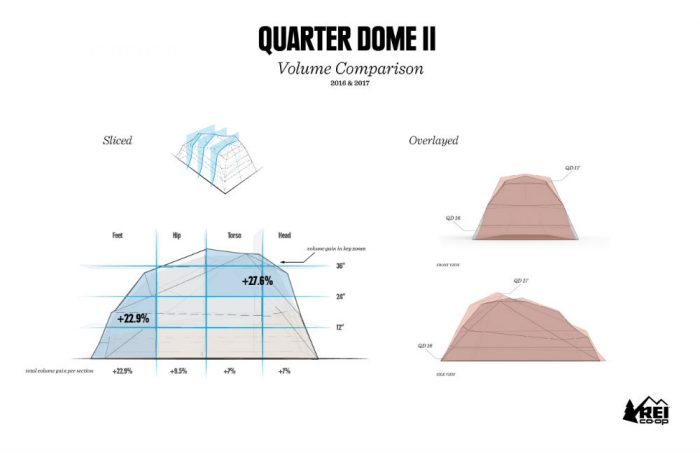 One element of the QD that was not increased was the use of flame retardant. REI “transitioned” the flame-retardant chemicals used in the tent material to reduce the use of potentially harmful agents found in older tents.

Could setting up a tent be a hazard to your health? A Duke University study reveals known carcinogens present in tent fabric from five brands. Read more…

This comes on the heels of a report that flame-retardant chemicals, some of which have been linked to carcinogenic effects, can leach into users’ hands, skin, and lungs.

REI’s new line of QD tents is the beginning of a branded gear upgrade. It noted that its line of Half Dome tents would receive a similar upgrade in the near future. 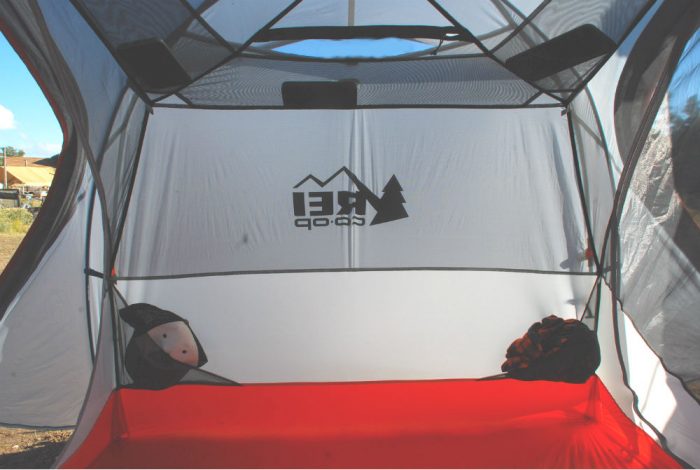 “It’s time for us to take the next step,” Sheppard said of the 2017 gear. “If we don’t get better, we’ll be left in the dust. This is the first step in us upping our game for our members.”

In addition to the QD tents, REI will release new backpacking packs in its Flash line, new sleeping bags, new sleeping pads, and a flat-bottom tent – the QD Air (which we’ll have a chance to test, stay tuned).

As we reported this year, REI publicly rebooted its gear as a “premium brand.” The tents are an upgrade in convenience and comfort.

This spring, retail juggernaut REI says it will lead the industry in quality and performance. We put a couple of the new products to a test. Read more…

In the new line, REI’s seemingly minor changes were big insights. Reversing the rainfly door so that it doesn’t fall into the tent shows the brand is doing due diligence.

In all, the tent worked great, It’s clearly the first step in what could be big changes for a brand that’s on the way up.

Up Next: First Look: Primus Tupike For The Campground Gourmet