The Scottish phenom recently visited Adam Ondra in the Czech Republic. The mission? To see whether he could climb anything. Spoiler alert: He could.

Will Bosi flat-out crushes. He solidified his presence on the international climbing stage last year with repeats — and a first ascent — of the hardest routes at Raven Tor, England, where the climbing is heinous, to say the least. Since then, all he’s done is put up mid-5.15 routes in Siurana, Spain, plus a slew of V12 and harder boulder problems.

If you are into hard climbing but you don’t know who Bosi (pronounce it BOH-zee) is, those days are numbered. Just a few days ago, the 23-year-old climber sent every boulder problem (including ones that didn’t exist until his arrival) at a crag on Adam Ondra’s doorstep.

To say Bosi had a good climbing day is like saying Kobe Bryant had a “good” game when he dropped 81 points against the Raptors in 2006.

The reality is that Bosi was close to otherworldly — simply walking up to climbs few of us will ever contend with and summarily pulling them into the ground. One after another.

But if you ask Bosi, all he wanted to do on the trip was see if he could pull onto the tall, steep block at all. 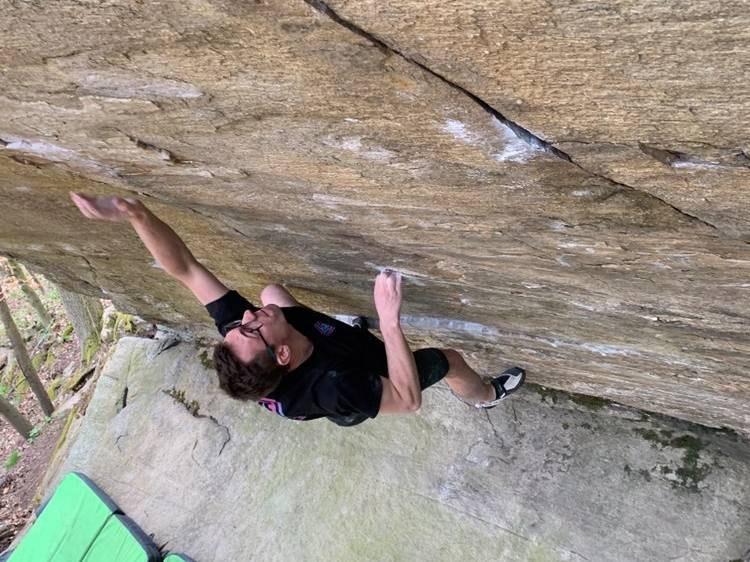 “One of the things I wondered before the trip — I was almost kind of nervous — was ‘oh, I wonder if all the grades are just really, really hard, and I’m going to come here and not to be able to do anything,” Bosi recalled, laughing. “So the mystery of it really drew me here.”

The “mystery” Bosi’s talking about is a lot bigger than numbers, though. Growing up in Edinburgh, he said, wasn’t conducive to climbing outside. The closest crag was a pile of “really, really bad,” breakable rock that didn’t at all engender climbing, let alone performance.

The only good cliffs were a 2-hour drive away. So, the young Bosi spent a lot of his time in the gym. Envisioning sequences and linking moves on plastic, he said, gave him the physiologically creative foundation his climbing now exhibits.

“It just made sense to climb indoors and compete,” he said. “I’ve not done that many first ascents, and it’s only in the last year or so that I’ve been really getting into it. But it’s just so interesting because indoors — even though working out the moves is still complex — you go outdoors, and you have no idea whether something you’re looking at is even possible.

“You can have hundreds of different foot and hand positions for any boulder or route! And it’s so exciting to work out or find how it goes. And when you find a sequence, and suddenly you know how it works, a massive lightbulb goes off in your head. It feels amazing.”

Bosi may have felt amazing during his legendary day in the Czech Republic, and he clearly amazed Ondra. The more obvious line on the leaning bloc goes straight up the face — “Charizard” goes out low and left, on holds that appear nonexistent in the cellphone footage.

As soon as Bosi turns the corner onto easier terrain on the send, Ondra can only laugh. Standing by, Bosi’s girlfriend said (incredulously), “This kid.”

This kid, indeed. For Bosi’s part, he’s not caught up in the hype. He said Ondra lived up to his worldwide reputation of psych and encouragement. The Scot also credited his inspiration for the trip to Ondra, as well as prolific Czech first ascensionist Martin Stráník.

“Adam’s posted the odd photo or the odd video of this home area of his [near Brno, Czech Republic],” he said. “But there’s never been that much information about them. When I was younger, I’d watch this 5-second clip of ‘Vasil Vasil,’ and that was it. You know it’s going to be really hard, but you don’t know anything else about it. So it always had this mystery to me — I always wanted to come check out all these crazy hard lines by him and Stráník.”

What’s next? In all likelihood, more of the same. Bosi’s headed north shortly to try to solve the sandstone puzzles on the other side of the Czech Republic. When the youngster gets there, and wherever he goes after that, we expect more precocious first ascents.

“Just trying to make every move you can think of work,” Bosi said of his creative approach. (“Bulbasaur,” for instance, reverses “Charizard,” and then ascends “Fénixovy Slzy.”)

“As I’ve gotten older and gotten more freedom, rock climbing has definitely been the biggest motivator. The lightbulb moment — it’s something that I’m really wanting to do a lot more of in the future.”