In the upcoming Arc’teryx film, Shaped by Wild, we get an intimate look at some of the most striking landscapes and colorful cultures in North America.

Do you know where Arc’teryx calls home? It’s in the British Coastal Mountains, which run over 1,000 miles from the Yukon all the way down to Vancouver. That’s where the brand was founded. And the Arc’teryx film, Shaped by Wild, takes us on a journey deep into that region and the cultures of the people who call it home.

Packed with some of the most breathtaking cinematography, the film is shot atop mountains, through lush forests, and at sea. You’ll see the scenery through the eyes of natives who are intimately familiar with the region, and also expats who were drawn to its beauty. The trailer for Shaped by Wild gives a real sense of just how vast and magical this area truly is.

The making of the film collaborated with the Xeni Gwet’in traditional territory and the homelands of the Tŝilhqot’in people. The film was shot on location within the unceded territory of the Kwakwa̱ka̱’wakw, Lil̓wat7úl, as well as the Sḵwx̱wú7mesh people. It paints a picture of how this area and its people were shaped by the wild.

Arc’teryx will premiere Shaped by Wild at the Arc’teryx Backcountry Academy in Whistler, British Columbia, on Feb. 9-12. All proceeds will be donated to the event’s beneficiaries.

Tickets cost $10 CAN, but they’re sold out at the time of writing. You can get on a waitlist on the Arc’teryx Backcountry Academy website. 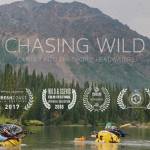 A bikepacking team explores the effects of mining on the sacred headwaters of northwestern British Columbia. Typical of the area, the video features glacier-fed rivers, mountain biking, and bears. Read more…