Our resident overland expert, Bryon Dorr, scoured the 2021 Overland Expo West event in Flagstaff, Ariz., to find the coolest adventure rigs out there.

I’ve been at every Overland Expo West and East since 2012, living on the road full-time for almost 8 years during that period. So I’ve seen my fair share of cool overland adventuremobiles.

The 20 vehicles below are the overland adventure rigs that caught my eye at this year’s Overland Expo West event. There were cool rigs in every direction I looked, but these are the ones that stood out from the crowd. 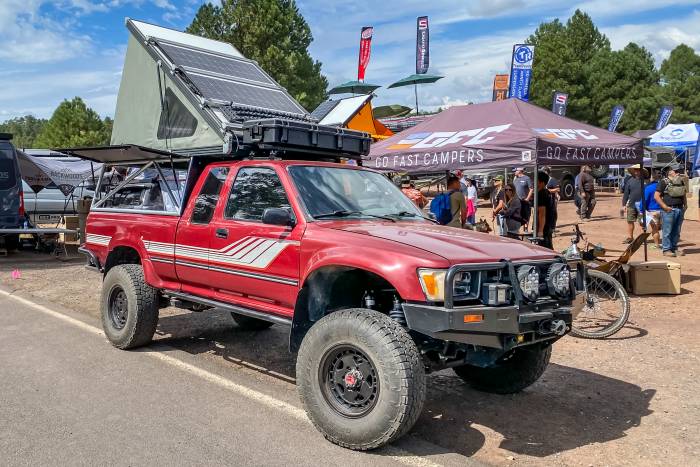 Of Desk to Glory fame, Little Red is Richard and Ashley Giordano’s 1990 Toyota pickup. This classic pickup has gone through a few versions of modification and already traveled most of the Pan-American Highway.

With big adventures on new continents on the horizon (once borders open up again), Little Red got some recent upgrades. Notable are the Go Fast Campers topper, Goose Gear camper buildout, custom long-travel suspension setup, Corbeau seats, and a fresh-built 22RE motor.

If you haven’t already, but sure to follow Desk to Glory. Richard’s photography is world-class, and Ashley’s writing is up there with the best of them.

Events are happening again, and Overland Expo West 2021 in Flagstaff, Ariz., was as busy as ever. We traversed the entire massive show to search out the best new products hitting the market. Read more… 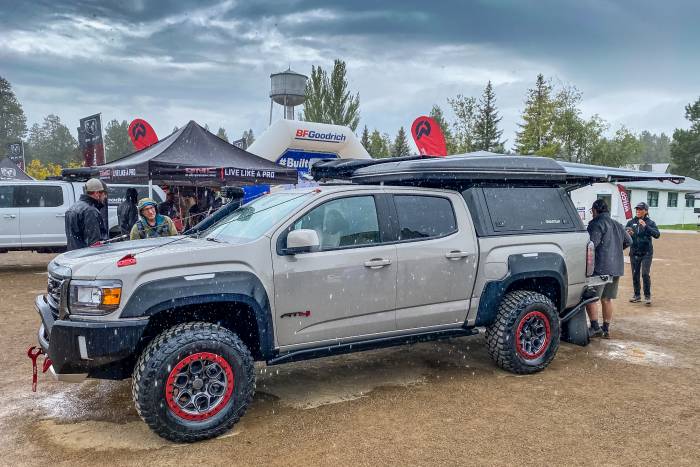 The GMC Canyon AT4 Concept made its debut in July at Overland Expo MTN West, but it’s too cool not to share again.

Check out our full write-up on this very impressive build, which we hope to see a version of finding its way into production soon. 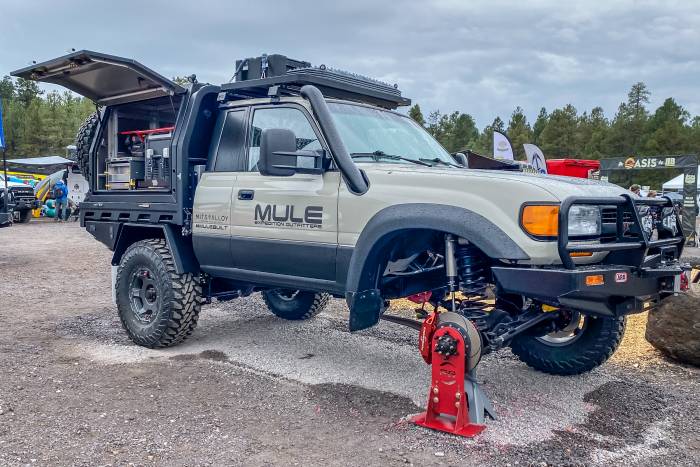 The folks at Mule Expedition Outfitters cut a 1992 Toyota Land Cruiser 80 series in half. Why would they do such a thing? Well, because they could — and to build this monster truck to show off their new line of MITS Alloy flatbeds.

Mule is known for building some incredibly well-engineered and buttoned-up overland rigs, from VW Syncro vans to big LMTV builds and everything in between.

Some highlights of the Mule Wagon are an LS3 V8 under the hood, 37s mounted to TerraFlex 80 Series wheels with quick-deflate valves built in, PowerBrakes, OME BP51 suspension, and so much more.

Expect to see this rig making the show circuit on the West Coast, as Mule is based in Issaquah, Wash. 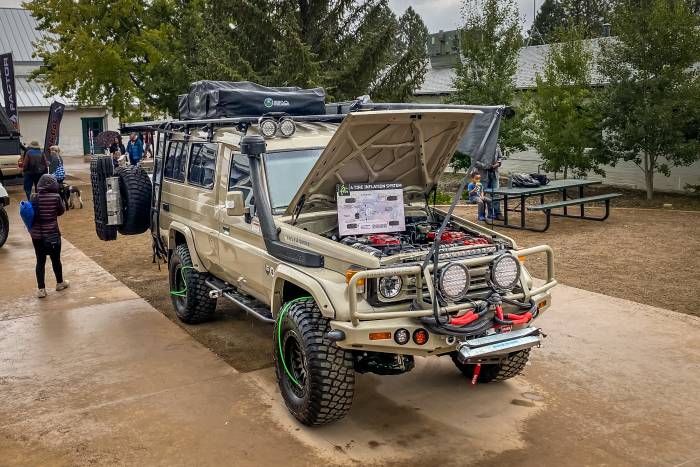 Martin, of Dakar Tundra fame, continues to build some really cool imported Toyota vehicles. This time around, he’s built his vision of what a modern 70 Series Land Cruiser Troopy would be if built by Lexus and then upgraded with all the off-road and overland toys you could ever want. 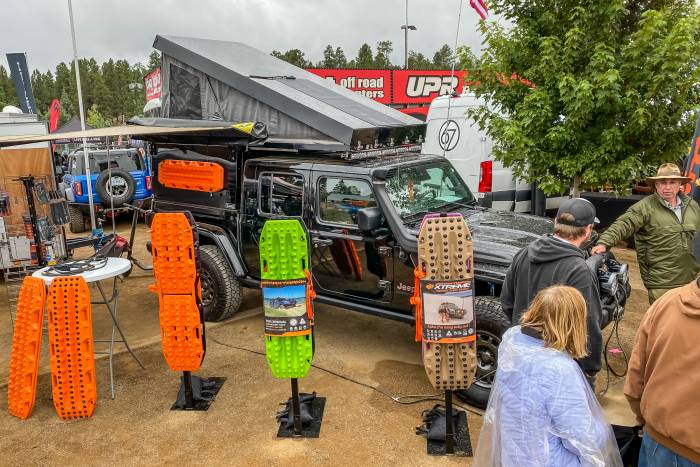 In the Adventure Imports booth, behind all the Maxtrax, is the company’s show truck, a fully sorted, super clean Jeep Gladiator overland build. The list of mods is extensive, but the highlights are an AT Summit topper, King shocks, AEV front bumper and wheels, Eezi-Awn Bat 270 awning, MSI truck-bed drawers, Redarc power management, diesel heater, etc.

If you ask owners Laura Chain and Matt Scott what their favorite upgrade on this truck is, I’d wager they’d say the Goose Gear rear-seat delete. It gives Dakar, their greyhound rescue, a comfy place to relax on adventures. 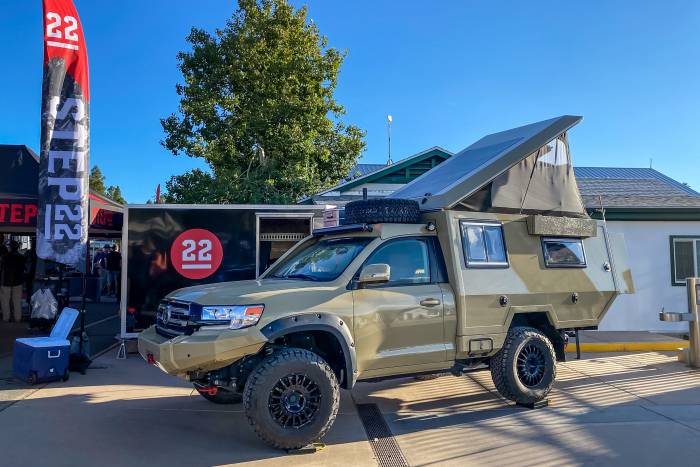 Spotted in the STEP 22 Gear booth at Overland Expo West, this 2017 Toyota Land Cruiser 200 Series is a U.S.-spec truck that was shipped to Maltec in Germany for camper conversion and upgrades. It’s owned by a husband-and-wife duo who recently moved into the rig full-time.

Is there a better combination of comfort and capability for a two-person overland adventure? You’d be hardpressed to find one! 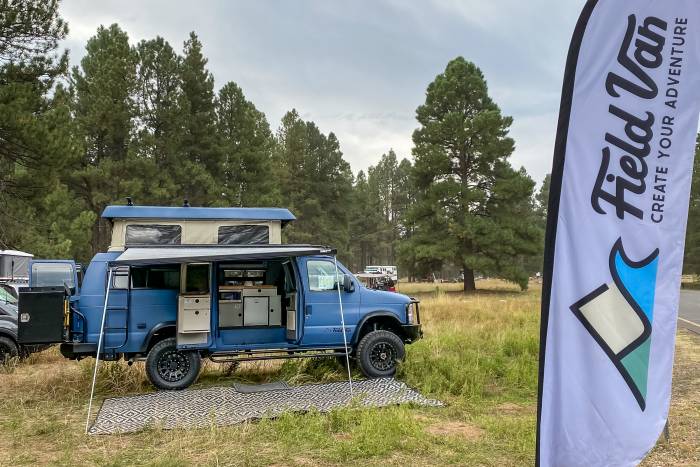 The build starts with a Ford E350 V10 chassis cab van, has a custom stout 4×4 system, and a composite wide-body shell with a pop-top roof. From there, options are nearly limitless, with layouts, camper systems, and off-road upgrades. 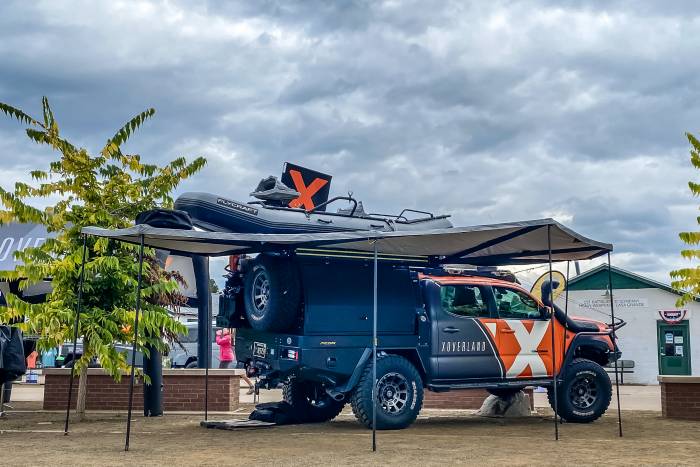 This 2021 Tacoma TRD Pro build is the latest addition to the Expedition Overland fleet of impressive overland vehicles. They call this build Atigun, and so far it’s been with the team on their 2021 Alaska trip.

You can find out more about this adventure machine here, and all things XOverland here. 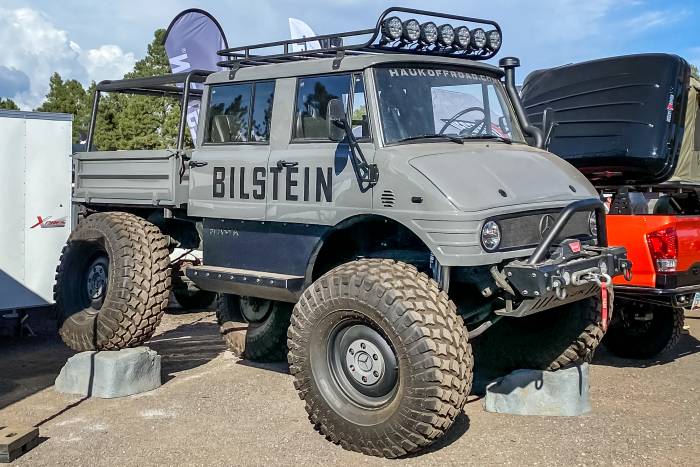 This is possibly the only rig on this list that wouldn’t be considered an “overland” vehicle build. There are no living quarters or systems on this rig, but it’s well-suited to tackle the road less traveled.

This Mercedes-Benz Doka Unimog was built by Hauk Offroad as a promotional vehicle for Bilstein. This extreme Mog was built on Amazon Prime’s “Hauk Machines.” 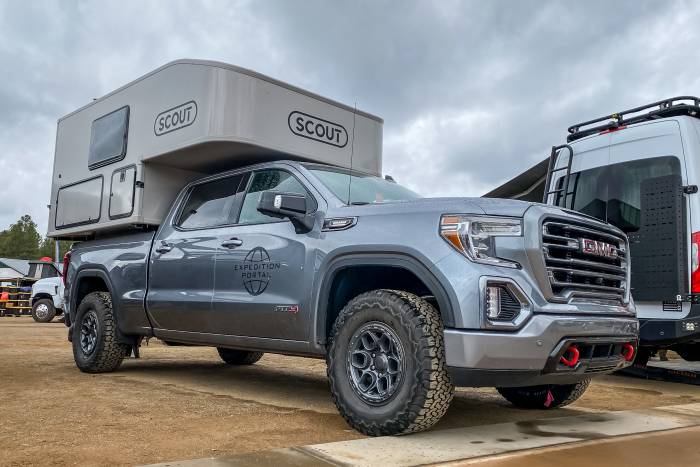 Take a stock GMC 1500 AT4 — with some upgraded, quality wheels and tires — and add a Scout truck camper. The combo is clean and simple while being comfy and capable. It’s Scott Brady’s, owner of Expedition Portal, daily ride and overland adventure machine.

We featured the Scout Camper, as it’s a unique, stripped-down, lightweight camper with all the features and systems you could want. 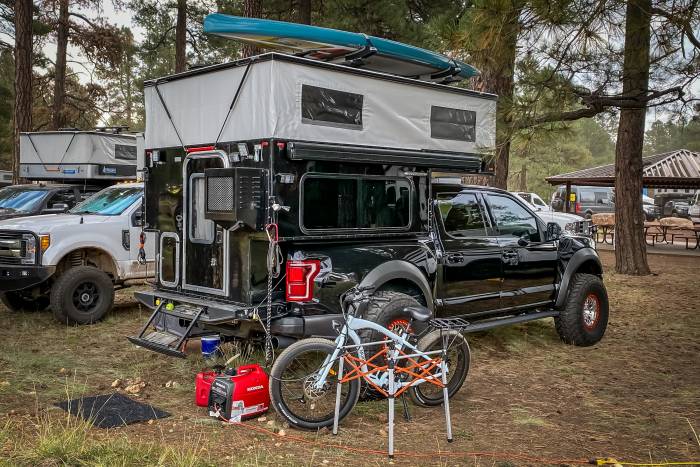 It’s hard not to like a Ford Raptor setup for adventure. This one features a matching black, smooth-sided Four Wheel camper (FWC) with AC and a rack for adventure gear.

We love how the integrated Ford tailgate step is perfect for camper entry/exit. 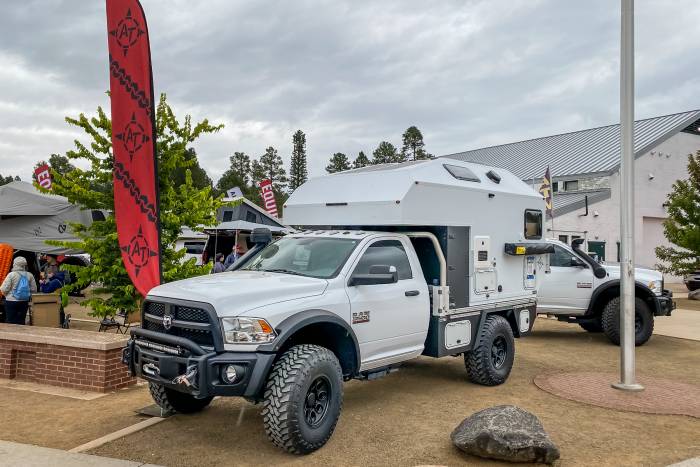 We broke the news about the AT Overland Aterra Camper back in February. Those early renders have now materialized into this truly impressive overland truck camper.

After Overland Expo West, we got a chance to go on an off-road adventure with Mario Donovan, AT Overland Equipment owner and product designer, in this RAM/AEV Aterra truck camper build for a proper deep dive. Full story coming soon. 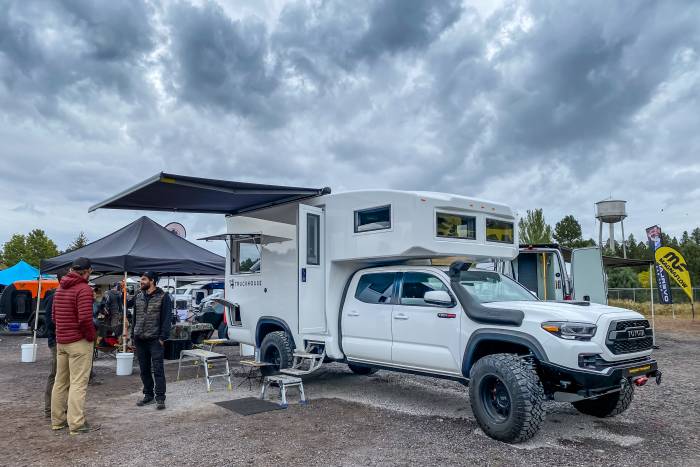 We already dove deep into this Sunraider-inspired, Tacoma-based, composite overland RV, but we finally got a chance to look it over ourselves at Overland Expo. As expected, it’s a very cool adventuremobile in every way, besides being built on the -arguably- wrong chassis (as GVWR is far exceeded).

The TruckHouse BCT is a beautiful and well-built adventure machine. It will cost you between $325,000 and about $450,000 to buy one. For that money, you get a stretched and strengthened Toyota Tacoma TRD Pro with long-travel custom suspension on 35s and a well laid-out and made composite camper. Options include things like a supercharger, more solar and batteries, as well as all kinds of off-road goodies and living systems upgrades.

Production has just started on the TruckHouse adventure machines, with a growing list of clients. If you order one today, expect to drive off into the sunset next summer. The vehicle will retain its Tacoma VIN and be insured as a custom RV. 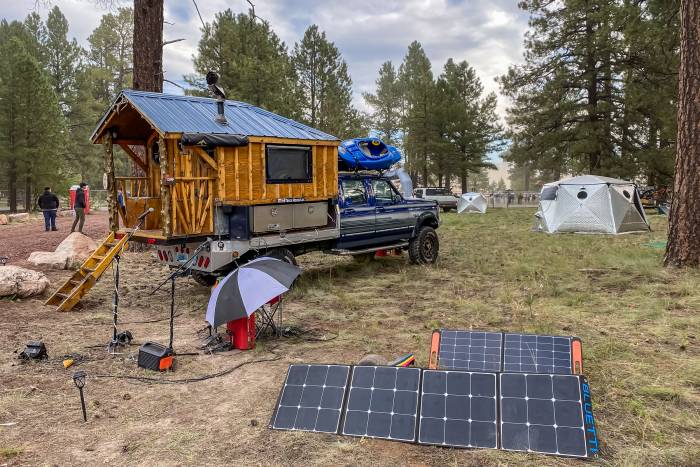 Tim Johnson, of Truck House Life, built this tiny home on wheels. Scrap wood from a cabin project he built in Alaska makes up the bones of this impressive overland home. The base truck is a 1996 Ford F-350 4×4 with the legendary 7.3L diesel engine. With whitewater kayaks on board, Johnson is ready for adventure.

Check out the Truck House Life YouTube channel to find out more about this build and Johnson’s adventures in it. 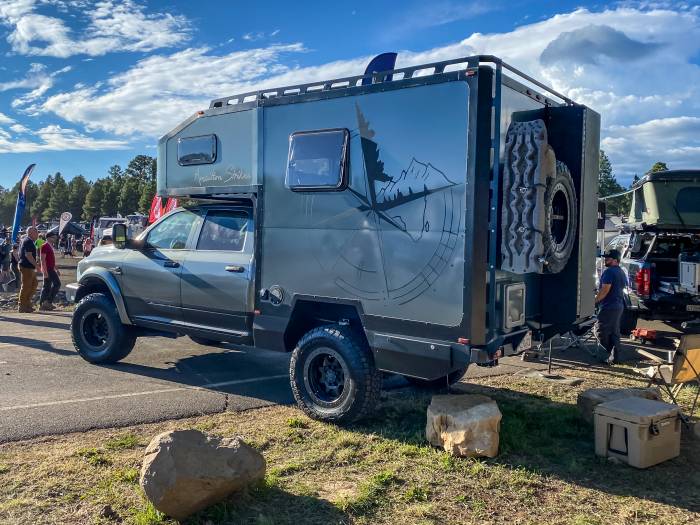 This self-built camper took 2.5 months to create and, amazingly, with a budget of only $20,000. It’s made of foam-core panels with aluminum framing, all of which were built, not bought. It features a king-size bed, an air heater, water heater, shower, toilet, and even a truck-to-cab pass-through.

Riley and Courtney Casey built this rig themselves, atop a 2015 RAM 3500 diesel, and live in it full-time. Check out more about the build on their Ambition Strikes YouTube channel. 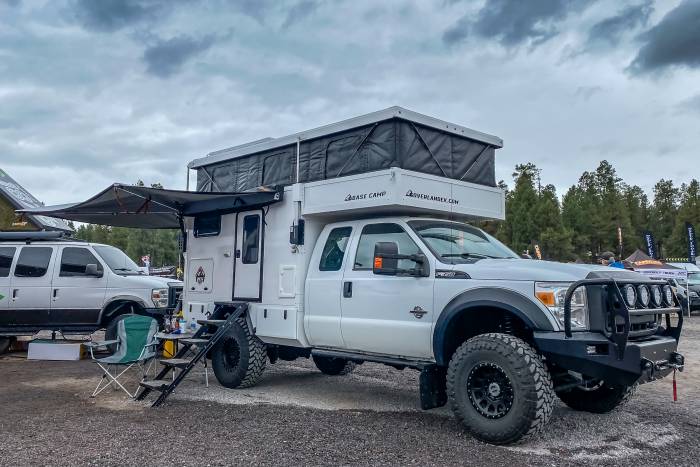 Pricing for the OEV Base Camp will start at around $225,000. OEV is taking orders starting in January 2022, with the first deliveries in spring 2022. Production is in Alberta, Canada, with seven U.S. dealers.

We’re still drooling over the EarthCruiser Terranova camper, as it’s well-suited to all sorts of overland adventures around the globe. The composite pop-top camper is basically a yacht on wheels and is built to a higher caliber than many overland vehicles. Read our full write-up. 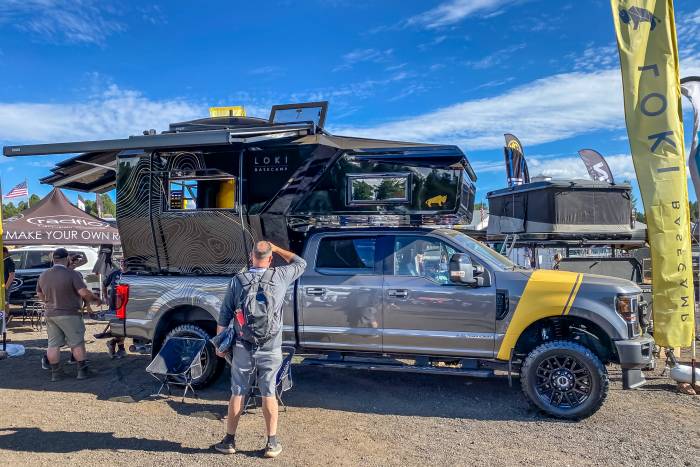 I finally got to see the LOKI Basecamp Falcon Series truck camper in person. It’s a super interesting design and a full-featured camper. Its only real issue is its weight, as it comes in at between 3,000 to 4,000 pounds. It will put any one-ton truck way over GVWR when the camper is loaded with water, gear, supplies, fuel, and people.

The next camper from LOKI is the Icarus Series. It will be out in 2 weeks and is an all-composite unit, a bit smaller than the Basecamp camper. It will weigh about 2,000 pounds and cost around $70,000. Stay tuned for more; we’ll get our hands on some images and specs soon. 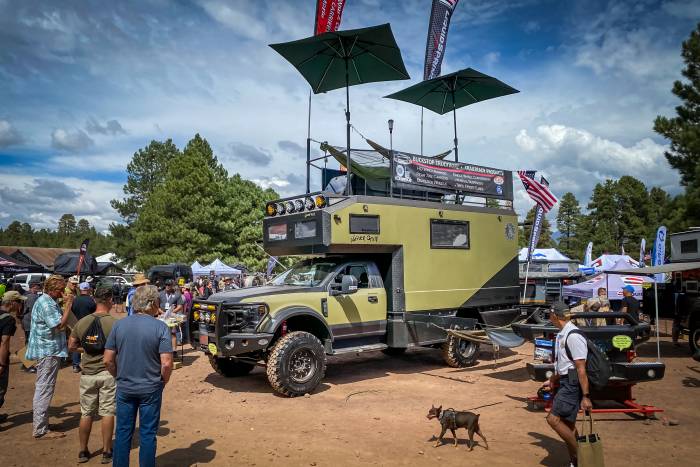 Erik Petroni, of Never Quit Overland, has built a number of unique rigs, from vans to FUSOs to chassis cab vans. And now he’s got this Ford F-550 chassis-based camper under his belt. This latest build is a monster of a truck with a ton of unique details. Think bulletproof glass, swing-out hammock hangers, a rooftop patio, and so much more.

This build was spotted in the Buckstop Truckware booth. It has a Buckstop bumper, front fenders, single rear-wheel conversion, and a Liquid Spring suspension system. 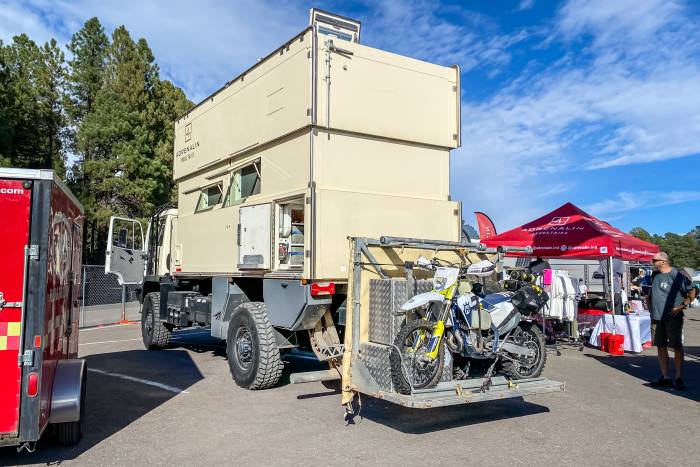 This monster is a 2012 Titan XD 4400, which is nearly new, and one of only about 50 BAE Systems FMTVs that were made for the civilian market. With a 6.7L diesel, 4WD, and 46-inch military tires with central inflation, there isn’t much that will stop this beast.

The Action Mobil camper on the back was taken off a 2012 MAN truck that was wrecked while traveling in the U.S. by a European couple. The MAN truck was totaled, but the camper is said to have come out unscathed, besides a busted graywater tank that has been fixed.

The camper is one of only a few that Action Mobil made with a hydraulic lifting top. It’s fully outfitted for extended off-grid adventures and, in my opinion, is just missing a pass-through to the cab.

The vehicle was assembled by Adrenalin Industries and is currently being sold at no reserve on Bring a Trailer (auction ends Oct. 5).

We also scoured the show for all the best new overland gear on offer, which you can check out here: Best of Show: 15 New Pieces of Gear Spotted at Overland Expo West 2021.