Winter was disappearing near our headquarters last week in Minneapolis. But we had one last cold-weather gear test to perform, and the lake ice under a nearby bridge (wet, smooth as glass, still a foot thick in the shadows) would provide a perfect venue for the review. 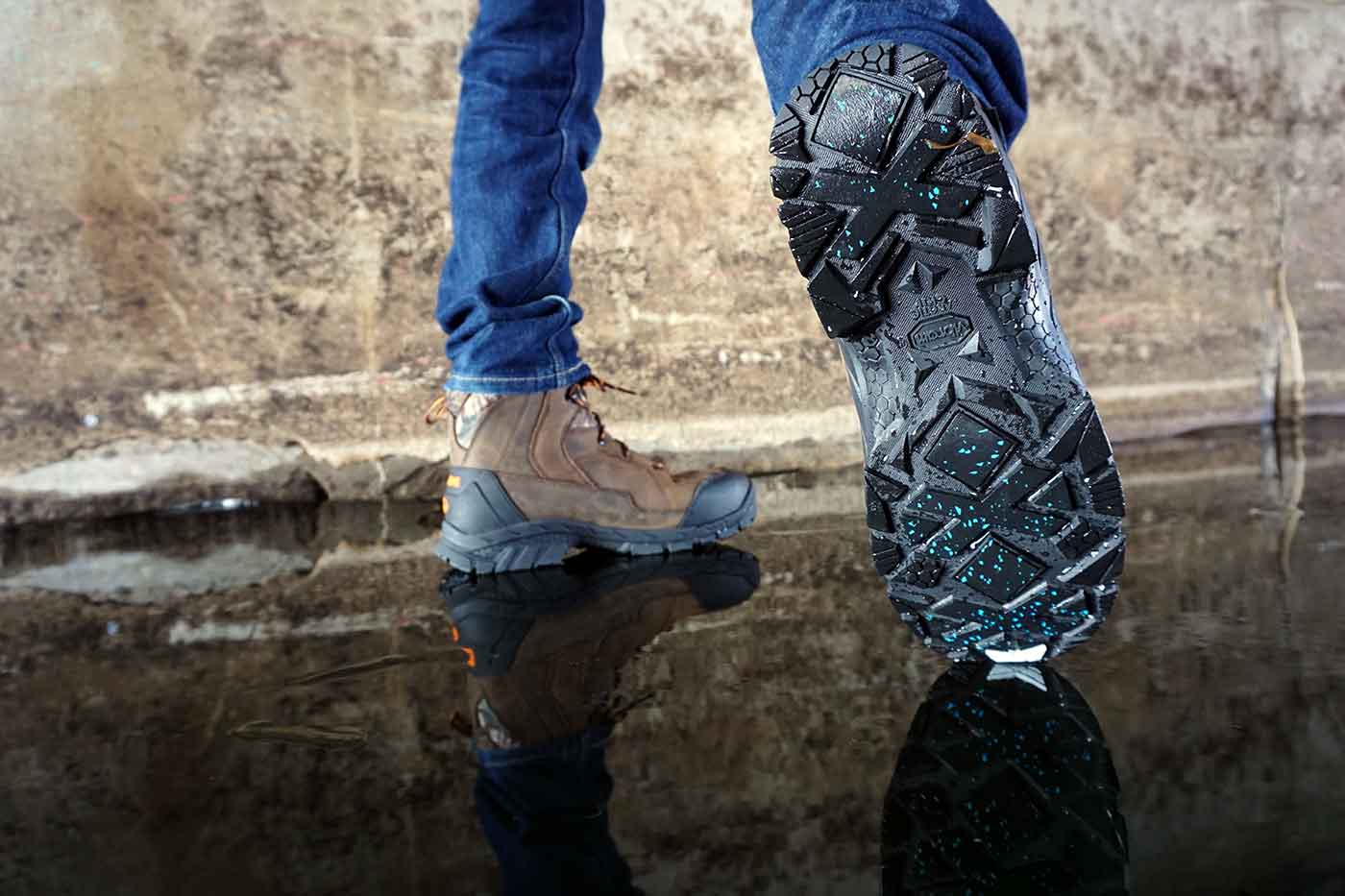 I laced up the test subject, a pair of Wolverine boots adorned with to-be-released Vibram Arctic Grip soles, and then I climbed over a railing onto a frozen plane. The rubber underfoot, a new invention, was purported to grip wet ice almost like metal spikes.

The boots — Wolverine’s Crossbuck FX Ice+ — won’t come to market until this fall. GearJunkie is among the first publications to receive any footwear with the Arctic Grip soles, which for this year Vibram will make available exclusively to Wolverine Worldwide and its brands.

Arctic Grip is advertised to give “up to three times better grip” on wet ice surfaces. It does this via lugs made of a special material that feels gritty to the touch. The company will not reveal any details on the materials used, which are a proprietary mix of rubber and other constitutes.

On ice, the Arctic Grip lugs turn blue, which Vibram calls a “thermochromatic” effect. Though the color change is only aesthetic, it’s made to call attention to the innovation built on the tread.

For walking on wet ice, the Arctic Grip technology indeed adds a level of grip heretofore unseen from an all-rubber sole.

Under our bridge, I took a couple fast steps and attempted to slide. The Vibram sole, which mixes traditional winter-oriented rubber with the Arctic Grip lugs, did not immediately “stick” to the ice; I was able to glide on my boots a few feet.

However, while walking on the wet ice, the Arctic Grip shined — with each step the boots subtly gripped to keep me upright and confident on ice so sheen I could look down and see my reflection in the frozen water below.

The technology was most noticeable when compared against another boot. Arctic Grip does not take the place of crampons or even something like YakTrax. But compared to normal hiking boots it’s an impressive upgrade for anyone who spends time tromping around in the cold.

Basically, the Arctic Grip gives a bit more traction on ice. You are able to steadily walk across glare, wet ice without hesitation. Sudden movements and short bursts, however, still are subject to the slick properties of frozen water underfoot.

On surfaces other than ice (mud, dirt, rock) the Arctic Grip sole also works fine as a normal boot sole with hefty lugs similar to what you’d find on other Vibram-equipped soles. We haven’t done enough testing with these yet to talk durability.

Beyond the unique soles, the Wolverine Crossbuck FX Ice+ are nice boots, basic midweight hikers that are waterproof and versatile enough to use through winter and the mud seasons on either side.

The camo motif is a nod toward the hunting market. However, the Crossbuck’s build leans toward a traditional ankle-high hiker design, and these boots will be at home on any trail.

Vibram’s Arctic Grip soles will be seen on footwear from Saucony, Merrell, Sperry, Chaco, CAT Footwear, and other Wolverine Worldwide brands this fall.

In 2017, Vibram will offer its ice-gripping sole to brands beyond the Wolverine group. Check it out if you’re in need of extra traction — and the confidence that comes with it — on ice anywhere outdoors when the temps drop low and the ground gets slick. 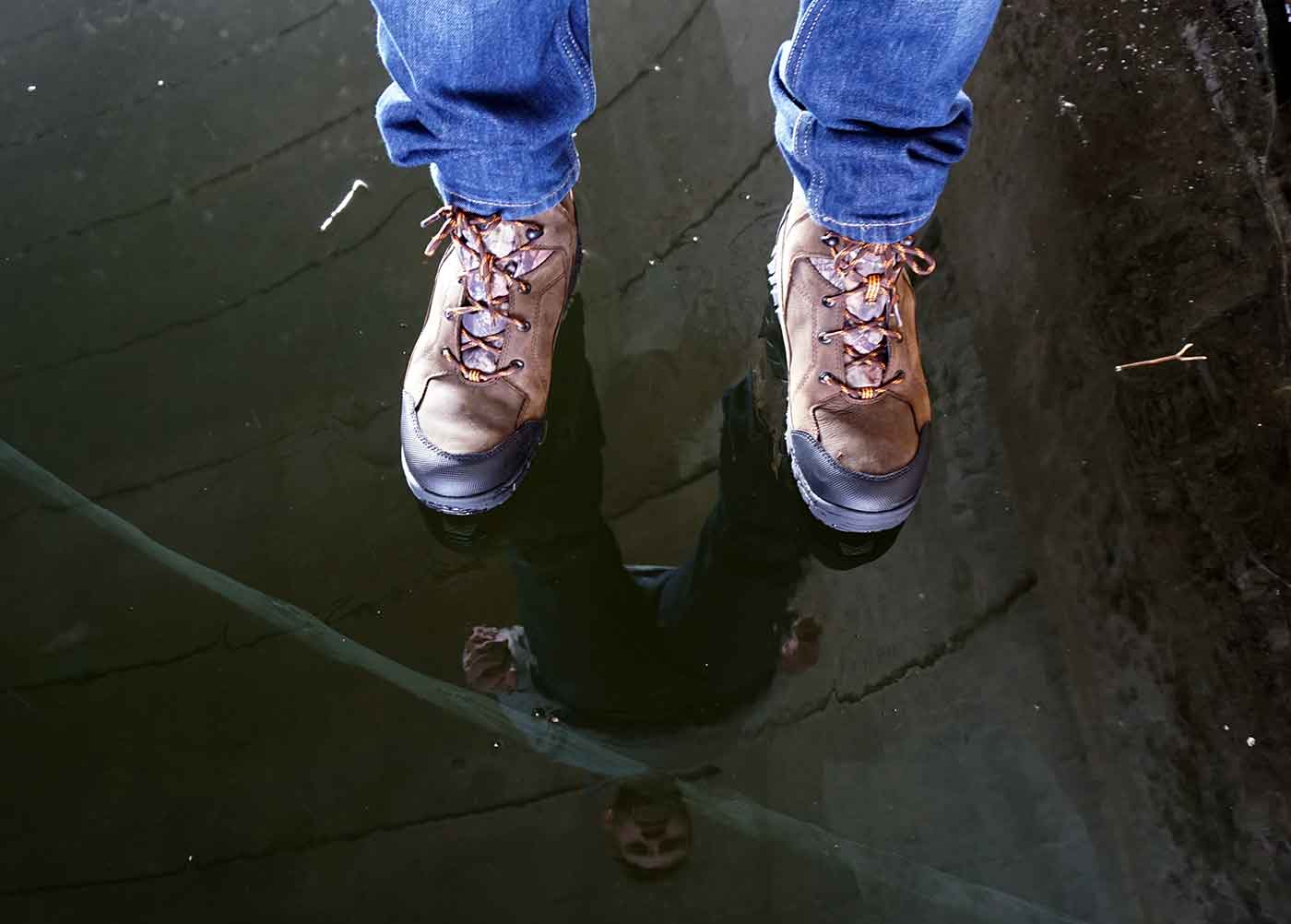