Extended trips can mean you’re scrounging to find electricity. The Sherpa 100 Solar Kit is a reliable source of juice that can power devices up to the size of laptop computers.

The Sherpa 100 battery pack and Nomad 20 Solar Panel form a reliable system to generate electricity anywhere and store it for later use. Touted to be able to charge “all the gear in your kit,” this package product is a high-price, high-power option with USB ports and a “wall-outlet” AC inverter plug. At $600, the product is aimed at pro photographers, explorers, and anyone in need of lots of electricity far off the grid.

I put the combination to a test on a road trip last month and found it effective, although with some limitations. Read the following review for the details. 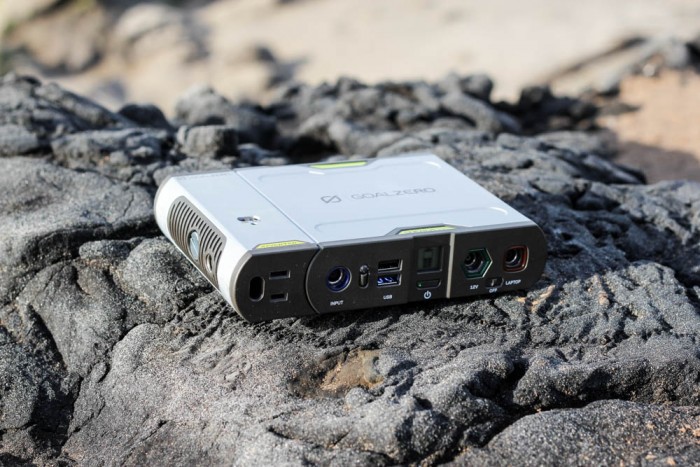 The Goal Zero Sherpa 100 is a 20-amp battery with an array of ports, including two USB ports for phones and tablets, a 12V port for lights, a port specifically for laptops, and a detachable AC inverter to plug in small electronics that run off AC 110 (like U.S. wall outlets). Note, this inverter will be overpowered by even small appliances, so don’t plan on operating power tools with it.

The power pack can be recharged from a solar panel, a wall outlet, or a 12V car outlet. Color-coded ports make it easy to figure out which plug goes where, an otherwise confusing task with the bundle of cords included.

An easy-to-read power meter shows how much juice is left in the pack in 20% increments. A small LED light is on the front of the pack for illuminating dark spaces.

We used the Sherpa 100 over a five-day van trip up the California coast. The sun was plentiful, which was nice because most of the spots we chose to pull over for the night didn’t have power.

During the day, we would plug in the solar panel and let the sun go to work. In the evening, the Sherpa provided more than enough power to run an array of LED lights in our campervan.

We also charged laptops, phones, and a Bluetooth speaker from it during the days and evenings and never got the pack to drop below 20% power capacity. 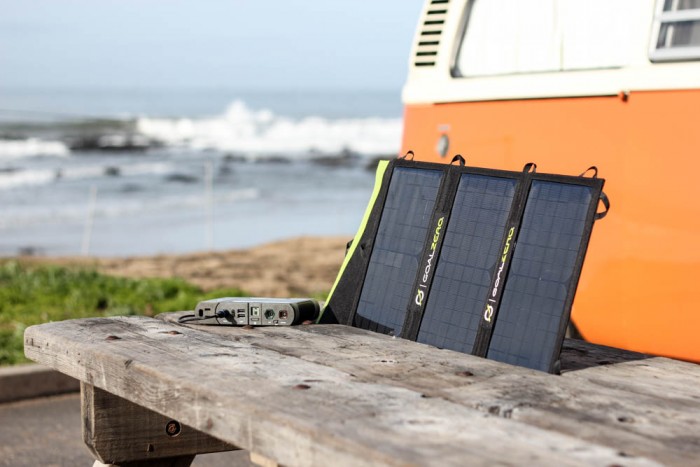 The Sherpa 100 Solar Kit comes with the Nomad 20 solar panel, the beefiest of Goal Zero’s smaller panels. Like all of the company’s solar panels, it comes with a variety of attachments that can be plugged into any number of gadgets as well as chained to additional panels to create your own little array.

Producing a maximum of 20 watts, it takes a long time to charge the power pack. In fact, we were never able to fully charge it during the day due to semi-cloudy conditions. This is one of the bigger limitations of the system, and one that has been noted by others.

During our test, we usually set the panel in the sun while making breakfast, allowing it to catch some rays. But the panel had to be getting direct sunlight in order to produce significant power.

Goal Zero claims it takes 10-20 hours to fully charge the Sherpa in ideal conditions; we never had that long of a period with uninterrupted sun, and thus we were never able to charge the battery to its fullest.

To the brand’s credit, Goal Zero does recommend solar charging with two Nomad panels, but the extra panel will run you another $200. 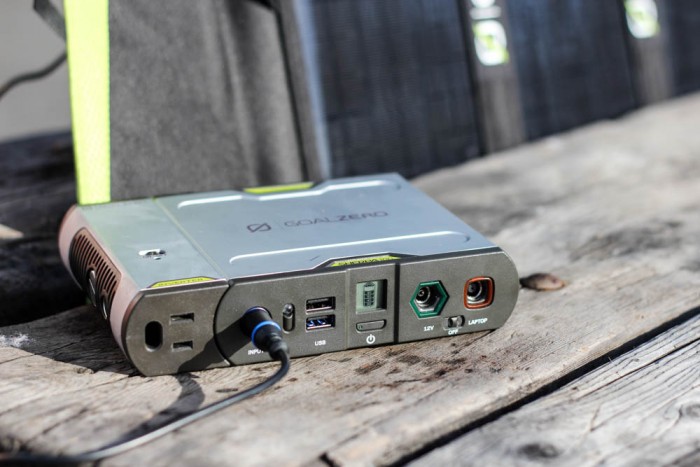 Despite its long charge time with solar, the Sherpa 100 holds a lot of power. (Note: Solar is only one recharging option; you can plug the battery into any wall outlet along your trip for a much faster recharge.)

The Sherpa kept up for about two hours before going dead. During that time, we were able to charge the laptop and iPhone to nearly full, which is pretty good compared to some of the other power packs we’ve tested.

The Sherpa has an onboard system that manages battery life as it gets low. As we dove below 20% capacity, the Sherpa charged our Macbook and gadgets less and diverted more energy to the lower output devices like the lights. It also kept the lights running at full lumens until the very end without dimming them.

The laptop port isn’t compatible with Mac laptops (nothing ever is), so I had to run my Macbook through the detachable AC converter. That worked perfect, but it wassn’t quite as energy efficient as the direct port.

We’ve tested a lot of solar kits, and this Goal Zero setup proved to be among the easiest to use and most versatile we’ve reviewed. The $600 price tag is high, but that is what comes with a trusted brand like Goal Zero. Indeed, you can find cheaper packs on the market, but we’ve yet to test anything that matches the Sherpa’s versatility.

If you’re looking for off-grid power and don’t mind throwing down a chunk of change, the Sherpa 100 Solar kit delivers reliable electric power as promised.

Up Next: Back To Basics: Making A Rug From Tree Bark