With sport climbing making its Olympic debut this summer (now 2021) in Tokyo, a few brands produced specific gear to give their sponsored athletes every conceivable advantage.

Of course, there’s some marketing in effect here. But these products are or will be available to the public, making these innovations a win-win-win. 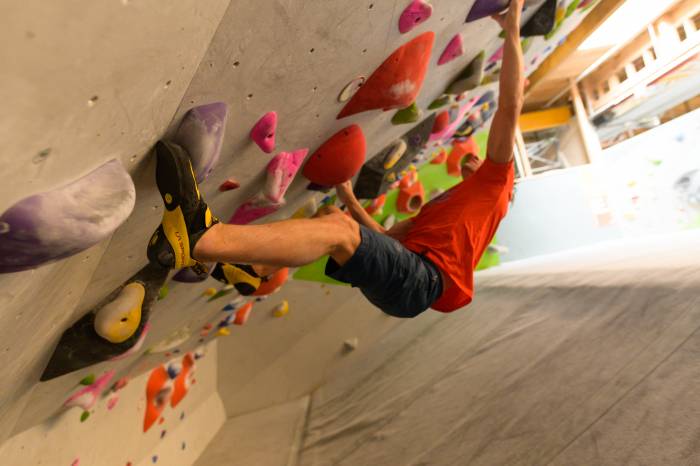 Modern competition climbing places wild demands on athletes and shoes. The flat surfaces of volumes, parkour-inspired movement, and the demands of very steep and horizontal climbing can overwhelm the abilities of shoes designed for natural stone.

During the 2019 Outdoor Retailer Summer Market, a handful of rock shoe brands stated they were making special efforts to help their athletes reach and compete at the Tokyo Olympics. I was able to put my hands on most of the shoes during the recent winter show. They indeed exist!

And they showcase features and technologies aimed at the unique challenges of elite indoor competition climbing. 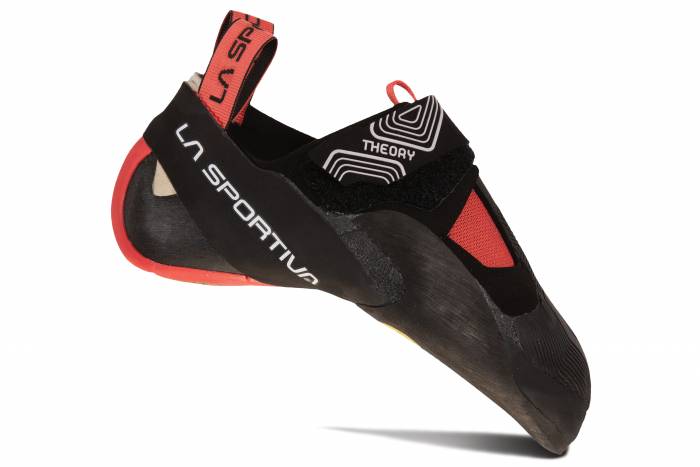 Powerful, gymnastic, and crowd-pleasing displays of athleticism, dexterity, and creativity in movement make indoor bouldering exciting to watch for the general public. The discipline also has the lowest barriers to entry for new participants. Thus, it’s the most likely avenue for spectators to become new climbers.

La Sportiva designed the Theory to address indoor bouldering-specific demands. The brand’s No-Edge technology eschews the standard flat outsole and separate rand at the big toe in exchange for a homogenous and more rounded Vibram XS Grip2 (tapers from 3.5 mm to 2 mm) contact patch. This places the foot closer to the climbing surface.

The lack of the traditional distinctive edge keeps the pressure placed on the feature consistent as the climber transitions from using the bottom of the outsole to the side of the shoe or vice versa. These movements are frequent on modern competition boulder problems, which feature jumping off volumes, toe-hooking, and pinching features with both feet.

To address super-steep and horizontal climbing, La Sportiva swathed 90% of the toe surface in rubber to ensure effective toe-hooking. It also reduced the heel profile to enhance heel-hooking and used a figure-8 slingshot rand to force the foot into the front of the shoe for power. The claimed weight is 7.5 ounces per shoe in a size 38.

The La Sportiva Theory will be available in April for an MSRP of $190 in both men’s and women’s versions. 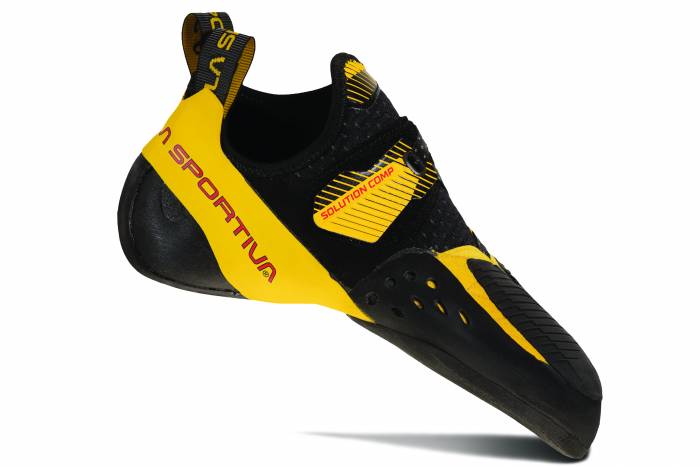 The Solution has been wildly popular shoe since its release in 2006. Rather than mess with best-selling success, La Sportiva tweaked the shoe to enhance performance on artificial features.

The Solution Comp sports a softer midsole for greater sensitivity and quicker break-in. The toe cap covers more of the upper to address the toe-hooking challenges of competition routes. Finally, a slimmer and more traditionally designed heel enhances heel-hooking on smaller holds.

This shoe retains the 3.5 mm Vibram XS Grip2 outsole, P3 Power Platform, and the Fast Lacing System that contribute to the popularity of the Solution.

Claimed weight is 8.4 ounces per shoe in a men’s size 38 and will be on sale in March for $185. The Solution Comp will be available in both men’s and women’s models. 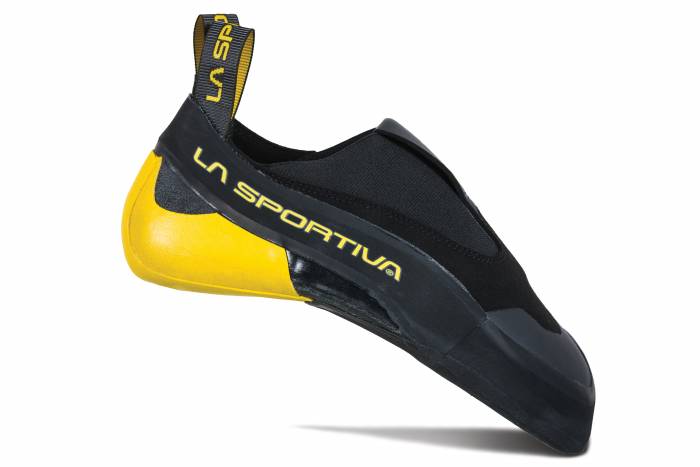 In what has to be one of the most specific climbing products ever, La Sportiva designed a shoe for speed climbing. It’s a very specific sport that contributes to the scoring for sport climbing in the upcoming Olympics.

Speed climbing is a sprint against gravity, so weight is a primary factor. La Sportiva claims the Cobra 4:99 tips the scales at 5.6 ounces per shoe in size 38, over 3.5 ounces lighter than a pair of the original Cobra slippers. An unstructured heel and toe-only midsole contribute to the loss of weight.

Additionally, the forefoot upper has a heat-sealed TPU coating to prevent snags that could hinder upward speed. 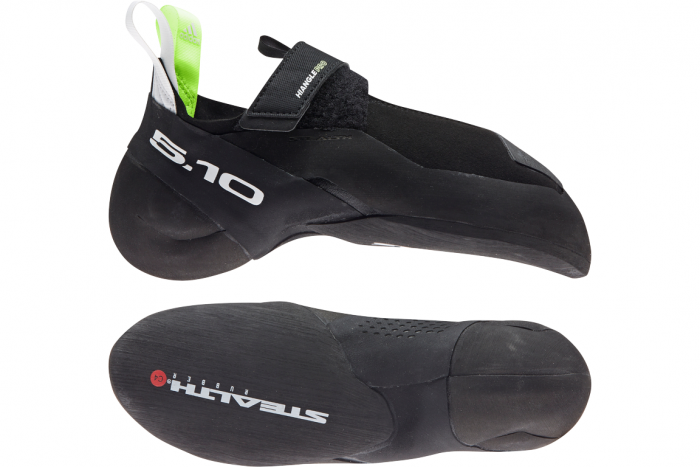 Five Ten reached out to Slovenian World Cup champion Domen Skofic to help design the Hiangle Pro. Its goal was to address parkour-style movement, compression, large sloper and volume features, and other challenges that make competition climbing exciting for both athlete and spectator.

The prominent feature of the Hiangle Pro is a 3D-molded Stealth C4 rubber outsole. It wraps around the inside edge of the forefoot, tapering from 3.5 mm to 2.1 mm thick. Similar to the La Sportiva No-Edge concept, this allows the foot to remain closer to microscopic features with more consistent pressure and contact.

But the main advantage is for climbers transitioning pressure from the bottom of the shoe to the inside surface. This often occurs when dynamically moving from the surfaces of volumes or large slopers.

Five Ten studied these moves and found that the traditional edge of the outsole and the corresponding break in the contact patch was the point of failure. The same occurs when reversing the transition. It’s a common foot maneuver when switching from a toe-hook or foot pinching to loading the feature for upward movement.

Five Ten incorporates the same ideology in the heel of the Hiangle Pro, which presents a consistent surface to roll from a heel-hook to more vertical loading or the reverse.

There is a minimalist fishhook midsole for downturn at the toes. But otherwise, the Hiangle Pro is built to be the brand’s most sensitive shoe.

Five Ten also engineered 17 separate panels of the microfiber upper for a second-skin fit. There, it chose a specific material to mimic the comfort and breathability of leather and to provide just enough stretch for the toe knuckles when fitted appropriately for high-end performance.

Five Ten will release the Hiangle Pro competition shoe in both men’s and women’s versions in Europe and Japan in time for the summer Olympics. It launches in the United States in the fall of 2020. The brand has yet to determine pricing. 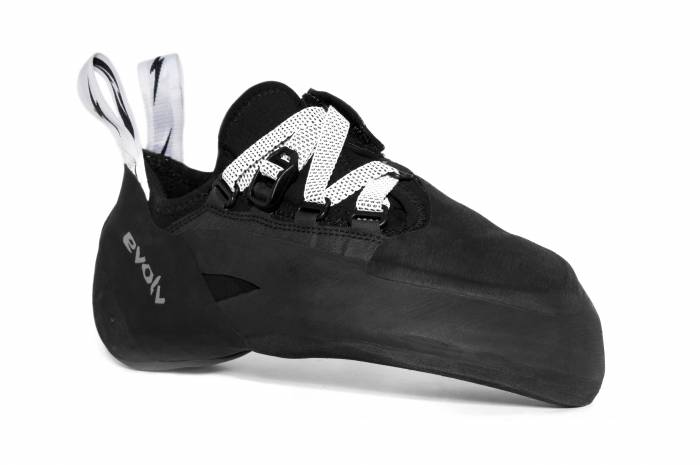 Evolv tapped Daniel Woods and Paul Robinson to provide valuable input in creating the brand’s most advanced rock shoe to date. It combined several technologies in the Phantom to yield a powerful and sensitive shoe for Olympic use and beyond.

Evolv has released limited information at this time, but it has confirmed some holdover features. A 4mm TRAX SAS rubber outsole provides grip. A variable-thickness rand (VTR) puts more rubber in high-wear zones and less rubber in other areas to reduce pressure points.

The upper is a vegan-friendly Synthratek VX synthetic, and the Phantom is unlined. There is a molded rubber toe cap, and the heel incorporates Dark Spine S, a protective midsole that also aids in hooking. 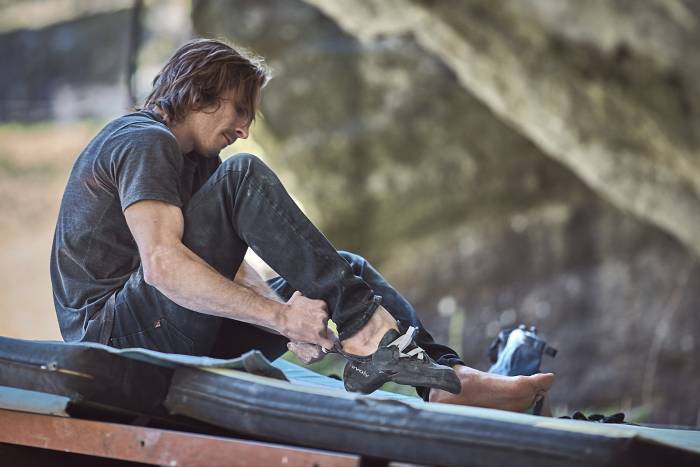 Newer technologies include a midsole that tapers from 1 to 2 mm thick, dubbed the Abridged Variable Thickness midsole, and a Tension Power System rubber midsole that maintains the forefoot downturn. The upper in the heel area is said to have a Neoflex technology that provides a compression fit. A visibly obvious new feature is the Compression Closure System, a six-point, single-pull closure method.

The Evolv Phantom is available now for $185 in a men’s version.

All these new or soon-to-be-released products will grace sponsored athletes in Tokyo. They serve the double purpose of giving every possible advantage to both competitors and the brands’ marketing efforts. “Win on Sunday, sell on Monday” is a proven formula in the sporting goods world, and the climbing market will surely follow suit.

Up Next: 8-Hour Plank? Here’s How to Improve Yours