Both epic and succinct, with spectacular scenery and relatable thoughts on the risks climbers take, Meru will appeal to both hard-core climbers and flat-landers alike. 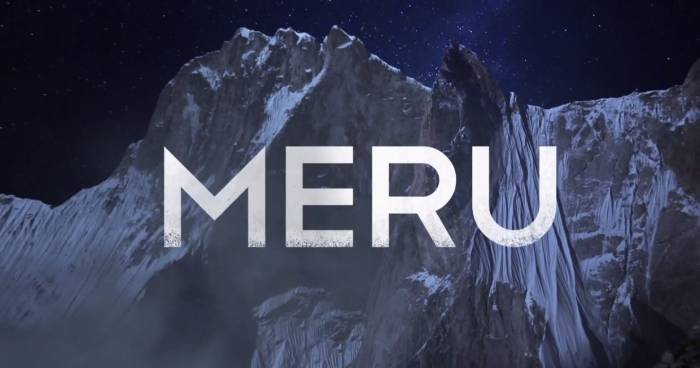 Shortly after the 1996 Everest disaster chronicled by Into Thin Air, my dad, having read the book and seen the IMAX film shot simultaneously, posited this:

“I can’t imagine having a hobby,” he said, “where I might wind up talking to my family on a satellite phone while I’m freezing to death, knowing I’ll never see them again.”

He was right, of course – climbing is irrational, almost absurd. The risk high alpine and big-wall pioneers take for immaterial rewards makes no sense on paper. And even at age 10 or 11 – which I was in the late ’90s – I got that.

But I didn’t feel like my dad was giving it a fair shake. I hadn’t spent any time up a wall at that point, but I understood the appeal – the thrill of topping out, of growing stronger, of conquering something big. 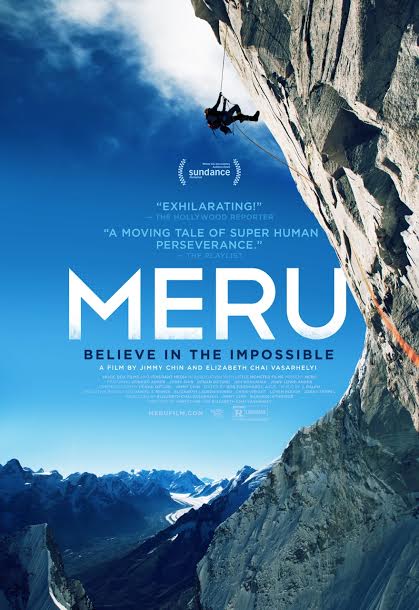 Meru is a film that speaks to people like me, who understand the aesthetic and spiritual rewards inherent in a big climb (or run, or paddle); it appeals even to hard-core climbers who are familiar with the challenge of this particular route and who get jacked over an almost-impossible first ascent; but it’s a rare climbing – neigh, outdoors – film that can speak to both that audience and people like my dad. It’s easily one of the best climbing films I have ever seen, and yet it is compulsively watchable for even non-climbers.

Meru chronicles the 2011 first ascent of the Shark Fin, a 1,500-foot granite blade that sits atop the jagged, multi-peaked mountain after which the film is named. For Hindus, the Himalayan peak represents the center of the universe, and that might also apply to Conrad Anker, the expedition’s ringleader.

It’s his 20-year goal, the potential cap on his remarkable climbing career, and it poses huge challenge and risk for even the most skillful alpinists.

As Into Thin Air’s author Jon Krakauer – who provides a bridge between the technical know-how of the expedition and non-climbers in the audience throughout the film – the Shark Fin is a sheer face that could require upwards of a week to climb.

This means climbers have to haul sufficient gear – around 200 pounds – up to its face, near 20,000 feet, and then they need to complete a dauntingly technical big-wall climb at that altitude.

It has purportedly seen more failed attempts than any other Himalayan Peak, according to the film.

One of those failures was that of Anker, along with Jimmy Chin and Renan Ozturk, who in 2008 made it within 100 yards of the peak before Ozturk’s health and a miscalculation (they would have had to set up an emergency bivy over 20,000 feet overnight to make the final push) forced them to turn around.

While Chin swears never to return, it quickly becomes clear that another attempt is not only likely – it’s a given.

That is one of the themes that will resonate beyond the climbing community, and one of the reasons Meru will do well on screens beyond the Banff and Sundance film festivals to which outdoors documentaries are typically contained.

Insatiable passion, and the siren song of an elusive signature accomplishment, is something we all know, or have known, if we are living right. Add an air of impossibility and ultimate challenge to that goal, as well as a “comeback,” and you have a Rocky movie.

Not everyone wants to climb the Shark Fin, but we see Anker, Chin and Ozturk are driven by the same forces that motivate each of us to do whatever it is we’re working toward.

The second – and more tangible – reason this film will appeal broadly is its acknowledgement of the absurdity and risk, identified by my dad, as a reason to avoid climbing altogether. The climbers have families and friends, which is a source of worry as they attempt a climb that may, as Krakauer says, require they move beyond “acceptable risk” into territory with no margin of error to complete.

“The rewards of climbing are huge,” Krakauer says. “The problem is, you don’t always come out of it okay… people die, and then you can’t justify it.”

Meru is a serious meditation on the irrationality, even selfishness, of risking death or debilitating injury for a summit.

We see Ozturk and Chin survive, within days of each other, major scares in the mountains only months before the 2011 expedition; Ozturk requires extensive rehab and is the only person – soon to be joined by Anker and Chin – who thinks he can join the second attempt in his condition because, simply put, there is no alternative for him.

Chin, deeply shaken by his own brush with death, initially cancels all of his plans; but as time wears on “the thought of not climbing,” he says, “becomes too much to bear.”

“Why do I do this?” Krakauer speaks for alpinists, and athletes, everywhere. “Because you have to. Or you’ll go fucking crazy.”

Climbing, for all the gear and planning, is a simple act. And that’s as simple an explanation for why we do it as there is. Meru captures it in a simultaneously epic and succinct fashion. You don’t want to miss this one.

–For more information, trailers, and showtimes near you, visit merufilm.com.

Up Next: Book Review: ‘Snowblind,’ Stories Of Alpine Obsession