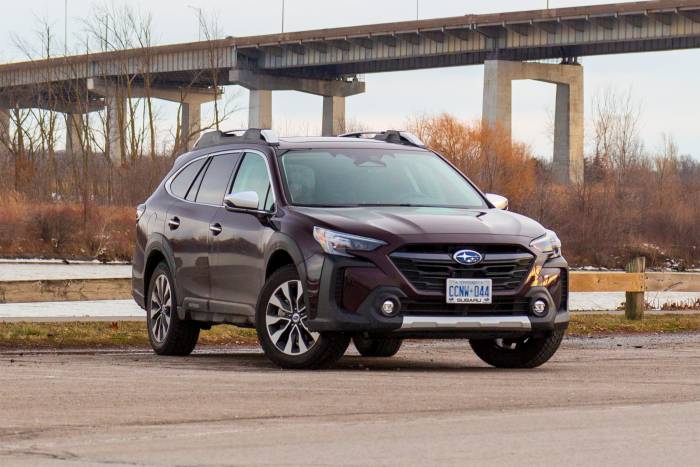 The 2023 Subaru Outback Touring XT gets some tech updates that improve the package. But there is still room for improvement in this popular tall wagon.

I’m at Toronto’s Pearson Airport, stepping off what was supposed to be an early Christmas Eve flight that is now arriving well into Christmas morning. I’m more than six hours delayed because of the blizzard that has blanketed much of North America in massive amounts of snow and cold.

Where I’m headed, a couple of hours away in Niagara Falls, major highways are still closed due to drifts so deep they’re hiding stranded vehicles. Am I tired? Yes. Am I worried? No. Because I’m about to snag the keys to a 2023 Subaru Outback shod with a set of Bridgestone Blizzaks. A nearly unstoppable combination.

In short: The 2023 Subaru Outback is the bad-weather grand tourer, especially in turbo 2.4L XT form. This is a vehicle that can cover huge driving distances quickly and in great comfort, even if the roads are snow-covered and miserable. And it can do it with a week’s worth of luggage plus gifts in the back.

For 2023, Subaru has given the Outback a mid-cycle refresh. For the most part, that means a host of small improvements. The remaining part is the new front fascia and the oddball center-ish fog lamps. At least the Wilderness trim keeps its old nose instead of the unusual new look.

After a 20-minute cab ride to the review fleet parking lot in an industrial park near the airport, I’m finally getting into the car at 1:36 a.m. Moments after pressing the start button, I noticed Subaru had fixed one of last year’s glaring issues with the 11.6-inch multimedia system. No, not the oversized (and low-res-looking) fonts. (If you had the big screen, you got tiny Android Auto. CarPlay had been embiggened already.) Now you get a much larger implementation that takes up all but the climate control area.

Both CarPlay and Auto can use a wireless connection now too. The big screen made a big difference in helping me navigate an unfamiliar airport and city in a blizzard. I spent more time watching the road and less time looking at a smaller map.

What I didn’t appreciate deep into that frigid morning was that Subaru puts the heated (and vented) seat controls on the touchscreen. Automotive screens often feel slow to respond when temperatures are below freezing, and Subaru’s screen can be slow even on a warm day. Stabbing at the buttons with gloves on accomplished nothing but frustration.

The heated wheel is run by a paddle behind the wheel’s rim, showing that Subaru understands some physical controls are better. Bring back the old seat heater toggles, please.

At least once you get those seat heaters fired up, they really pump out the BTUs. In five minutes, I had the dial set back to a single bar (of three), and that was more than enough for the rest of my time in the car.

The XT in Touring XT refers to Subaru’s 2.4L boxer-four. Subaru has offered this turbocharged engine in the Outback since this generation launched. It’s a big power boost over the naturally aspirated 2.5L boxer engine offered in anything without that XT badge.

The engine offers 260 horsepower and 277 pound-feet of torque. That’s plenty to move this big wagon around on the highway. Or to keep the wheels spinning when you’re trying to get through a particularly large snow drift. The engine has enough power that I’m not sure I used full throttle more than once or twice.

Though it’s nearly the same engine as the WRX, it doesn’t make this a sports car. But even on the multi-lane monster highways of Southern Ontario, half-throttle was more than enough.

My first few hours in the 2023 Outback Touring XT showed a miserable 17 miles per gallon, at least according to the onboard computer. The number quickly began to climb after that first day, though, and my week’s average ended up much closer to 25 miles per gallon. That’s with a mix of extensive stop-and-go tourists looking at Christmas lights and high-speed highways with little in between.

The official estimates are 22 city and 29 highway. That’s enough of a difference to make the 2.5L engine and its 26/32 rating an appealing choice.

Behind the turbo-four is a continuously variable transmission (CVT). Subaru was one of the first to adopt the CVT, and it has learned plenty since it first launched in 1989. One of the main innovations it uses in its chain-driven boxes is a torque converter.

Using the same fluid coupling as a conventional automatic, the torque converter can slip and lock up as the computer deems fit. This eliminates the rubber-band effect CVTs suffer from when pulling away from a stop. Subaru has also tuned the system to avoid the drone of wide throttle openings and constant RPMs.

While I’m not always a fan of the CVT, this is a good one.

Fast-Acting AWD in the 2023 Subaru Outback

Subaru’s all-wheel-drive (AWD) system is active all the time. You don’t need to worry about turning it on or waiting for a tire to slip before it starts sending power to other tires. It’s not un-stickable, as I found out on wet leaves with street tires last fall, but it is remarkably capable.

Instead of multiple terrain modes for you to pick from when you’re worried about getting stuck, there is only one.

Called X-Mode, the slippery drive setting can be engaged below 25 miles per hour. When engaged, the system softens the throttle to help prevent wheelspin. It also tightens up the center differential, shifting power front or rear more quickly.

New this year, once engaged, the system will turn itself back on when your speed drops below 25 mph again. That’s handy on roads where the intersections are particularly slick. The Wilderness trim offers a dual-mode X-Mode system that is better suited to more aggressive off-roading.

Subaru has tweaked its EyeSight driver assistance suite this year too. On all trims, the system has improved software and a wider-seeing camera, plus a new brake booster. The first two let it work in more conditions and better spot upcoming problems. The third change makes vehicle braking feel smoother. In both, the constant barrage of confusing safety warning beeps has been reduced to a level more like other cars.

The touring trim I tested has an extra wide-angle camera that expands the system’s vision even more. This lets it recognize pedestrians and cyclists sooner. Because Subaru locates the sensors behind the window glass and not in the grille, they’re quickly cleaned by the wipers.

So even on my snowy and miserable drive days (with an iced-over grille), all of the safety systems were active. Northerners will appreciate this, even if drivers south of the salt belt won’t notice the difference.

My favorite of all Subaru safety systems, though, is DriverFocus distraction mitigation. The system watches your eyes to make sure they’re on the road. Even with polarized sunglasses, it let me know if I was spending too much time looking at the sights and not enough time looking at the pavement.

You can argue over the Outback’s status as a station wagon or a crossover for days. I could easily spend a few thousand words on the subject if my editors allowed it.

Whatever your stance, this long roof has loads of cargo space. There is 32.6 cubic feet behind the rear seats, to be precise. Plenty for a week of travel or that next camping trip. Fold the seats in the 2023 Subaru Outback, and there is 75.6 cubic feet of space for your gear.

Subaru is unique in that the company gives you cargo length specifications, too. So, it has 42 inches of length seats up and 75 seats down. No room for a 4×8 sheet of plywood, but with a tailgate opening of 45.2 inches, it’s not far off either.

Turbo models can tow 3,500 pounds, and NA engines can bring along 2,700 pounds of trailer and cargo — both good numbers for the segment.

The large cargo hold is part of a large cabin. Plenty of room for four adults. The driver seat will adjust way down for tall drivers and (as I discovered getting in) way up for shorter ones.

An adjustable thigh bolster helps accommodate a wider range of drivers as well. Plus, if you have DriverFocus, the Outback scans you and will remember (and return to) your seat position, mirror settings, and some other handy stuff. Pretty cool.

Subaru uses Outback’s 8.7 inches of ground clearance (9.5 in the Wilderness) by giving it a long-travel suspension. With plenty of movement up and down, Subaru can use slightly softer springs and dampers than would otherwise be needed. It gives you the sensation (and reality) of more body roll but a much more compliant ride over potholes, bumps, and other road obstacles.

Unless you want a sports car with cargo space, the Outback Touring XT is a great tradeoff in everyday driving.

The 2023 Subaru Outback starts with the $28,395 base model. With that, you get the 182 horsepower 2.5L four, EyeSight driver assistance, LED steering-responsive headlights, fog lights, and roof rack bars. That’s a lot of vehicle for the money. Sticking with the lower-power engine, the Outback is also available in Premium, Onyx Edition, and Touring. So you can get all of the luxury features without the more powerful engine.

XT turbo trims include Onyx Edition, Limited, Touring, and the off-road focused Wilderness ($38,445), including a more mud-friendly interior and stronger roof rack. Entry into the turbocharged engine starts with that Wilderness model and rises to $42,295 (plus destination shipping) for a loaded Touring XT with Nappa leather, heated and vented seats, and the DriverFocus system.

I’ll admit I’ve long been partial to the Subaru Outback because I like what it offers: a soft ride, plenty of tech, and better handling, acceleration, and fuel economy than more conventional crossovers of similar size.

For 2023, Subaru has improved the package. Tired, cold, travel-worn me appreciated it. But I would appreciate it even more if the infotainment system was more responsive. And had more modern-looking graphics. 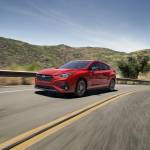 2024 Subaru Impreza: Can the Return of the RS Revive Sales?

The 2024 Subaru Impreza is getting loaded with tech, will only be offered as a hatchback, and won't have a third pedal. Can it revive declining sales? Read more…