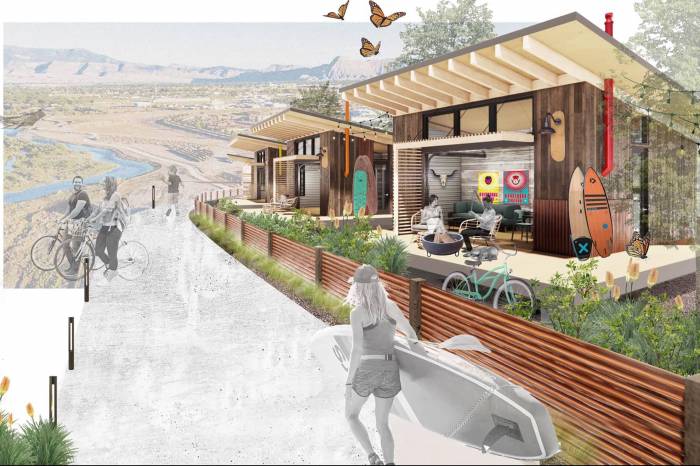 Grand Junction, Colorado, entrepreneur Jen Taylor is over it. In the eyes of the longtime local and outdoor advocate, the camping scene for full-time travelers has devolved into jam-packed RV lots and overcrowded parks.

But instead of sitting around and lamenting the dearth of alternative experiences, she’s creating a novel space for camping in her hometown. Now live on Kickstarter, El Jet’s Cantina + Sky Outpost is something between a woo-woo millennial’s coworking fantasy world and a wizened desert person’s mystically inspired hideout. Hell, even the renderings are boutique.

Clearly excited, Taylor explains in the teaser video the problem with traditional camping spaces — and where El Jet’s fills the void.

If successful, the glamping cantina’s Kickstarter campaign will help the venture secure 10 vintage Airstream trailers to turn into “dreamy vacation pods.” With 8 days to go, the all-or-nothing campaign was $5,000 short of its $25K goal.

At our first look, the rootsy project appears to talk the talk. Can it walk the walk?

The 4.2-acre property that will become El Jet’s Cantina + Sky Outpost sits at the confluence of the Gunnison and the Colorado Rivers, just west of downtown Grand Junction.

The location has deep indigenous and historical significance (which Taylor outlines in the Kickstarter video), but for years, it was a dump — literally. In the late ’80s, the city removed 8,500 junked cars from the site.

Its revitalization is well-warranted. To say it’s surrounded by trails and recreation resources is an understatement. Kickstarter lists the location details (no changes made):

Organizers call it a “purpose-driven urban outdoor recreation hospitality resort.” According to the Kickstarter listing, the indoor/outdoor restaurant and performance venue will serve up “the best damn margaritas, cold beers, and fish tacos” in the area. And Sky Outpost is billed as the “first and only glamping/lodging/camping outpost destination on the river.” That’s where the Airstreams come in.

For the nomad/glamper type, a plush Airstream is a big draw — the living out of anachronistic fantasies, the modular interior design. The glinting, riveted aircraft skin.

Taylor connects the dots adroitly and sets aside $400K to secure and renovate 10 silver bullets for the property. Each custom build will sleep two to four or more. French doors open onto a shady deck and the requisite epic view.

Inside, find plenty of soft places to sit and sleep, heat and A/C, a library lounge, and a coffee/laptop station. You know, for work.

There’s way too much to say about El Jet’s Cantina + Sky Outpost without going into anaphylactic nomad-hipster shock. The outdoor stage is a 1964 Ford cab-over truck named Henry.

The permanent food truck is a 1970s tour bus named Large Marge. Not every inanimate object has a name, but the in-house booze does: El Jet’s lager will be on tap, and El Jet’s tequila will flow freely.

I could go on. But for the good of everyone involved, it’s probably better to see it for yourself.

Check out El Jet’s Cantina + Sky Outpost Kickstarter page (there’s just five days left for you to get in early on the action). Or, follow the glamping cantina on Facebook to learn more. Take a look at the additional project development details, including the below footage.

And if you’re in the area, stop by after the doors open in April 2022. It’s bound to be a whole vibe.