With trails like these, something always goes wrong. Luckily, the Stringbean pushed through an ankle injury and miles of snow to complete the Arizona Trail in record time.

A Columbia Montrail athlete, Stringbean, 29, has set multiple records, including the AT, PCT, and, most recently, Vermont’s Long Trail. He hails from the Pacific Northwest and (when he’s not running) works as a coach.

He completed the Arizona Trail (AZT) FKT supported, meaning he had a crew following him, setting up camp, and providing meals and morale boosts. Still, 788 miles in 13 days is no small feat — there was a lot of stretching, sore muscles, a swollen ankle, and not much sleep. 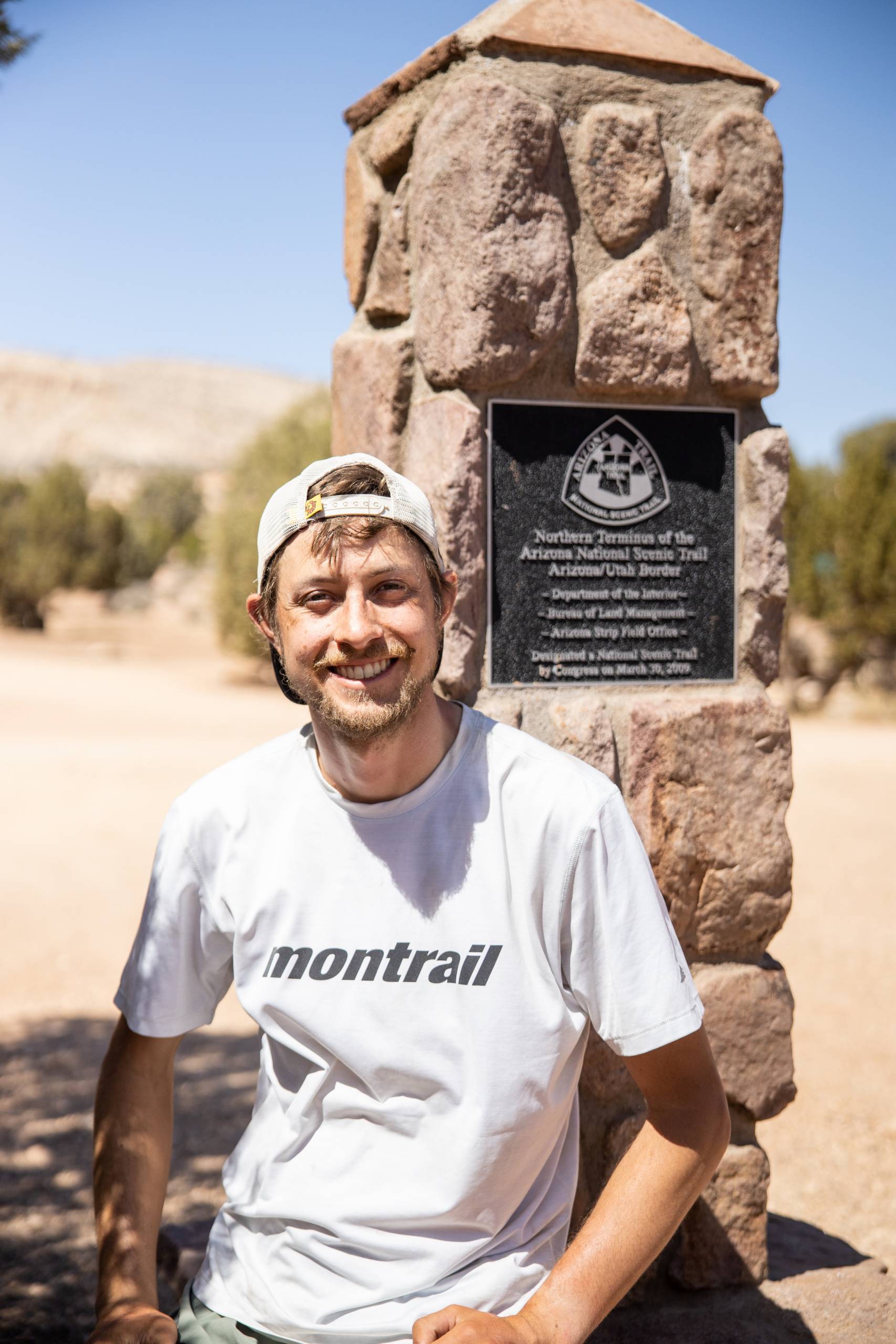 We caught up with the Stringbean himself on the heels of this attempt (and after some well-deserved R&R) to hear all about this scorching hike.

GearJunkie: Why did you decide to run the AZT?

Stringbean: It’s an incredibly beautiful trail I’ve had on the radar for a while. My wife, Katie, and I are thinking about moving to Flagstaff, so we wanted to do the trail. Eight hundred miles is also a great middle-length trail; it’s nothing like the PCT.

With the AZT, you are riding that line of killing yourself and pushing yourself but also realizing you need to sustain that for 8 more days.

Many folks think ‘desert’ when they hear ‘Arizona,’ but what was the terrain actually like?

So there’s the Sonoran desert, the Grand Canyon. All of a sudden, you are running down a mountain, then running through a desert — and 30 minutes before, I was in snow with this beautiful stream and pines towering over me. It’s the most diverse landscape.

It’s also not as rugged as East Coast trails. It’s very hilly and graded well, so very runnable. And there are definitely big mountains. There are a few 5,000- to 6,000-foot climbs, and that includes the southern section. The majority of the elevation actually came in there.

In the northern section, it’s the opposite. It’s a lot flatter because there’s lots of plateaus, but at a high base elevation. The AZT really packs a punch; you get all types of environments along the way.

What were your biggest day and longest stretch without water?

Without water, I had a few 25- to 26-mile stretches. Then there were sections of like 35 miles without aid. My longest day was 78 miles — it was supposed to be 76, but I took a mile detour and had to double back. Bonus miles, haha.

Did you ever consider giving up?

The Kaibab plateau is usually the place with the biggest issue for snow. When we hit that North Rim, we had about 50 miles to go, and it looked like all the snow had cleared up. And then I immediately post-holed like 2 feet — we did about 7 miles in 5 hours, in hip-deep snow.

The worst part was that highway 67 runs parallel to the trail. It’s completely, perfectly plowed. But it’s closed until May. With all the snow, we were feeling really unsafe, really unprepared for if we needed to spend a night. So we got over on the road, hiked up to the North Rim entrance station, and our crew found a way to meet us.

I gave up, I felt done. We got a hotel room and got some sleep. It just seemed insurmountable that I could finish. Obviously, my crew talked me into continuing. They helped me break through the snow and trail.

What motivates you at those low points?

The mental trick I focus on is really living in the moment. A friend of mine who is a mental strength coach explains it like this: a lot of people grasp towards positive feelings, push away from the negative, and ignore neutral feelings. But great athletes can acknowledge those neutral feelings — just focus on that.

I spent a lot of my time thinking about how my body was feeling — what’s my pace, how am I doing? It’s not really motivation but more of a mental focus. That’s gonna get me the farthest in the fastest time.

Favorite section of the trail?

There are two that stand out. Mt. Lemmon has eight different biomes that you cross. You start out at a desert floor, then end at an alpine forest, and you hit everything in between. It’s such a beautiful mountain and view.

The other one was the Tortilla Mountains, a range south of the Gila River. Nothing crazy, but this beautiful ridgeline with rolling mountaintops. It was a full moon at the end of my 78-mile day, and everything was just lit up by moonlight.

How many other people did you see on the trail?

Quite a lot. Witt, who was running with me, has done the AZT three times, and he noticed that the trail has really blown up. I probably saw 300-400 thru-hikers along the way.

How did the AZT compare to your previous FKTs?

I’d say I’m at the best fitness I’ve been on a trail. With the PCT, and to some extent the AT, I was still figuring stuff out, how to be stronger as an athlete for these types of attempts.

I did two 18-hour sections back-to-back — 66 miles, then a 78-mile day, each with a lot of vert. That’s something I never would’ve considered doing on the PCT/AT.

Do you have any tips for tackling an FKT like this?

You want to be inspired, but on the flip side, it’s not something you wake up and do. You need strength, to train, to push [yourself] to [the] limits. I put on my shoes every morning for 2-3 hours to log miles.

And something I’ve gotten better at is understanding preparation. I asked Columbia for a lot of winter gear. There was rain on Day One, wind and hail on Day Two, snow on Day Three. But it’s good I prepared for that. It’s crucial.

I had arm sleeves, which were probably the best piece of desert gear. I wore them for like 11 days. 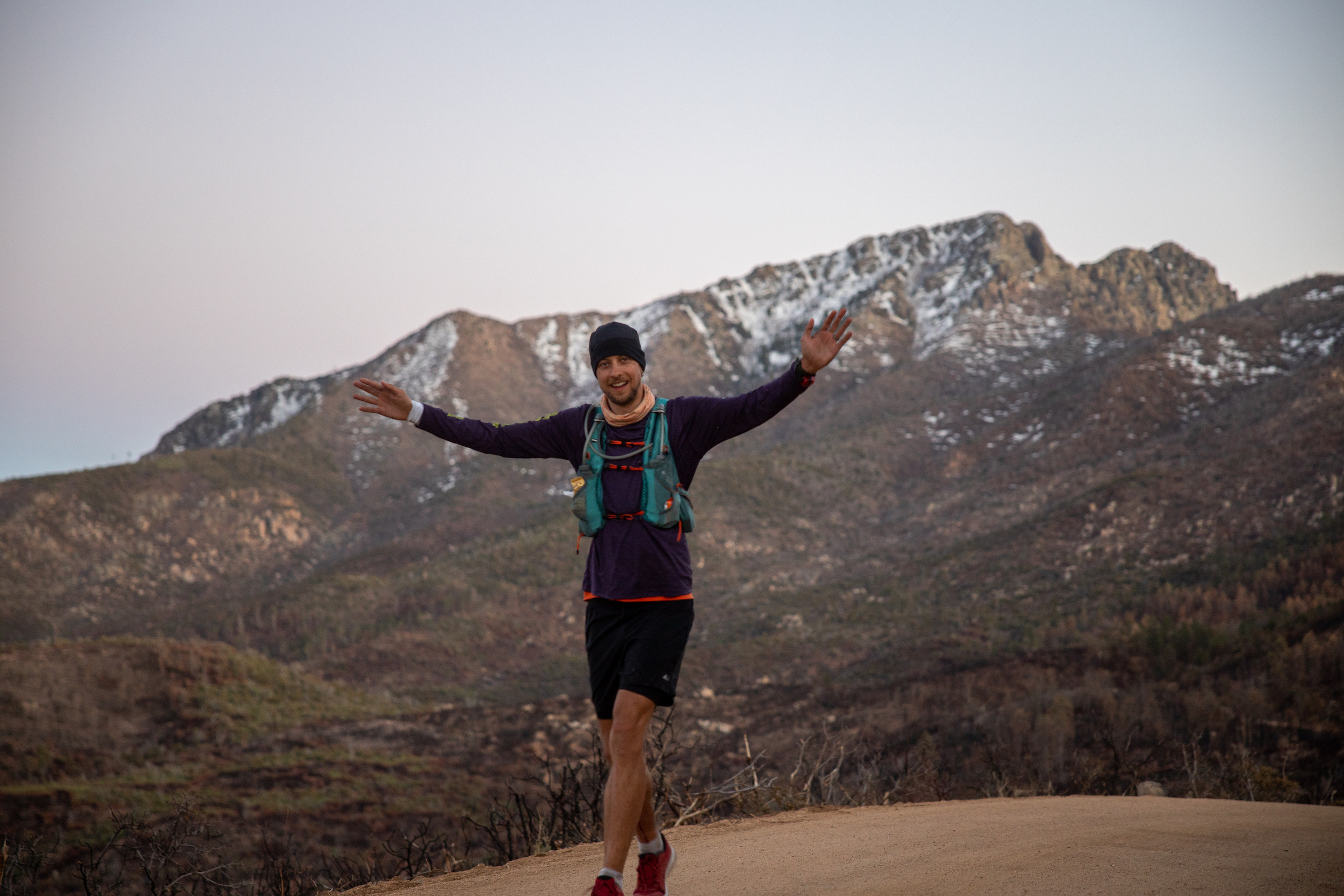 What shoes did you run in?

The mountains were pretty rugged, so I used the Trans Alps, which are sturdier and more protected when it’s rocky. Better for elevation and steep mountain passes.

The Columbia F.K.T.s (aptly named) were like my pace shoes. They felt good to move in on the flatter sections. My form kind of went downhill around Day Four … I had a hamstring issue, Achilles issue, I was kicking a lot of rocks, so I transitioned back to the Trans Alps. And toe socks, yes.

You actually had your crew film a vlog of your experience, and I hear you are also doing a documentary?

Jack and Dills, who were both on the PCT with me, actually filmed it. And we thought it’d be really cool to do a documentary around this FKT. (Pilot Field is the producer.) We are looking to release it in late summer.

You can watch their final vlog episode (and all the others) of Stringbean’s FKT journey here.

A runner just set a new record on Vermont's Long Trail. And he's using the FKT as a positive force for the greater hiking community. Read more…

Up Next: Fastpacking Giveaway: Enter to Win Gear and Pro Coaching for Fast-and-Light Adventures