Folding knives are popular, easy-to-carry tools made in many styles and prices. In this installment of ‘Blade Boot Camp’ we explain characteristics to consider when choosing a folding knife. 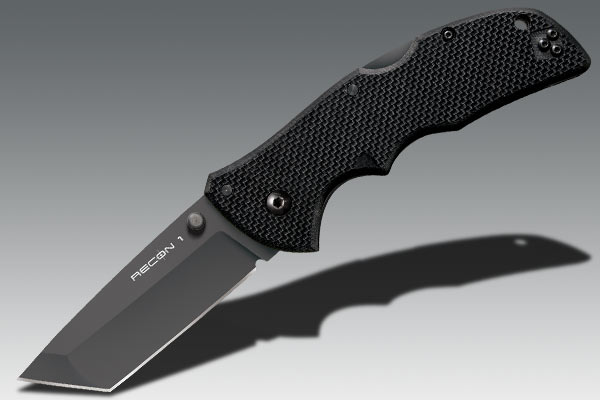 In many ways folding knives are to fixed blades what the Cadillac Escalade is to a Land Rover — they are the urbanized, convenience-first version of the rugged original. And as with automobiles, there is a huge price range and many options.

But this is a time of unprecedented expansion, development, and competition in the knife market. As a result we are treated to truly great knives at any price range. Maximizing your dollar is a matter of knowing what to look for when buying a knife. There are four major decisions, so let’s walk through them one at a time.

I touched on this before in the general overview, but this dichotomy comes up more in the folding knife market than it does in the fixed-blade market.

From a utility perspective, this seems like a no-brainer. Modern knives are the essence of convenience, with locks, one-handed opening, and pocket clips.

But it’s not that simple. A good traditional folder offers time tested materials and superb cutting action, even on very inexpensive models. They tend to be heavier for their size, but you can do quite well with nothing more than a W.R. Case or a Queen knife in your pocket. One huge side benefit–their looks are embedded in our ancestral memory to the point that opening one in public isn’t likely to send folks scrambling away.

If you don’t want a traditional knife, keep going. If this is where you get off the train, take a look at Case, Great Eastern Cutlery, Northwoods Knives, AG Russell or Canal Street Cutlery.

Some of my favorite traditional knives are the Case Swayback Jack, the GEC Tom’s Choice Barlow, and Northwoods Knives’ Indian River Jack. The AG Russell Medium Barlow is a great bridge between the two styles, as it runs a lock and has a cleverly designed nail nick that allows for one-handed opening.

Folding knives really come in three varieties, based on how you open them — full-auto, assist, and manual.

A full-auto is the classic switchblade of Greaser lore. An assist is a knife that has some mechanism to aid in deployment, using a tensioned bar or coiled piece of metal that snaps the blade open once you push it manually a little bit. A manual knife uses no mechanical devices to aid in opening the knife. Check your local laws for the legal status of each kind of knife.

Ironically, since the passage of the Switchblade Act in the 1950s, knife makers and companies have done so much design work to get around the law that modern knives open as fast or faster than switchblades and don’t need springs to do so. All of the extra parts associated with a non-manual knife make them a nonstarter for me. All too often they rattle, or cost more, or break, or all three. I am not a fan of the reaction these knives draw either. Save some money and piece of mind and get a manual open knife.

If you absolutely must have an auto, Kershaw makes a few entry level models. If you have a few more bucks to spend, the UDT-70 from Microtech is a nice size and won’t get you confused with a terrorist.

Decision #3: How Do I Open This Thing?

There are dozens of opening methods for folders, but let’s focus on the four major ones–the wave, the thumb stud, the thumb hole, and the flipper.

The Wave is an invention of Ernest Emerson. It is basically a hook on the spine of the knife. As you pull the knife from your pocket, the hook snags the edge of your pocket and the knife opens. Once the technique is perfected, it works flawlessly every single time. It is also blazingly fast. As I mentioned above, manuals are often faster than autos, and this is why. With an auto you have to take the knife out and push a button. Here, you just take the knife out and it is open already. The Wave is heavily favored by people using knives in a tactical situation (one was purportedly on the raid that took out Osama bin Laden), but for regular folks all that speed means very little.

The thumb stud is found on a wide variety of knives and is usually a small raised cylinder on the knife blade itself. You open the knife by putting pressure on the cylinder with your thumb. The thumb stud works, and there are a large number of varieties — angled studs, thumb plates, thumb plates that also work like wave hooks. But I dislike them for two reasons–first, they attract gunk; and, second, they require more attention than the next two ways of opening a knife — you have to maintain contact with the stud the entire opening arc (of course, there are ways to jury-rig the system, like coin flipping the knife opening using the thumb stud). You want this process to be thoughtless, and with a thumb stud, it’s not quite there, even if you coin-flip it open.

The thumb hole is exactly what it sounds like–there is a hole in the blade to allow your thumb to get some purchase and then you push the knife open. Simple, elegant, and easy to use. Spyderco makes all of its knives with a thumb hole (except for a very famous folder, the legendary Jess Horn). Other companies use holes or ovals as well. Among all of the shapes out there, the Spyderco original is my favorite — it is easy to use and requires less attention to use than a thumb stud.

The new kid on the blade is the flipper. A flipper knife opens using a small protrusion or tab. You place pressure on this tab and that pressure overcomes a small ball bearing resting in the blade itself. Once that bearing is overcome, the knife flies out of the handle and snaps open. The flipper is very fast, very easy, and a bit addictive. The one issue is that a flipper is a bit more complex to make. First, it can only be used with certain locks. Second, the detent bearing has to be machined just right or you get a lazy flipper that you have to help open.

The winners in the opening method contest are clear to me–the thumb hole and flipper are great for everyday use, and nothing beats a wave opener for quick draws. The Spyderco Dragonfly is an excellent thumb hole opener, the Kershaw Skyline is a great flipper, and the Kershaw/Emerson CQC-6K is a good, cheap wave opener.

A Word About Pivots:

Pivots have become something of a point of focus for knife makers. Smooth pivots, capable of providing lightning fast deployment, have become tremendously popular, and the trend is away from washers (teflon and bronze) to ball bearing systems (IKBS, KVT, GTC, SS … pick your acronym). In the end, I am not convinced that the bearing pivot systems are a necessity, but they are nice.

In addition to making the pivot smoother, they also make it more stable (think about the legs of a chair–the wider they are the more stable the chair). But the bearing pivots introduce complexity into a system that is designed to be robust. I have had a dozen or so bearing pivot knives and none have been a problem, but we are still waiting on long term data. The traditional washer pivots have been around forever and hold up well.

There is no part of a knife that is more the subject of bro science baloney than a lock. Crazy folks love to smash, bend, twist and break locks on purpose on video to prove…well…they think they are proving how strong a lock is, but really they are proving that they like to break things.

The simple rule for locks is this–if you need a no-fail lock, then you need a fixed blade. No matter how they are made, locks are compensating for the fact that a folder is, essentially, a broken fixed blade. And, thus, if failure is not an option, grab a fixed blade for that task.

Another issue with locks is that almost all of the basic designs out there are, if made correctly, quite good. Some are easier to use, some are stronger, but, by in large, if made and used correctly, locks won’t fail.

The key here is manufacturing. The button lock is a good example of how a good design can go bad. Button locks are very stable, simple, repeatable mechanisms, but they require a good deal of precision when made, otherwise they are prone to failure. Lots of companies use them to great results–William Henry, CRKT, AG Russell, and Freeman Outdoor Gear, to name a few, but these folks know what they’re doing.

Gerber, on the other hand, had a massive recall of its flagship knife, the Gerber Instant, because its button lock had a tendency to fail. The button lock can work, but only if made well. I don’t trust Gerber’s locks due to a bad track record in recent years.

In many ways, the manufacturer matters more than the lock design. I’d trust my fingers to just about any lock made by Spyderco, Kershaw, or Benchmade.

There are dozens, if not hundreds, of locks out there, but there are a few things to look for in lock. You want it to be easy and intuitive to use. A folding knife is at its most dangerous when it is in the process of closing — the blade is swinging, you don’t have your normal grip on the knife, and the safety features have all been turned off — so you want something that is second nature to you. Lockbacks and liner locks are good on this front.

You also want something that is stable and exhibits little blade play. The Tri-Ad Lock, AXIS lock from Benchmade, and the Compression Lock from Spyderco are good here. Finally, I like locks that don’t require you to put your finger in the blade path when closing (again the AXIS lock and Compression Lock are winners).

If you have a choice, I like the Compression Lock, the Tri-Ad Lock, and the AXIS lock in that order. Lock backs from Spyderco are also quite decent. Liner locks from Kershaw, such as the one found in the Skyline, are also good. Frame locks, the darling of the custom world, are great, too.

A Word on Lock Safeties

A few knives on the market have locks for their locks–pins that are inserted manually, such as those on Extrema Ratio Knives, or devices that impede the lock from closing, such as CRKT’s AutoLAWKS. Generally, I have found these things to be a hindrance — an unnecessary and complicating step in closing a knife. In instances where I thought a lock safety would help, I’d just rather have a fixed blade. The only lock safety that I have seen and used that didn’t make things more complicated was the Ikoma Lock Safety, as seen on the CRKT No Time Off. It was thoughtlessly easy to close, adding very little extra work to closing the knife. I am not sure how useful it is, but at least it didn’t get in the way like the other safeties did.

Up Next: Duct Tape – 25 Applications