Equal parts terror, action, and comedy, the ‘Cocaine Bear’ movie trailer is so much better than we could have expected.

Never, in my wildest dreams, would I imagine myself saying, “I really can’t wait to see that movie ‘Cocaine Bear’!” But here we are.

Purportedly “inspired by true events,” “Cocaine Bear” follows the story of a drug heist gone horribly awry. A bunch of booger sugar gets chucked out of an airplane and scatters somewhere in the Georgia wilderness.

And — on the off chance you haven’t guessed — a large black bear sniffs out the marooned blow. What ensues looks both horrific and hilarious.

Marketed as a dark comedy, the trailer offers up plenty of gore (and a fair share of chuckles), so viewer discretion advised.

What Is ‘Cocaine Bear’ About?

The (soon-to-be) hit plays off a 1985 drug run, in which Andrew Carter Thornton II — a police officer turned drug-smuggling pilot — accidentally dumped some 75 pounds of cocaine into Chattahoochee National Forest. (He also died when his parachute failed to open after jumping out of his Cessna 404.)

Needless to say, “Pablo Escobear,” as the 175-pound black bear came to be known, wandered across the cache of coke. And yes, it did consume much — or all — of it.

As for a murderous, drug-induced killing spree — that’s completely up to Hollywood’s imagination. 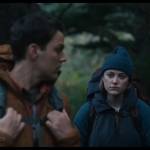 'Significant Other' Is the 'Jaws' of Hiking Horror Movies

Paramount Plus’ new film pairs the scares of the outdoors with the persistent terror within. Read more…