It’s got a dozen different names: Wind Pouch, Inflatable Hammock, Aero Lounger, even the Woo Hoo. But soon, this year’s most bizarre and imitated outdoor product could belong to one brand alone. 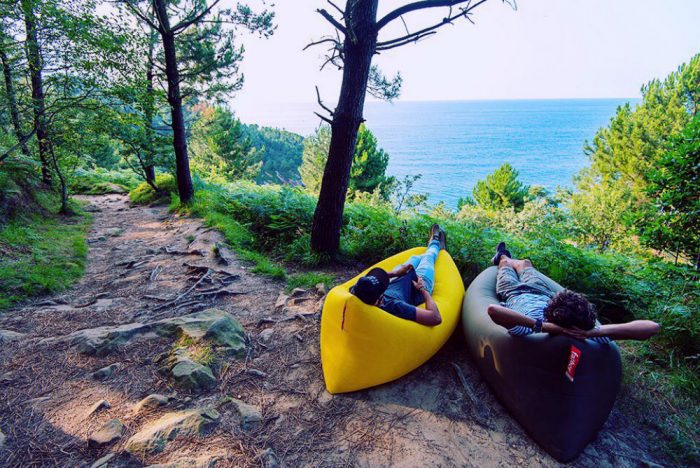 One of the outdoor industry’s trendiest and most-copied innovations just received a design patent, and the brand that owns it is taking action against competitors.

Fatboy USA is now the proud owner of the design patent for the inflatable lounger (/couch/pouch/hammock/bag/sofa).

The number of “inflatable couch” makers skyrocketed over the last year. At the 2016 Outdoor Retailer convention, the perimeter booths and pavilion vendors displayed many near-identical knock-offs.

But earlier this month, the U.S. Patent and Trademark Office granted Fatboy USA the rights to its Lamzac inflatable lounge seat. According to Paula Masters, CEO of Fatboy, the patent protects the design against any lounger that is “substantially the same.”

“Fatboy USA plans to take action and protect our rights to the full extent,” she said. “We have file[d] suit against two infringers already, with more to come. And if we need to, we will also address the retailers that continue to sell product from infringing competitors.”

According to public court documents, Fatboy USA filed lawsuits for patent infringement against Value Max Products LLC, makers of the Aero Lounger, and EMRG LLC, which brands the Pouch Couch.

While there are many domestic and foreign replicas on the market, perhaps none is more noteworthy than ENO’s Billow Air Lounger. 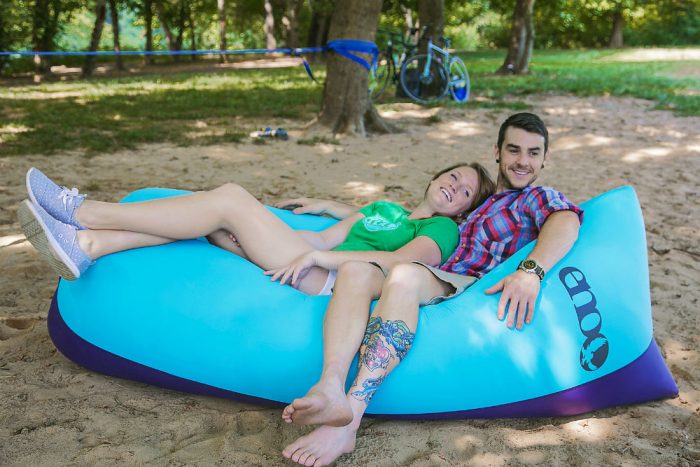 On the heels of this year’s OR summer market, the brand sent a press release to formally announce its partnership with recycled fiber brand REPREVE to manufacture the “First-Ever Inflatable Lounger Made from Recycled Plastic Water Bottles.”

Whether that falls within the category of “substantially the same” remains to be seen, but the Billow is strikingly similar to the Lamzac.

ENO marketing manager Amy Allison confirmed the brand was reviewing the patent and expected some changes would come, but could not comment further.

We have previewed and reviewed various inflatable loungers from various brands.

A take-anywhere cushion of air? We test the WindPouch, a new product made for getting supine in the outdoors. Read more…

The Lamzac was invented and premiered in 2010 on the Dutch television program, “Het Beste Idee van Nederland” (translated “The Best Idea In The Netherlands”).

Like America’s “Shark Tank,” Dutch inventors attempt to gain notoriety and funding for their projects on the show. Marijn Oomen, the Lamzac’s creator, won acclaim on his appearance there.

In light of the U.S. Patent Office’s decision, that is credited as the inception of “scooping air into a deflated bag to create shapes that could then be used for seating,” according to Masters.

Oomen partnered with Fatboy USA to mass produce the Lamzac, which hit the market worldwide this year. The design patent for the Lamzac was granted to Oomen, who has assigned it to Fatboy USA.

When asked if Fatboy could identify any other competing brands that may or may not be infringing on the patent, Masters had no comment.

Up Next: Patagonia’s Revised Mission: Do Good