Looking for a new bird dog to join your family? A bird hunting expert breaks down the best hunting dogs for the field and the family. He also gives concise advice for the early training of your new best friend.

In my newly released book, “Pheasant Dogs,” I talked with a wide variety of “dog people” to learn what makes a great pheasant dog. Through these entertaining conversations, I gleaned a world of valuable advice, including these seven key tips to finding the dog that’s right for you.

1. Start With the Breed

Seems simple, right? The breed should match the hunter. If, for example, you always want your dog to stay close, you probably wouldn’t pick a big-running pointing breed. Likewise, if you regularly hunt late-season pheasants in heavy, snow-choked cover, a bigger breed like a labrador or Chesapeake Bay retriever might be better.

Or maybe you want a certain look. English setters and Deutsch-Drahthaars perform similarly in the field, but they certainly don’t look alike. Same with labradors and springer spaniels. In the end, the real choice is pointer or flusher.

Award-winning videographer Dave Roll has some advice on that: “A pointing dog is a wildlife videographer’s best friend!” It’s simple – you know where the bird is before you start shooting, with a gun or a camera. And his Brittanys come in handy for training new hunters, too.

“You can walk the new person up to the dog and say, ‘This is what’s about to happen,’” he said.

Roll is right: You can’t really do that with a flushing breed. But I’m still a lab guy!

Tom Dokken is a nationally renowned dog trainer who consistently turns out both champion field trial dogs and personal hunting dogs. His advice is to start with the pedigree regardless of breed or breeder. “Field trial titles give you that benchmark,” said Dokken. “There just aren’t a lot of other ways to quantify it.”

Occasionally, someone will say to Dokken, “I don’t need a really good dog because I don’t hunt that much.” His response is right on: “I say you need a great dog. You need the best dog I’ve got, dude!”

Pheasants Forever’s Emy Marier got her flat-coated retriever, Lux, from a breeder who made the puppy choice for her. That’s common for several breeds where line purity is a primary concern for breeders. Lux is now a fantastic pheasant dog, but Marier will do it differently next time. A dog with higher prey drive would have required less training effort on her part. “Next time,” she said, “[I’ll tell the breeder] I want the hunter in the pack.”

Brian Lynn was the Gun Dog editor at Outdoor Life for years. He said the basics are all you really need to hunt the dog. The finer points can come later, but you need the basics, said Lynn. “Sit, stay, heel, here. If you can do that, even if the dog isn’t great, you can hunt behind it because you’ve got control.”

Don’t rush the live-bird training, either. Wings are fine for young pups, but dogs get their permanent canine teeth at about 5 months. Before that, something moving in their mouth can be uncomfortable. Dokken calls 5 months “that magic period when they’re super focused.”

And don’t rely on an older dog to show the youngster the ropes. The older dog will get all the action. According to Dokken, “You’re actually cutting the younger dog out of the experience he should have.”

4. Let Them Have Fun 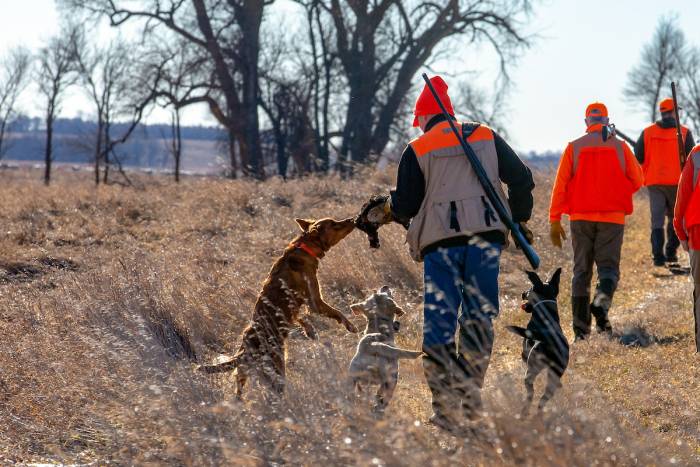 Ron Schara is the host and producer of Pheasants Forever’s TV show, “The Flush.” He admits, however, that his labrador, Raven, is the real star of the show. He also points out that Raven came from Dokken’s Oak Ridge Kennels. Schara explained that with Dokken, “you send him a happy dog for training, and you get a happy dog back!” That’s not true of every trainer. A huge part of the trainer’s responsibility is learning the individual dog. A hard hand at the wrong time can ruin any dog.

“Dogs live in the moment,” said Dokken. “It’s not like you put him away and he sits there and thinks about what he’s done.”

John Zeman is one of the most accomplished amateur trainers in the country, and he agrees. With his field champion German shorthairs, he said, “For that first season, let them have their fun. If they’re bumping and chasing birds, I don’t get too excited about it.”

5. Make Them Part of the Family

This tip might raise some eyebrows among the hardcore trainers out there. For a long time, hunting dogs were relegated to a concrete kennel out behind the house. They were well-trained, but pheasant hunters treated them as little more than tools of the trade. No more.

For Pheasants Forever’s Bob St. Pierre, his shorthairs, Trammel and Esky, couldn’t be any more important to his family.

“Maybe we anthropomorphize them a little bit,” said St. Pierre, “but they fill a void for us … our path in life is bird dogs.”

Chris Kalis is another Pheasants Forever staffer, and he agrees that his pudelpointer, Blaze, is an important member of the family. “Blaze has been really good for my family, especially my son, Mason.” A kid and a dog is still a powerful combo.

Some people, like professional trainer John Haugland of Go Bird Retrievers, favor certain dogs because of their size. Haugland is a Chesapeake Bay retriever guy at heart because he loves hunting wild roosters in snow-choked cattail marshes. December is his month, and Chessies are the dogs for the job. “I like how durable they are,” said Haugland. “You can put them in a 40mph wind in a blizzard, and they just go.”

Pheasants Forever’s Anthony Hauck has a different theory. He has two field-bred English cocker spaniels, Sprig and Smidge. According to Hauck, those little dogs follow the same tunnels through the snow-choked cattails that pheasants use. “These cockers have a knack for just burrowing and finding those tunnels,“ said Hauck. “They eat less, too!”

7. Learn From the Dog

Dogs know things you don’t. That incredible canine nose has them working in a world vastly different than yours. Watch and learn. The well-trained dog will listen to your commands and respond, but that same dog will also be giving you clues as to what your next command should be.

If your spaniel’s tail is vibrating at a thousand beats per minute, she might just be onto something important. If your setter is constantly turning back behind you with his nose in the air, pay attention. 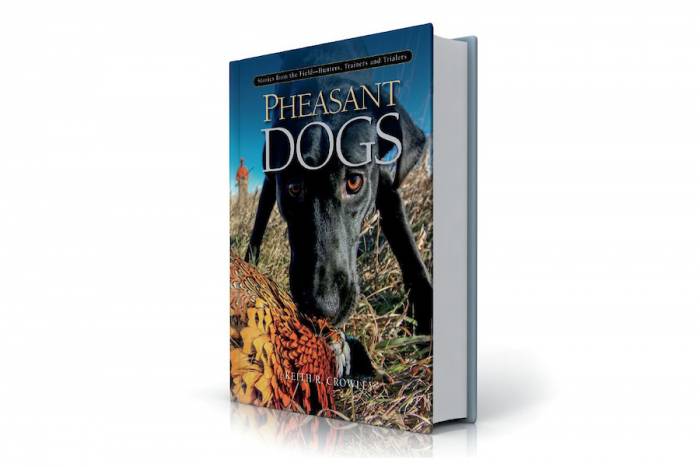 Besides the obvious fact that dogs are better equipped to find pheasants than you are, they also have other things to teach.

Julia Schrenkler wasn’t even a hunter when she got her German shorthair, Wren. That dog rocked her world. Schrenkler, who always loved the outdoors, said that Wren “changed how I view the world.” She started noticing habitat and the minutia of the natural world around her. “I wasn’t really a conservationist until I hunted,” she said. She’s a passionate hunting advocate now, and she has Wren to thank for that. Said Schrenkler, “I just wanted a dog, and in the end, I got a lifelong passion.”

Up Next: Patagonia Launches ‘Hose-Down’ Industrial Apparel to Fight Off Mud, Grime, Blood