Forgoing all the fancy extras, Somewear relies heavily on users’ phones to power its wearable hotspot. But does that ease of use make for reliability headaches? We put the app-based satellite communicator to the test.

Simplicity can help save lives in an emergency. That seems to be the mantra behind the Somewear Global Hotspot, which works exclusively through an app for its two-way communication and location tracking. Beyond an SOS activation button, the device is free of all standalone functionality.

This design simplifies the hardware side of things and makes use intuitive. But it also adds another burden to a phone’s battery life. Launched in spring 2018 on Kickstarter, Somewear released to the public for $350 in November. Subscription plans on the Iridium satellite network range from $100 per year for very little usage (10 messages and 24/7 SOS monitoring) to $50 per month for unlimited messages and pin drops.

I tested the unit for a couple weeks leading up to its debut.

In short: The Somewear hotspot is an extremely easy-to-use global satellite messenger. Because all functions other than SOS work through an app, sending a message or coordinates is as simple as sending a text. Tracking also proves near effortless to start and share. And the app opens up the potential for other functions, like the now-available weather reporting. Because the limiting factor is the user’s phone battery life, Somewear is an ideal companion for shorter adventures. 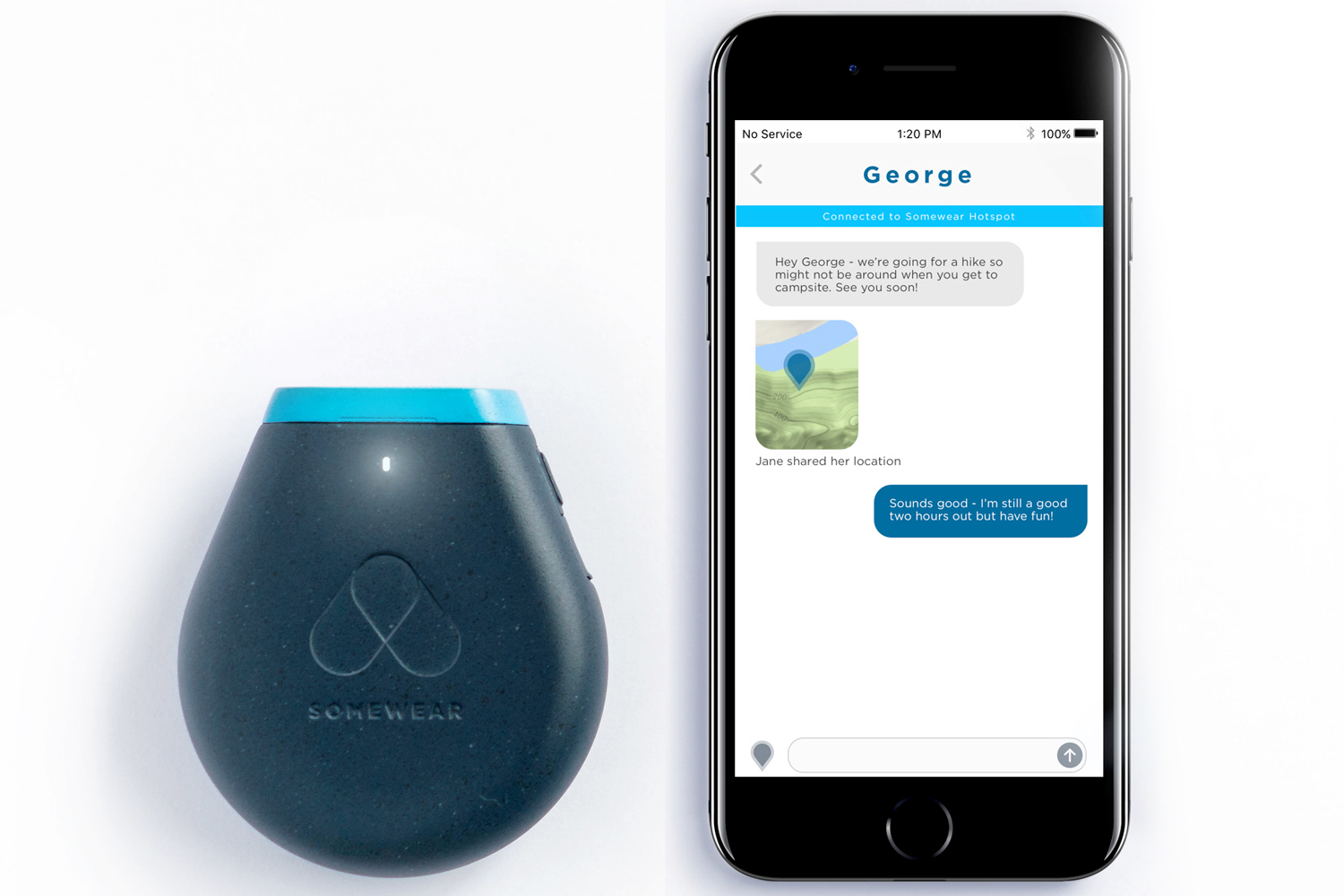 Somewear Labs took the minimalist route with this device. The unit measures 3 x 3.6 x 0.8 inches and carries a verified weight of 4.2 ounces. Its semicircular shape bears no corners or edges to catch on gear or stray branches. And there is an elastic clip to secure it to a pack or gear loop. The exterior surface remains void of buttons or a screen, just a blinking LED light that indicates battery and power status.

A cap shields the SOS button, which must be pressed for six seconds to activate an emergency transmission. Once SOS is activated, LEDs confirm the status of the message: sent or received. Plus, the user can also cancel an SOS with proof of cancellation.

Using the Somewear app (Apple and Android) was super intuitive. I didn’t require instructions of any kind to successfully send messages, location, initiate and share tracking, or get weather updates. And sending a text message (U.S. or Canada phone numbers) or email proved as simple as sending normally through the phone alone.

Although messaging services were available to the recipient without the use of the app, having the free app on both ends of the exchange streamlines the user experience by eliminating extraneous links and steps.

Meanwhile, location services require the recipient to use the app — and all functions are also accessible by web.

For now, tracking waypoints deploy at 30-minute intervals. Though this isn’t user-definable at the moment, Somewear Labs said it plans to add flexible intervals in the next app update.

The app’s weather function generated current conditions, an hourly forecast, and a seven-day forecast. Adding to the system’s simplicity, besides numbers for high and low temps, the info displays as rudimentary icons: high sun, cloud, wind, or precipitation.

Connecting the hotspot to my phone via Bluetooth LE only took a few seconds. And the satellite connection status and hotspot battery life quickly appeared on the app upon linking. I confirmed through the app’s delivery status (and audible notification) that all the messages and locations I sent during the testing period successfully transmitted. And, depending on satellite connection status, my transmissions took a few seconds to a few minutes — which is similar to other satellite messengers.

Somewear advertises the Global Hotspot’s battery life at more than 1,000 messages, sent or received, per charge. However, my seat-of-the-pants battery life analysis put that at a much lower number. During my initial testing period, Somewear showed a 10 percent drop in battery life after sending out only two messages and concurrently tracking for an hour. Thankfully, the app used cell signal when available, saving as much drain on the hotspot battery as possible. 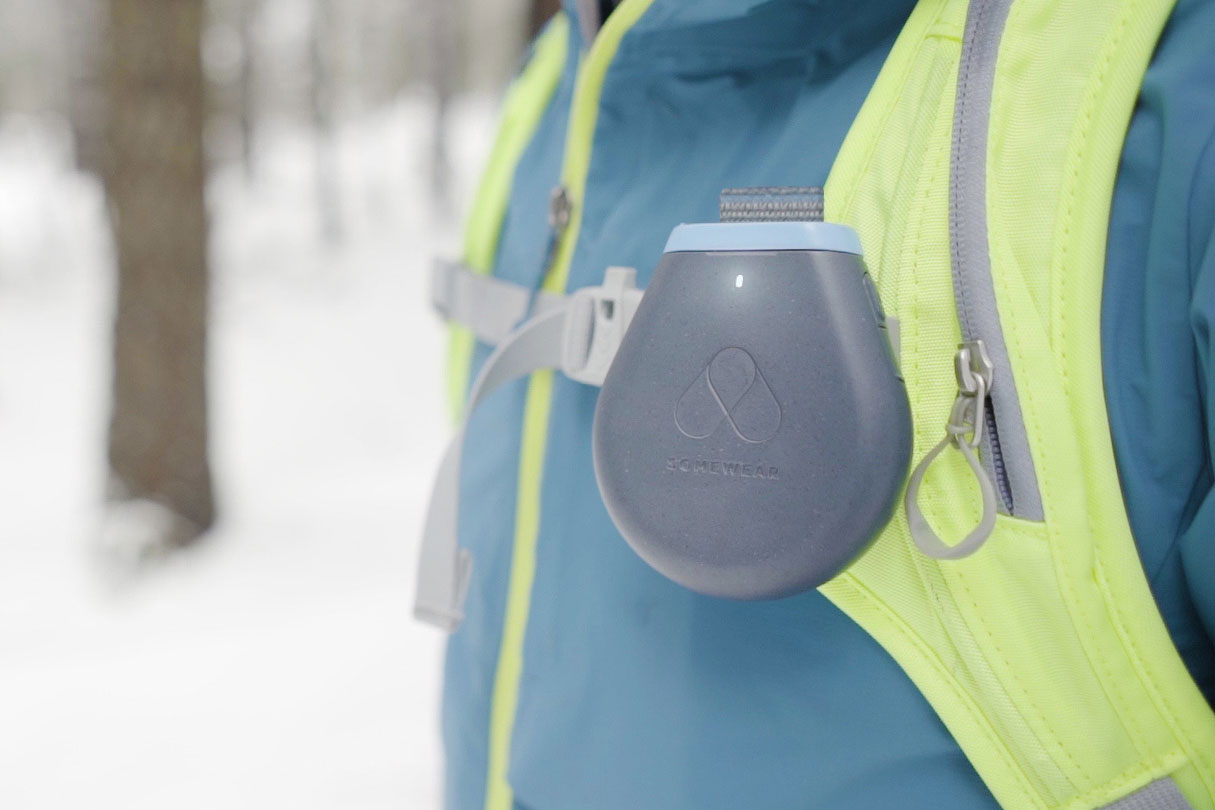 The device’s tracking function performed flawlessly during my test. And because the app can download maps, users can zoom in on their current location with better resolution of position. Unfortunately, the maps aren’t topographic or satellite-based.

The unit felt very robust, and its simple design promised little could go wrong. The lack of buttons and a screen, coupled with the MIL-STD-810 shockproof rating and IPX7 waterproof rating, lent confidence to the hardware’s durability. What’s more, Somewear touts the unit will work between -4 and 140 degrees Fahrenheit.

While I didn’t subject the device to anywhere near the limits of these ratings or claims, I did put it through some rough handling, dust, and light rain. But none of these burdens affected the hotspot. From what I found, the phone is the weak link within the Somewear system. Keep the smartphone charged and safe, and Somewear should remain stout.

The only part of the hardware that drew any concern was the stretch cord clip. Over time, I suspect this could lose elasticity or suffer abrasion.

Where Does the Somewear Global Hotspot Fit?

There are a handful of proven satellite-based emergency communicators. Many of these put functionality into the unit itself, freeing them from a phone’s or app’s connectivity. This offers some clear advantages in reliability. 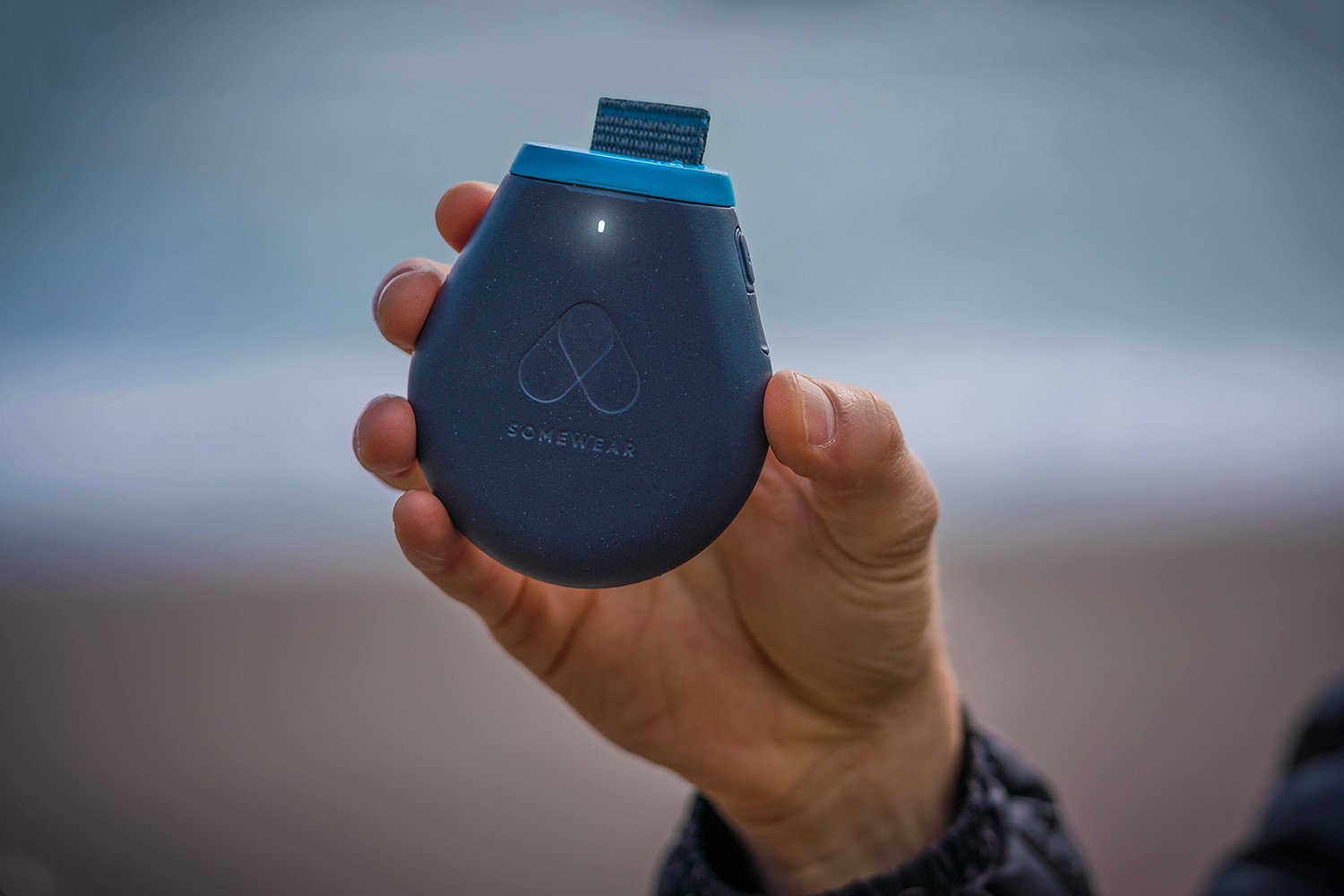 But I found the Somewear Global Hotspot was the easiest to use of all the messengers I have tried thanks both to its simplicity and the intuitive app. Because of smartphones’ ubiquity, many users should feel comfortable using the Somewear device.

But this setup has its drawbacks. While most adventurers I know carry a phone, they do so primarily to capture images. So, even on airplane mode, battery life remains a significant issue. For me, this relegates the Somewear Global Hotspot to weekend backcountry adventures.

In a way, though, the weakness of the Somewear system also provides an advantage. Like all apps, Somewear will evolve. And because the Somewear Labs team includes software engineers from Apple, Intuit, and Tesla, I expect it will expand app capabilities in the future. The company hasn’t said what it has in store, but I imagine there will be a host of improvements and added functionality to address user concerns and suggestions.

Up Next: Improve Your Waterfowl Game With the onX Hunt App