A wave of unique female-only programs continues to pop up at ski resorts nationwide. GearJunkie dropped into the recently launched Elan Women’s Weekend camp at Crested Butte Mountain Resort to learn more about the she-shred.

Women’s ski programs aren’t new. But often, camps don’t include high-end gear demos, and not all women have learned the mechanics behind their ski gear. Yet.

The Elan Women’s Weekend, a ski camp for women that focuses on testing gear, aims to help change that reality. This new event is among a growing number of curated experiences specifically designed for women that are launching across the country, according to SnowSports Industries America.

Krista Crabtree, the founder of the Elan Women’s Weekend and director of the Eldora Women’s Program, has a mission to empower females via skills and technical knowledge.

“Women’s clinics and camps are a place where women can push their boundaries and learn without competition, showing off, or having testosterone being fired up. Now, almost every ski resort has a women’s program,” said Crabtree.

Here are a few reasons why all-women big-mountain ski camps are rad, according to the women who know best.

Demoing new women’s-specific ski gear was a unique driving element of the Elan Women’s Weekend: Not every camp weaves in a chance to test gear. Crabtree has long seen the limitations caused by ill-fitting skis, so she was excited to teach participants more about the technology behind their sticks.

In fact, she chose Crested Butte Mountain Resort (CBMR) for this ski camp due to the gear-testing environment: a balanced quantity of intermediate, advanced, and expert runs that span across narrow gullies, extensive chutes, bowls, groomers, and traverses.

“I want to help women know their ski equipment on a professional level, to help empower them with knowledge and keep them from being taken advantage of on the retail floor,” said Crabtree.

And this winter, Crabtree will co-host the 2020 Elan Women’s Weekend on steep terrain at Taos Ski Valley, New Mexico. 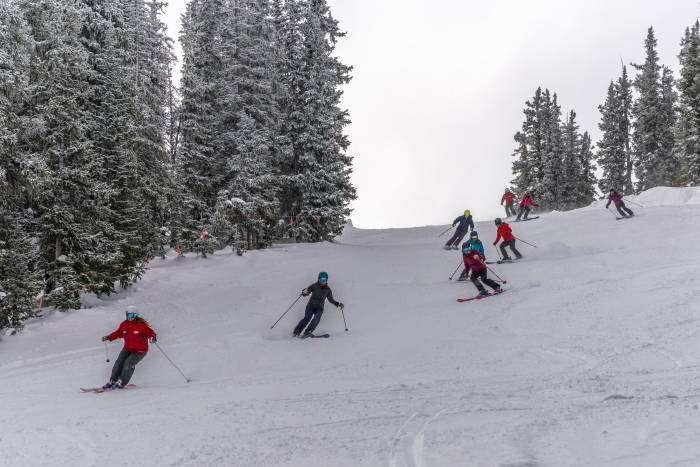 Day One of the Elan Women’s Weekend, Liz West, 57, was the first skier to charge down a line of moguls — with uncharacteristic boldness. After several stellar turns, she crested a large bump with her leading leg, her ski popped off, and she flew forward into a penguin slide.

“I’m very careful on skis. I almost never fall. But I went past my comfort zone and realized I can live through a fall. Having a wreck can help you know what you’re capable of and to be less afraid to try something new,” said West.

To excel on skis, trust is integral: Skiers need to trust their abilities, equipment, ski partners, and guides.

“In a multiday ski workshop, your guide really gets to know your skiing. You build a relationship and trust with one another. The benefits are seen in the proceeding days: You come back with that trust, and you get to grow and excel even more,” said Rachel Hartmann, a 7-year CBMR ski instructor and Elan Women’s Weekend coach.

Camps can be a pivotal stepping stone for bigger mountain goals and international dream trips. “Anyone can go up the mountain and slide their way down; I want to ski with the right technique and do so safely,” said Kali Green, 33, who selected the Elan Women’s Weekend to sharpen her skills on CBMR’s challenging steeps, traverses, and chutes.

Green was prepping for the Haute Route, a classic ski tour that connects Chamonix-Mont Blanc in France and Zermatt in Switzerland, which she completed 2 weeks later. 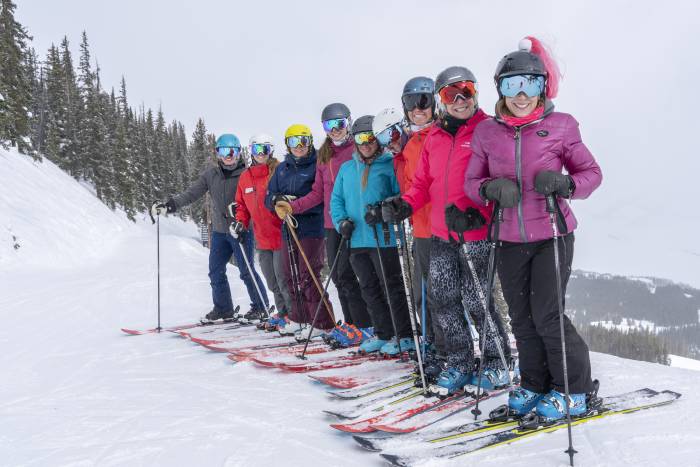 The nation’s growing pool of freelancers and remote professionals might have flexibility with their time management. But some can be hard-pressed to find ski partners with the same schedule and goals.

“I don’t have a core group of ski friends. I often ski alone during the week. And I wanted a new social experience. Skiing is fun with a group,” said Laura Nelson, 38, who participated in the Elan Women’s Weekend.

And in some cases, participants even form lifelong bonds. Karen Safran, 50, met Crabtree 12 years ago in a women’s ski clinic. Now, Safran has “followed Crabtree all over the world” for women’s workshops in Canada, Japan, and South America.

In general, skiers that share the same physiology and gender can gain confidence through their relatability and communication needs.

“I can say to a woman, ‘I know your hips are back and your femur bones come to a wide Q-angle. We’re going to talk about firing-up your IT-band so that your knee will track over your toes.’ A guy can understand — but I feel it because of my body,” explained Crabtree.

The same is true for emotions.

“I can feel when there are fear and apprehension in a woman. For instance, we might be a little freaked out by Crested Butte’s Banana Chute: You have to make this move over a rock, and she might freeze,” she said.

“I can say, ‘Hey, this is how we’re going to do it. We’re going to compartmentalize this and take it one step at a time. You can do this; I’ve seen you do this.’ There’s a supportive element of working with women.” 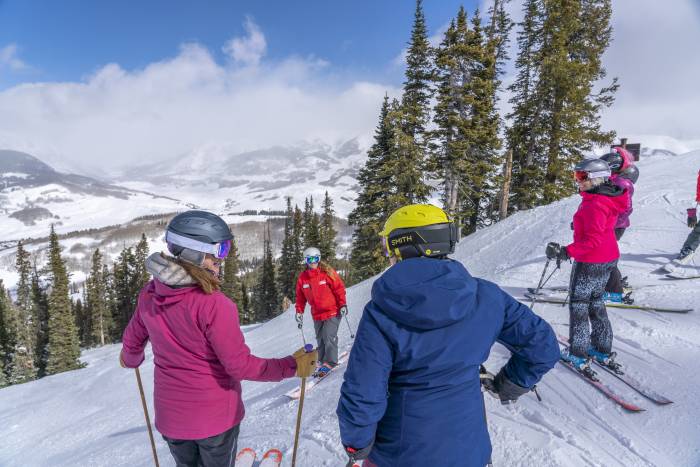 Ski camp participants might be motivated to experience a new ski mountain. But they may also lack a strategic approach to choosing the terrain. Instructors can optimize each day and help students build physical and mental momentum.

“For the Elan Women’s Weekend, our ski instructors — Rachel Hartmann and Angie Mauldin — know this mountain like the back of their hand. They’re really good with group dynamics and working with women. They were masterful at building up what we skied based on everyone’s comfort level,” said Crabtree.

Crabtree and Safran recounted one of their former trips, Chick in a Chopper, and everyone — all 15 women — cried on the first helicopter ride.

“There was so much emotion, fear, and joy. If a woman was there with her husband or boyfriend, maybe she wouldn’t have let all of her feelings go. That’s another cool thing about being with all women: We have the space for our emotions to be authentic and come out. We’re here for each other,” said Crabtree.

These all-women ski camps help skiers and snowboarders strengthen their skills on the slopes.

Professional skier and guide Kim Reichhelm — one of Skiing Magazine’s “Most Influential Skiers of All Time” — launched into hosting global camps 30 years ago.

This 3-day camp features a gear-demo. The New York Times coined it the “Bentley” of ski clinics.

Up Next: REI Sale: Save 48% on the Mountain Hardwear Ghost Whisperer Down Jacket