Cody Townsend is on a mission to ski all ’50 Classic Ski Descents’ in North America. He and Nick McNutt ventured to Combatant Couloir on the tallest mountain in B.C. to ski number 41. And the conditions weren’t great.

The British Coastal Mountains in British Columbia are renowned for unpredictable weather and conditions. Sometimes they can be mind-blowing good. And sometimes, they can get pretty choppy. As Cody Townsend and Nick McNutt learned the hard way, the region’s conditions can make for flat-out terrible skiing.

Townsend had traveled in his van all the way up to a remote area in B.C. to ski a legendary couloir known as Combatant Couloir. He was joined by Teton Gravity Research athlete Nick McNutt.

But from the get-go, this trip was a doozy. It was plagued by variable weather, a wisely hesitant helicopter pilot, and plans that kept on changing.

At first bad weather prevented them from getting to the drop-off point. Then just after the weather broke and the helicopter was able to get them out there, weather rolled in again. And, again, they were stuck. But this time, they were out in the middle of nowhere. Their pilot had called it “one of the worst places on the planet.”

So what did they do? They skied. It’s what they traveled all that way to do, after all. So, on the second morning, as clouds were clearing out, they embarked up the infamous couloir. As they climbed, though, they realized that things had changed since the last time someone had skied that line. What was once a classic descent might not be so classic anymore.

But when you’re at the top of a run like that, there’s only one way down. Even if it’s going to be a rough ride. So Townsend and McNutt sent it. And once they reached the bottom, their next challenge reared its ugly head: getting out. 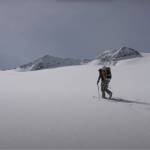 'The FIFTY,' Episode 40: Townsend Trudges on Bugs to Rogers Traverse

Is ‘traverse’ really the French word for ‘no skiing'? Get Cody Townsend’s take in this schlep-happy episode of 'The FIFTY.' Read more…