After nearly 10 years away, Red Bull Rampage returns to Southwest Utah, the site of the contest’s ‘most iconic moments,’ organizers said.

Even the world’s best feel the thrill of Virgin, Utah’s gravity-defying courses.

“I was scared as hell,” Szymon Godziek says after flying off a ramp with more airtime than E.T. the Extra-Terrestial.

Red Bull Rampage kicked off back in 2001, and the sports media company celebrated its 20th anniversary last year.

“This year, Red Bull Rampage wants to spotlight the future of freeriding — from the new crop of athletes grabbing the baton and continuing to innovate the sport to the changemakers that drive the scene to the mind-blowing action itself,” the company said on its website.

Want to catch all the action? Learn how to watch the event with our how-to-watch guide. 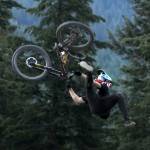 Absent from Red Bull Rampage since 2019, Rheeder's new vid for Commencal shows the Canadian pro is more than ready for a comeback. Read more…