Rocky Butte is helping keep Portland weird. For rock climbing near downtown, read our guide to this eccentric and gritty urban crag. 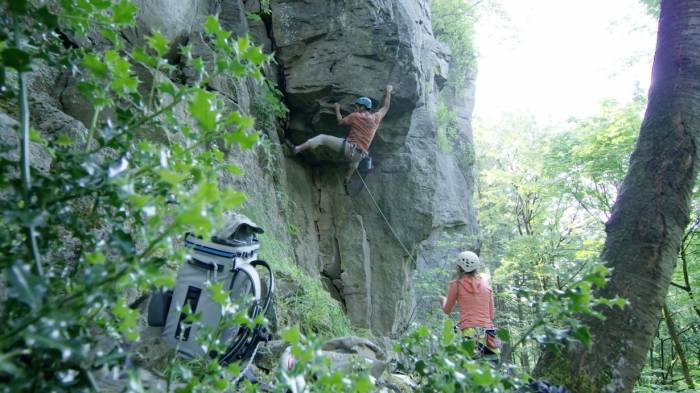 Rock climbing in city centers is rare but hardly unique to Portland, Ore. From bouldering in New York’s Central Park to developed crags in towns from Spokane to Chattanooga, the past decade has seen a rise in urban climbing destinations as people seek adventure closer to home.

Rocky Butte is Portland’s little secret, a mix of nature and grit.

There’s something oddly appealing about this climbing area. Access to the crag is unparalleled: It’s just 15 minutes from Portland’s city center. That makes it popular among the happy-hour crowd and motivated pre-dawn, pre-daily grind climbers. 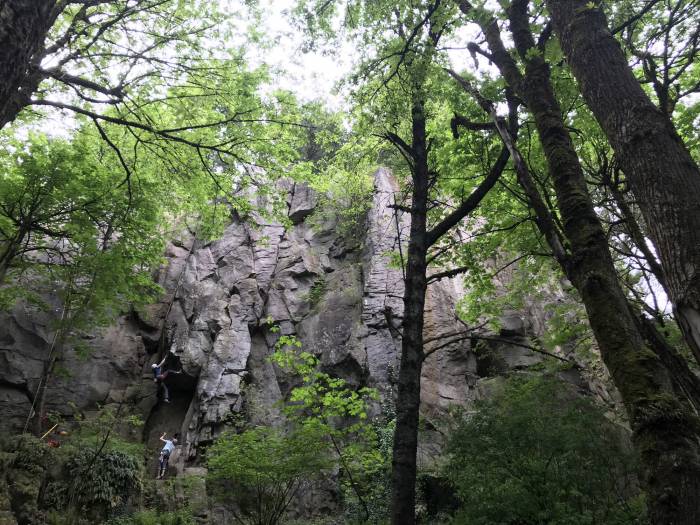 It’s also got a range of routes. And shade.

“Since it’s in the trees, most of the crag is shady all day long,” said local climber Kati Simmons, who visits Rocky Butte regularly. “It’s climbable even on really hot days.”

Inside Climbing Adventures at Rocky Butte 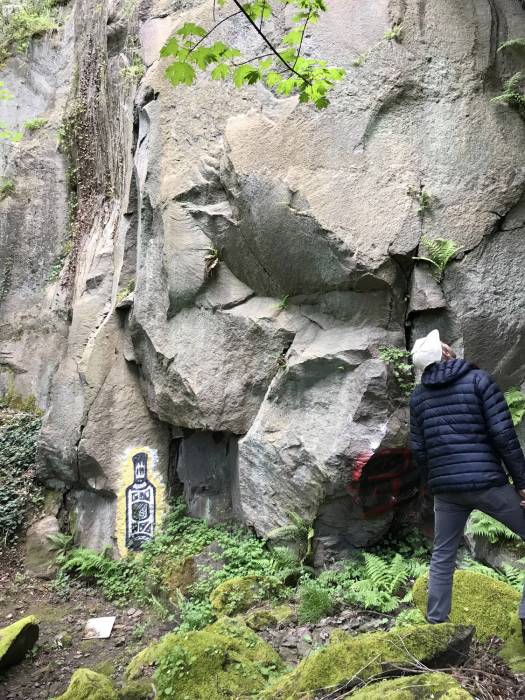 Rocky Butte has about 40 basalt-rock climbs ranging from 5.7 to 5.11. The majority are top-rope, but there are trad and sport options as well. Most ascents are around 30 to 35 feet vertically, with one lofty climb, Vertical Therapy, pushing 60 feet.

There are a few bouldering areas too: a small wall south of the main trail as well as a road underpass and an old fort at the top of a hill. On clear days, you can catch views of Mt. Hood from the summit. 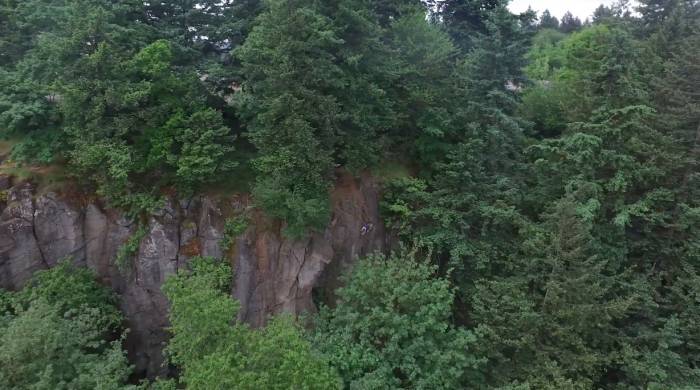 Adding to the urban climbing center’s oddity, a jail by the same name once stood atop Rocky Butte. The east face of the rock was also quarried in the 1940s — strangely to build another area jail.

Rocky Butte is located in Portland’s northeast corridor next to Interstate 205. That means it can get noisy, especially at rush hour. Typical urban debris is common as well.

And the location can get slick with near-daily showers in the rainy season, which typically starts in September. In fact, rain is more common than snow throughout the winter, so climbers should be cautious.

What to Watch for: Positives and Negatives 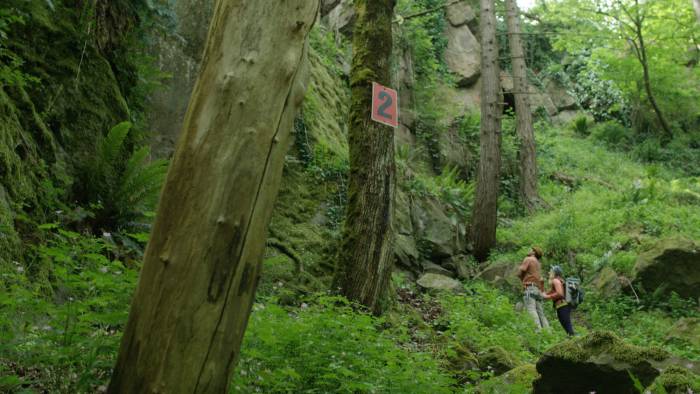 “It’s close to the city center, there’s a good amount of rock to get you tired, and the area is really beautiful,” he said. “But a day out there is always an urban adventure because of the homeless encampments at the base of the wall.” 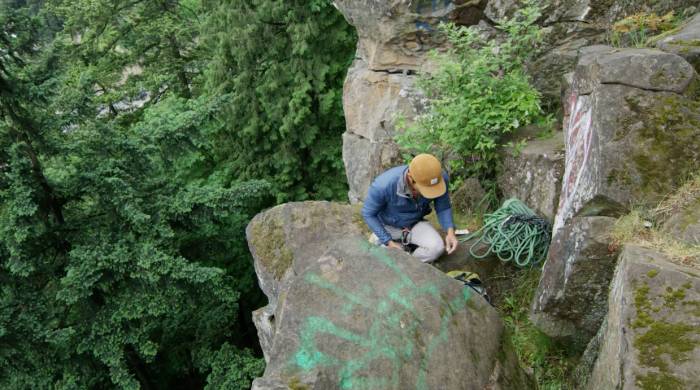 Ruiz also warns of broken glass, an occasional needle, and a good amount of trash. “Definitely not The Chief, but then again, we’re in Portland, not Squamish, right?”

Regulars recommend a simple solution: Bring a bag and haul out a little trash after each climb. 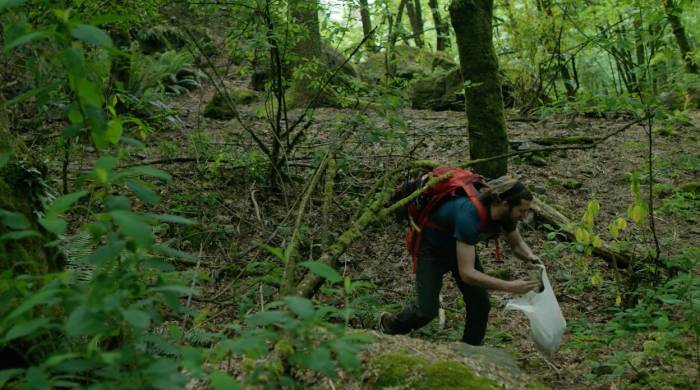 For safety reasons, Simmons also suggested wearing long pants to protect against poison oak and advised against climbing at or past dusk.

On the Mountain Project website, Caleb Phillips, a climber from Boulder, Colo., suggested another way to add to the adventure at Rocky Butte: riding your bike out there.

“If you give it a chance, you can fall in love with the dirty appeal of the Butte,” he wrote. 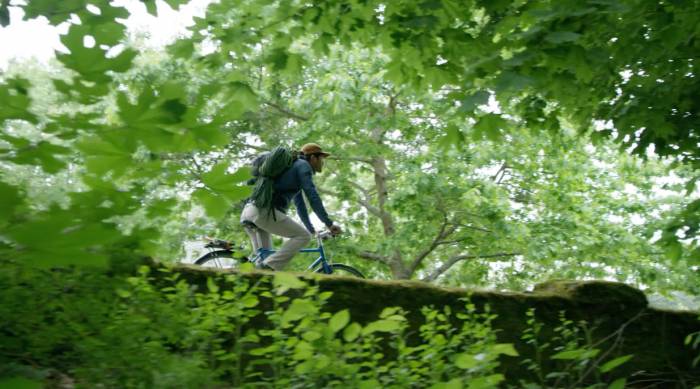 Getting to Rocky Butte From Downtown Portland 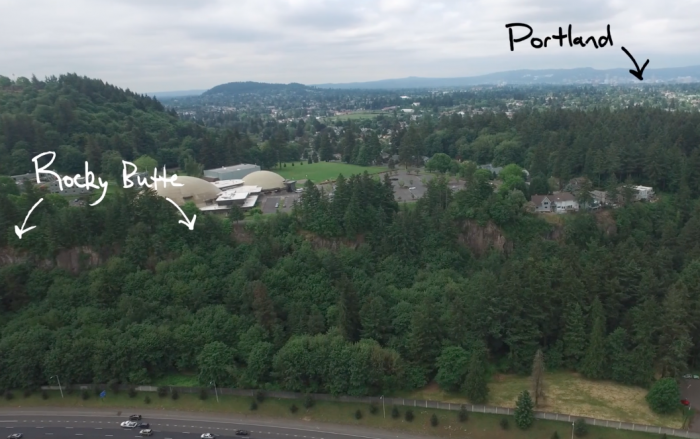 From downtown, take I-84 East to the 82nd Street exit. Head north on 82nd to Freemont Street and take a right. Freemont turns into 91st Street, which leads to Rocky Butte Road. This road loops the top of the rock, which means you’ll need to rappel in for most top routes — or face a sketchy scramble down. 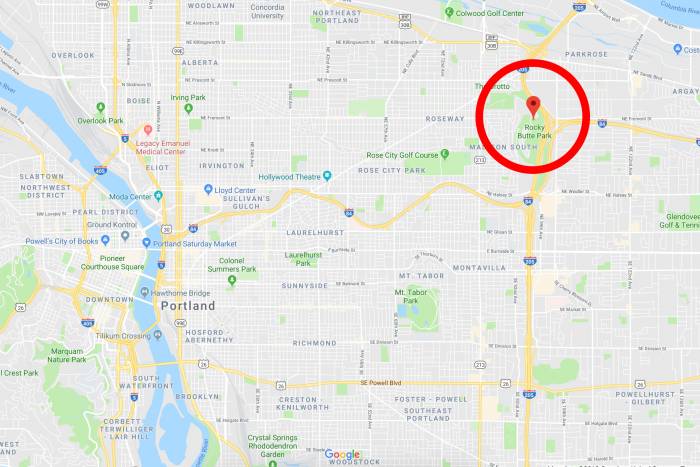 Park at the gravel pullout across the street from the old church domes. Rocky Butte cliffs are off to the east past the trees.

To access the cliff, a primitive path starts at a Catholic outdoor shrine called The Grotto. 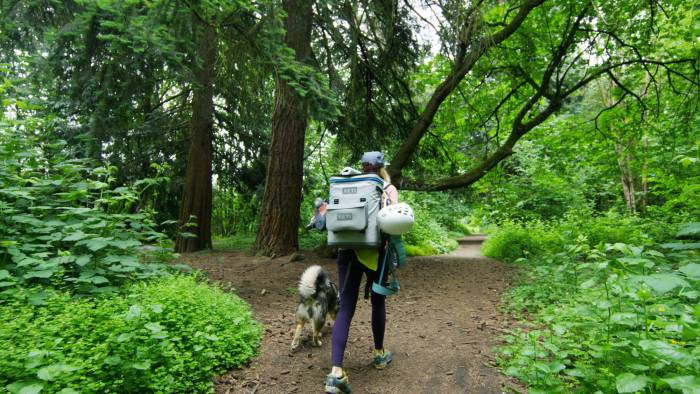 As for overall access to the great urban outdoors, it doesn’t get much easier than Portland’s gritty little secret: Rocky Butte. Climbers, come with an open mind.

This article is part of The Great Urban Outdoors series sponsored by YETI. Learn more about the Hopper BackFlip 24 cooler featured in the Rocky Butte adventure here.

Up Next: Camalot 2019: BD Updates a Classic With ‘Trigger Keeper’ Tech