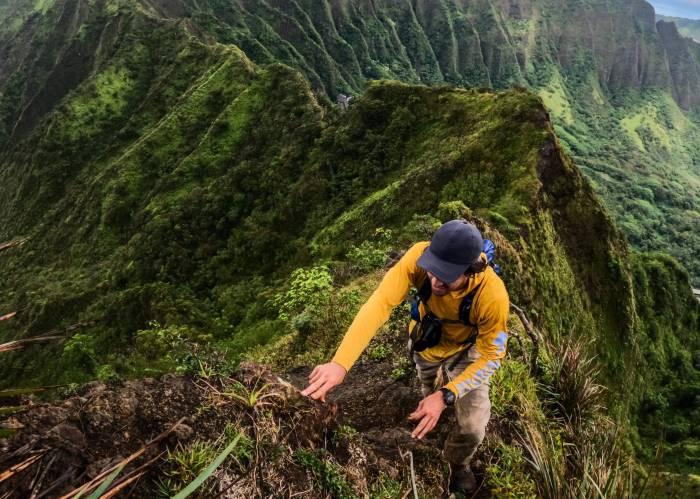 One Oahu resident is attempting a mental feat for mental health: ‘Everesting’ Hawaii’s Koko Crater, except he’ll aim for the height of the Mauna Kea volcano. That’s 33,500 feet from sea floor to summit.

On August 24, Nicolas “Nico” Escobar will go up and down the Koko Crater stair trail 37 times in a row, in an “Everesting” style in order to raise money for a mental health charity. Though, we have to say, “volcano-ing” sounds just as cool.

Nico Escobar grew up in San Gil, Colombia, so it’s no surprise adventure has become the centerpiece of his life. As a child, Escobar and his siblings were encouraged by their parents to spend time outdoors; their weekends were spent hiking, fishing, cliff jumping, and fossil hunting.

After years of hearing his father tell stories about running, Escobar finally decided to give the sport a try. On a drive to their grandparents’ farm, his dad dropped him and his cousins off on the side to run to the nearest tienda. That run forever changed the course of Escobar’s life.

“When we arrived, my legs didn’t want to stop moving,” Escobar said. “I still don’t understand it, but somehow my body wanted me to keep going. So, I did, alone, until I arrived at the house. I have been addicted ever since.”

On Wednesday, August 24 (Escobar’s 31st birthday), he will attempt a further Everesting of Koko Crater. He’ll climb Koko Crater past Everest’s 29,000-and-change height to 33,500 feet, the height of Mauna Kea, which is the highest point in the state of Hawaii.

His goal is to complete the 37 Koko repeats, equivalent to 33 miles, in under 20 hours — his longest event to date. Aligned with Mauna Kea’s total height is his $33,500 fundraising goal for Mental Health of America.

“The ultimate goal for my Everesting attempt is to connect people with better resources to cope with their mental health,” said Escobar.

“Whether it’s reaching out to get professional help, bringing a community together, or just getting outside … If it helps them, I get the joy of sharing what I love, and knowing it makes a positive difference. A win for them is a win for me.”

Why the Koko Crater?

In 2019, Escobar went to Oahu on vacation and after experiencing the nice weather and plethora of hills available for training, he decided to stay and call the island home.

Once settled on Oahu, Escobar found himself drawn to Koko Crater and the 1,048 tramway stairs that lead to its summit (similar in style to Colorado’s grueling Manitou Incline). The short but steep hike (930 feet over less than half a mile) is one of the toughest on the island, requiring both physical and mental strength to safely reach the top.

Alongside his friends, Escobar started “Koko Wednesdays” as a fun way to bring all their friends together and get in a good workout.

Like many young adults, Escobar and some of his friends were dealing with big challenges in their lives. Be it losses, breakups, moves, career changes, or past traumas, many of them found that life’s challenges debilitated their mental health and decision-making process.

Jokingly, Escobar’s friends suggested that he “Everest” Koko Crater — climb up and down the stairs until he reached a total elevation gain of 29,032 feet, the equivalent elevation of Mt. Everest.

Always up for a challenge, Escobar jumped on the idea.

“Whenever I’ve dealt with life changes, I end up going back to exercise,” Escobar said. “That’s where I go to meet my raw self. Running and cycling helps me clear my mind and then proceed to have better judgment on my decisions. Having an end goal like this helps channel that negative energy that I could be having into something meaningful.”

Once Escobar made the decision to “Everest” Koko Crater, he got to work training for that first attempt. Fast forward, and he’s now logged over 300 Koko repeats.

And his latest further Everesting attempt is sure to add a few more to the list. 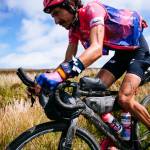 'Conflicts are a bike ride away, all over the world.' — Lachlan Morton. Read more…