It’s the golden age of the beer mile. The world record went down last week. There are international rankings. Here’s how you can get in on the fun. 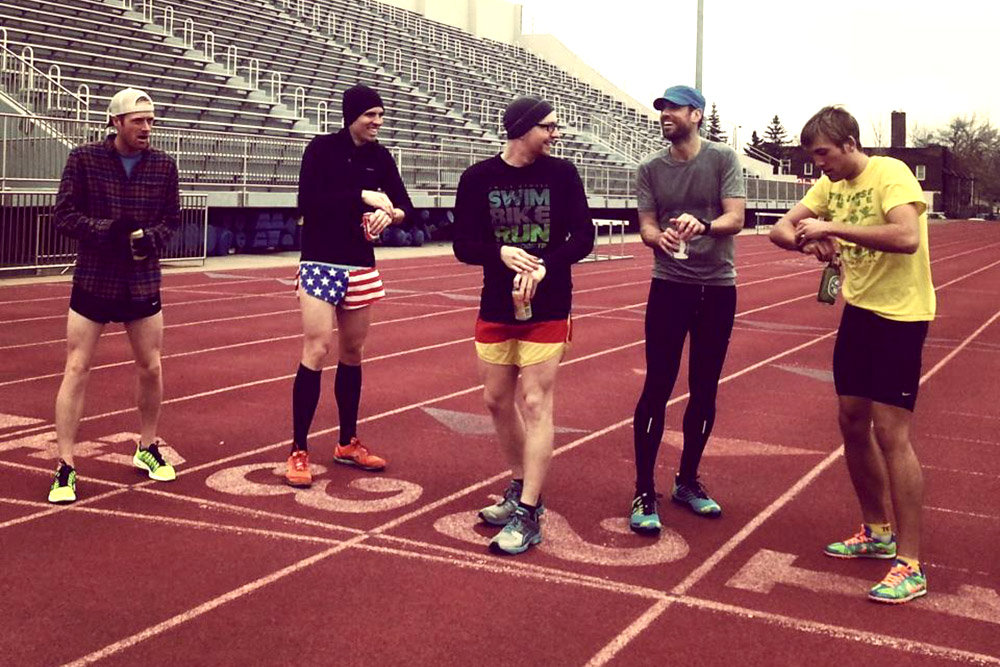 Yes, this is a real sport. Real runners, real beer. The craze started more than a year ago, but the recent news is that Canadian James Nielsen this past April claimed to have ran the first sub-5-minute beer mile. (He posted a video of the then-world record.)

The inaugural Beer Mile World Championships were held in Texas a few months ago, where the women’s world record fell hard to 6:17.76. Then, on one remarkable day last week, the men’s record went down twice in one day; first to Australian Josh Harris, who ran 4:56:25, and later to Lewis Kent, who clocked a 4:55:78.

You don’t need to be a pro to get in on the fun. I’ve run about a dozen beer miles; some have gone swimmingly, and others ended when my stomach contents erupted all over the infield with a spraying velocity suggesting someone had just struck oil.

Each of them has been a blast. Here’s a quick guide, a few things I have learned along the way.

The Rules: There’s no governing body for the beer mile, but there is Beermile.com. It records an all-time performance list and outlines all the rules required for the beer mile to be officially ratified by beer-milers who take this seriously enough to care.

The Beer: Watery brews are not allowed. The beer drank during your run must have an alcohol content of 5.0 percent or higher. This disqualifies more chugging-friendly beers than you’d think.

Container Concerns: Beer must be consumed from cans (or bottles if they are a full 355 ml), and no specialized cans that expedite pouring (e.g. mega-wide mouth) are allowed. No shotgunning or other tampering with the cans either.

Puke Penalty: Competitors who vomit during the beer mile must run a fifth “penalty” lap at the end. They do not have to consume an additional beer, nor do they need to add additional penalty laps for multiple pukes.

Why does my beer mile need to be officially ratified by beermile.com?
It doesn’t. I’ve run two beer miles in other countries, where we were limited to whatever local lager was sold at the convenience store and used a loosely-measured stretch of road or beach. Those are just as fun. But those times can’t be counted as “official,” which means you can’t get on the all-time list. More importantly, it’s poor form to brag about the time you ran if you’re aided by an ill-measured course or low-alcohol beer.

How can they verify a world record from a YouTube video?
It’s not airtight. There is occasionally some controversy over whether the people in the videos are actually finishing all the beer in the cans. A common way of verifying this is to hold the empty can over your head briefly as you leave for your next lap.

The rules have a caveat for puking? How often do people puke?
All the time. If not during the beer mile, then soon after.

How do I avoid puking?
Burp. You can be the world’s fastest beer chugger and the world’s fastest miler, but that matters not a lick if you can’t clear all the excess gas from your stomach as you bounce along the backstretch. Your stomach is roughly the size of your fist and can only be stretched so far before you involuntarily lurch out its contents like snow from a snowblower.

How involuntarily are we talking?
Even if you know you’re going to puke, it can surprise you. There’s a video where I spend several seconds clutching my knees, ready to regurgitate everything I’d eaten in the last week like a momma bird feeding her hatchlings. But it passed. So I stood up, took a step, and surprise! I wonder if watery puke doubles as fertilizer.

Rugby players can run beer miles? Surprisingly well. They’ve got a chugging technique that can only be honed over many years of parties and grunting. Meanwhile, any amateur drinker can run for a couple months and cut their mile time down significantly.

Some spindly, elite-looking runners with shaved legs will run the beer mile. Will they beat me? Absolutely not. In my experience, the sinewy professional runners who can normally stomp me into the track on an interval session transform into sniveling wimps when handed the task of chugging a second or third beer in the span of a few minutes. Wave as you pass them nursing their latter beverages, and enjoy the insurmountable lead you’ll build before they can finish them.

So chugging is the key? It will make or break your beer mile – particularly the third and fourth beers, when you’re out of breath and the carbonation claws at your throat with the ferocity of a thousand tiny fingernails. Be consistent, and be tough, unlike Lance Armstrong. Will ultrarunners take a perfectly good activity and try to make it “tougher”? They already have. Remind me again why this is fun.

The aftermath of a beer mile will be the most talkative, hardest-laughing affair you’ve ever experienced. Between all the puking, of course.

–Alex Kurt says he owns a personal-best in the beer mile of 6:48 but, unsurprisingly, can’t recall the ABV of the beer he used. He prefers beer brewed where he lives and runs, which is Minneapolis.

Up Next: Race The Sun Around Mont Blanc