It’s not the successes or the failures that define you as a person, but how you respond to them.

That was a hard lesson for Noah Droddy to learn firsthand, but it’s been a bit of wisdom that has changed his life — as shown in the new film from Salomon TV, “We Are All Droddy.”

The Indiana native moved to Boulder in November 2015 with the explicit goal of becoming a full-time, fully dedicated runner. He had two guitars, a 2007 Kia Rio, and a radical mustache to his name, and that was it. He said, “I had nothing to lose.”

He teamed up with a local Boulder running club called the Roots Running Project and started getting coached by Richie Hansen. Running became his entire life — and his sole focus. He was working two jobs and spent every waking moment outside of them jogging, running, trying to shave seconds off of his own personal best times.

And he started to see results. His times started coming down, he started breaking records and placing in races. And then, in 2016, after what he called the “worst 10K of my life,” Droddy blew up. He started getting press, thousands of people started following him online, and he got a professional running contract from Salomon. Suddenly Droddy had become a professional runner.

And of course, that’s when fate stepped in to throw him a curveball.

“I got hurt almost immediately after signing [the contract],” Droddy explains in the new film about his journey.

He blew out both of his Achilles tendons, and in the blink of an eye, everything he’d committed himself to and all the progress he’d made, was ripped away from him.

Droddy could have called that the end. He could have taken that defeat to heart and moved back home to Indiana with his tail between his legs. But, as “We Are All Droddy” shows us, he used that moment of failure and loss to turn things around and to reignite his passion and motivation.

And he came back stronger than ever. 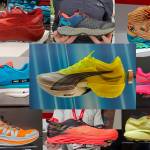 We recently traveled to Austin, Texas, for The Running Event, an annual running-specific conference and trade show, to check out what’s in store for 2022. And this year did not disappoint! Read more…