Knives, knives, knives — for a while there, it felt like every company was releasing a dozen new models each month. It was a great time to be an EDC enthusiast, so long as you could separate the winners from the duds.

With so many new offerings hitting the market, many of the one-time icons of price and design have been left in the dust. This phenomenon has slacked off over the past couple of years, with COVID impacting imports and manufacturing.

Now, companies like Spyderco and Benchmade seem focused on releasing new iterations of classic designs, as opposed to fresh material. As a result, the current state of the knife hobby appears to be one of raised prices and waning innovation (a topic we will cover separately).

In the wake of the aforementioned EDC boom, this seems like a good time to revisit some of the classics that, if not exactly forgotten, are perhaps gone from the daily consciousness of gear enthusiasts. Do these icons still live up to their hype?

Here are five knives that land on varying sides of the question.

The 5 Most Iconic Knives Revisited

This list had to start here. Not just because of the PM2’s heritage, or the thousands upon thousands of models it’s sold, but because this is one of the blades that elevated an entire generation of pocket knives.

If you’re getting ready to argue that the Benchmade 940 deserves first mention, don’t worry — we’ll get there soon enough. And this is a roster, not a ranking. But when I had the idea to revisit these knives, the PM2 ($171) was the first to pop into my head.

For the most part, I’d say the years have been kind to this one. The current base model offers CPM-S45VN steel to go along with the wonderfully flicky Compression Lock.

The graceful (if delicate) tip is still a thing of beauty, and the tallness of its 3.42-inch blade allows it to slice well in spite of its 0.145-inch thickness. The PM2 was never small, and its 3.9 ounces and 8.24-inch overall length ride just as heavily now as they did back in the day. And the high-riding pocket clip does it no favors in a pair of cargo shorts.

But as a solid, dependable cutting tool, the PM2 has proven its staying power.

What makes it less appealing now is the markup. Base-model prices have ballooned in the last few years, now starting at just over $170. Sure, the steel has been upgraded, but the design is otherwise unchanged.

If you’re having difficulty swallowing the PM2 pill (and can do without the flickable action), I’d encourage you to check out the Native 5 instead. It may not be as flashy, but it’s lighter, more practical, and arguably easier to carry. 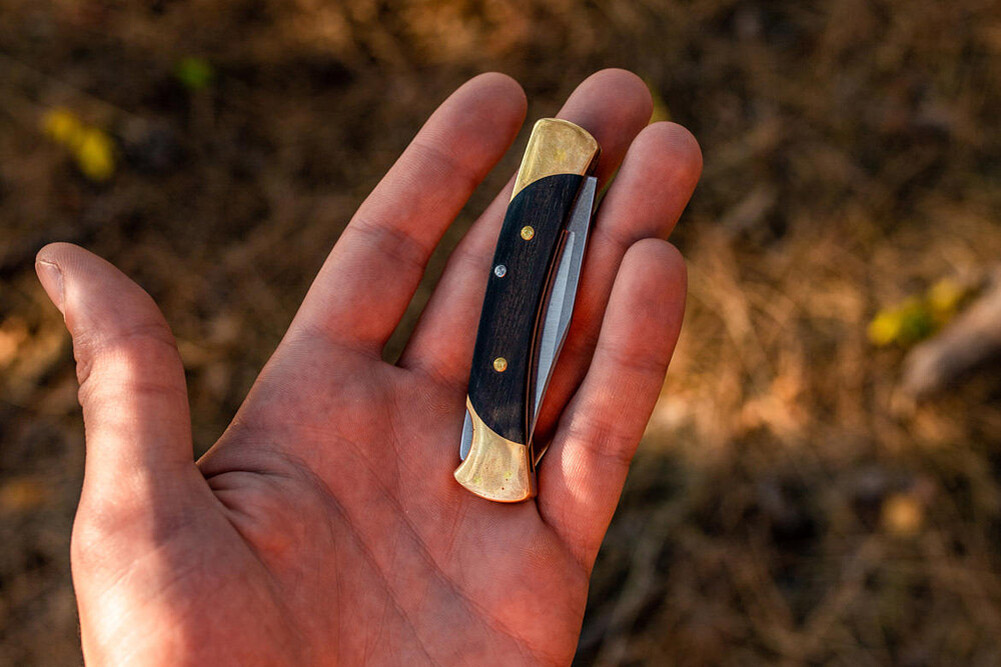 Bet you thought you’d see the Buck 110 here, didn’t you? Or even the 112, its abbreviated cousin? Nope, we’re going even smaller. And the reason for that is simple — neither of the larger pair is a pocket knife.

The manufacturer has as much as admitted this, shipping both the 112 and 110 with leather sheaths. But at just 1.9 ounces and 3.375 inches closed, the 055 ($60) practically disappears in the pocket. Its materials are no less solid: 420HC steel, brass bolsters, and ebony wood on the handle.

The back lock is more than robust enough to keep the 2.375-inch blade secure, and the USA-made heritage is a nice addition. The downside, perplexingly, is that it costs the same as the larger models. Boo, Buck.

Still, while it may not hold the same spot in the outdoor zeitgeist, it certainly takes up less space. If you’re OK paying for the tangential connection to the 110’s legacy, this remains a solid offering. 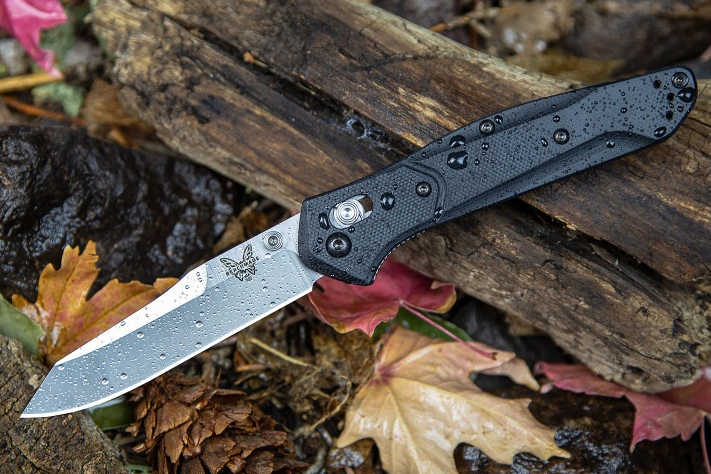 What can be written about the 940-2 ($189) that hasn’t been already? In print, video, and online type, this has been one of the most-recommended knives for decades. In its base incarnation, the Osborne features a 3.4-inch blade wrought in CPM-S30V steel. The reverse-tanto sculpting of its edge paints a signature silhouette, just ahead of the iconic AXIS lock.

These combine to create a knife that was a landmark of both slicing and fidget-ability, earning legions of devoted fans.

But, here’s the problem. While the design of the Osborne holds up, the price has spun wildly out of control. Even worse than the Paramilitary 2 listed above, retail costs for these Benchmades are now out of proportion with the amount of tool you’re getting, especially with the PM2 offering better steel for almost $20 less.

Yeah, it’s still a great piece. But at this point, you’re paying for the name and legacy more than anything else.

This is one might be something of a reach, but let me explain the thought process. For a while there, this Kershaw was a running contender for “Best Budget Pocket Knife.”

And guess what? At less than $40, the Atmos is still a screaming deal. The Dmitry Sinkevich design remains one of the most futuristic-looking options at this price point.

Its carbon fiber inlays and sleek blade profile are iconic, and the flipping action is just as good now as it was then. Add in a deep-carry clip and a curb weight of just 2 ounces, and it’s not hard to see why this knife was so beloved.

The glaring downside is, you guessed it, the utilization of 8Cr13MoV steel. I’ll say this — I’ve carried and used my Atmos at countless grilling and cooking outings over the years, and it’s never given me a problem.

While I’m definitely not a fan of its metallurgy, I have no significant complaints when it comes to the Atmos’ performance. Yeah, there are some spots of discoloration here and there, but nothing I’m troubled about.

Overall, I feel that this knife has held up remarkably well. The design, the action, and the materials have (mostly) stood the test of time. While I’m not a fan of most of what Kershaw’s putting out these days, the Atmos is a bona fide classic.

Speaking of budget icons, for a long time, this was it. With 3 inches of blade swinging from 4 inches of handle, no other knife defined the mid-2010s race to value like the RAT 2 ($41).

And I still use mine as part of an extended EDC kit in my backpack. Featuring brass washers, a comfortable nylon grip, and a smooth-running linerlock, this value proposition has managed to hold its own since its heyday.

Unlike the Kershaw listed above, Ontario was smart enough to upgrade its blade steel somewhere along the line. The original model came with just-OK AUS8, which was itself a step up from that darned 8Cr.

But somewhere along the line, the RAT got the bump to D2, which is now semi-standard in the budget field. The cost stayed close to its original territory as well, which lands it still in what I’d consider “recommended” territory. When it comes to high-value, low-cost tools, this RAT (sorry) still takes the cheese.

Up Next: EDC Under $80: A Full Kit With a Watch, Multitool, and More on a Budget

Saving…
EDC Under $80: A Full Kit With a Watch, Multitool, and More on a Budget
The ‘Very, Very’ Good Knife: Uinta Hunter V2 Fixed Blade Review
×