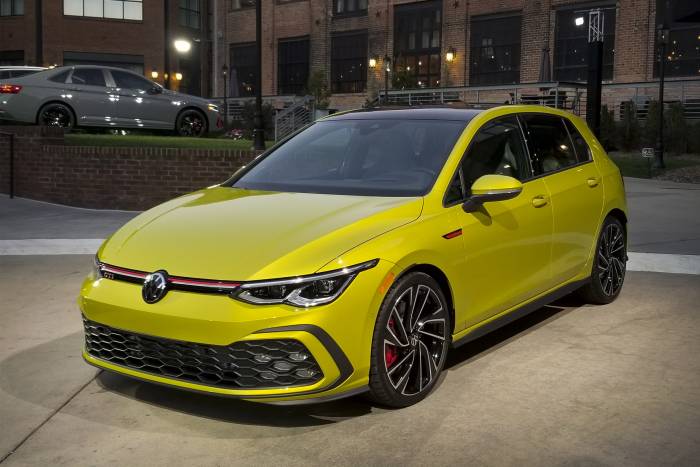 Hot hatches aren’t usually the fastest cars out there, but they can still be sporty, fun, and family-friendly. Here’s our list of North America’s best hot hatchbacks of all time.

The term “hot hatchback” or “hot hatch” refers to a spiced-up performance version of a hatchback car. Often they’re based on a smaller subcompact or compact economy car platform and cost less than a sports car.

Hot hatchbacks have a high fun-to-dollar ratio, maybe even the best of any car option out there. With the right combination of engine, transmission, suspension, and style, some manufacturers have turned dowdy economy cars into super-fun, performance-focused hot hatches.

Which automaker offered the first hot hatch? That is up for debate. Some might say it was the original Mini Cooper. Others would argue the Volkswagen Rabbit GTI was the first to use this formula. Regardless of which company did it first, hot hatches remain popular with driving enthusiasts around the world.

Here are our thoughts on the ten most beloved hot hatches ever sold new in North America. Yes, we know there were some really cool and truly special ones sold overseas, but we didn’t get them here — although some can now be imported if over 25 years old.

The 10 Best Hot Hatchbacks of All Time 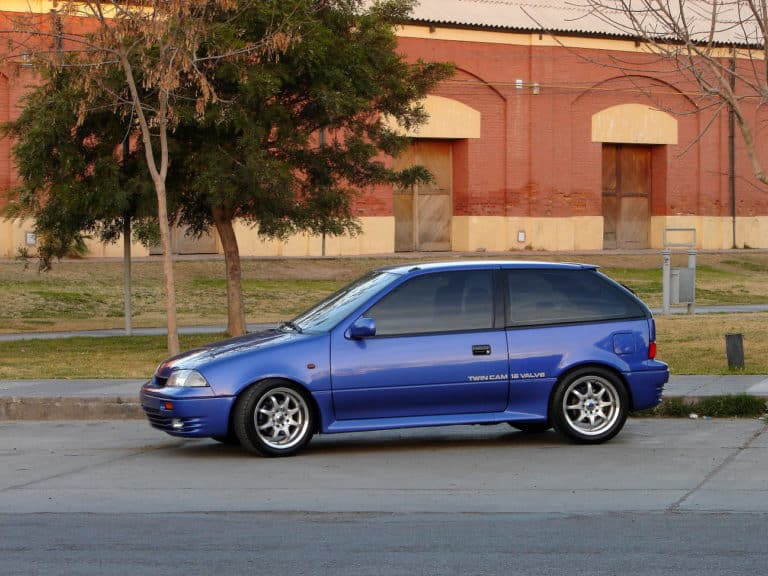 What looks like a Geo Metro, but is much sportier? The 1989-1994 Suzuki Swift GT. Suzuki first billed the car as the Swift GTi, but Volkswagen already used that moniker. It was then changed to GT.

The standard Suzuki Swift had a pedestrian 55 horsepower. The spunky Swift GT made 100 horsepower from a 1.3L 16-valve DOHC engine. That engine only needed to move about 1,900 pounds and was eager to perform.

These cars included sporty ground effects, sport seats, a taut suspension setup, and 175/60R14 tires with more grip. While Suzuki no longer sells cars in North America, the modern Swift continues to sell elsewhere in hot hatch guise. It is often a top pick among critics.

What GTO means to muscle cars is what GTI represents for the hot hatchback segment. Based on the original Volkswagen Rabbit platform, the 1983 GTI amped up the hatchback’s performance in North America.

It featured quick acceleration from its fuel-injected 90 horsepower 1.8L engine and excellent handling thanks to sway bars front and rear. It also had 29% stiffer springs and shocks compared to a regular Rabbit. The GTI rolled on 185/60R14 tires mounted on alloy wheels. Remember, this car only weighed 2,200 pounds.

With excellent driving dynamics, a tuned suspension, and European good looks, the Rabbit made its historical mark. It has a secure spot on our best hot hatchbacks list. 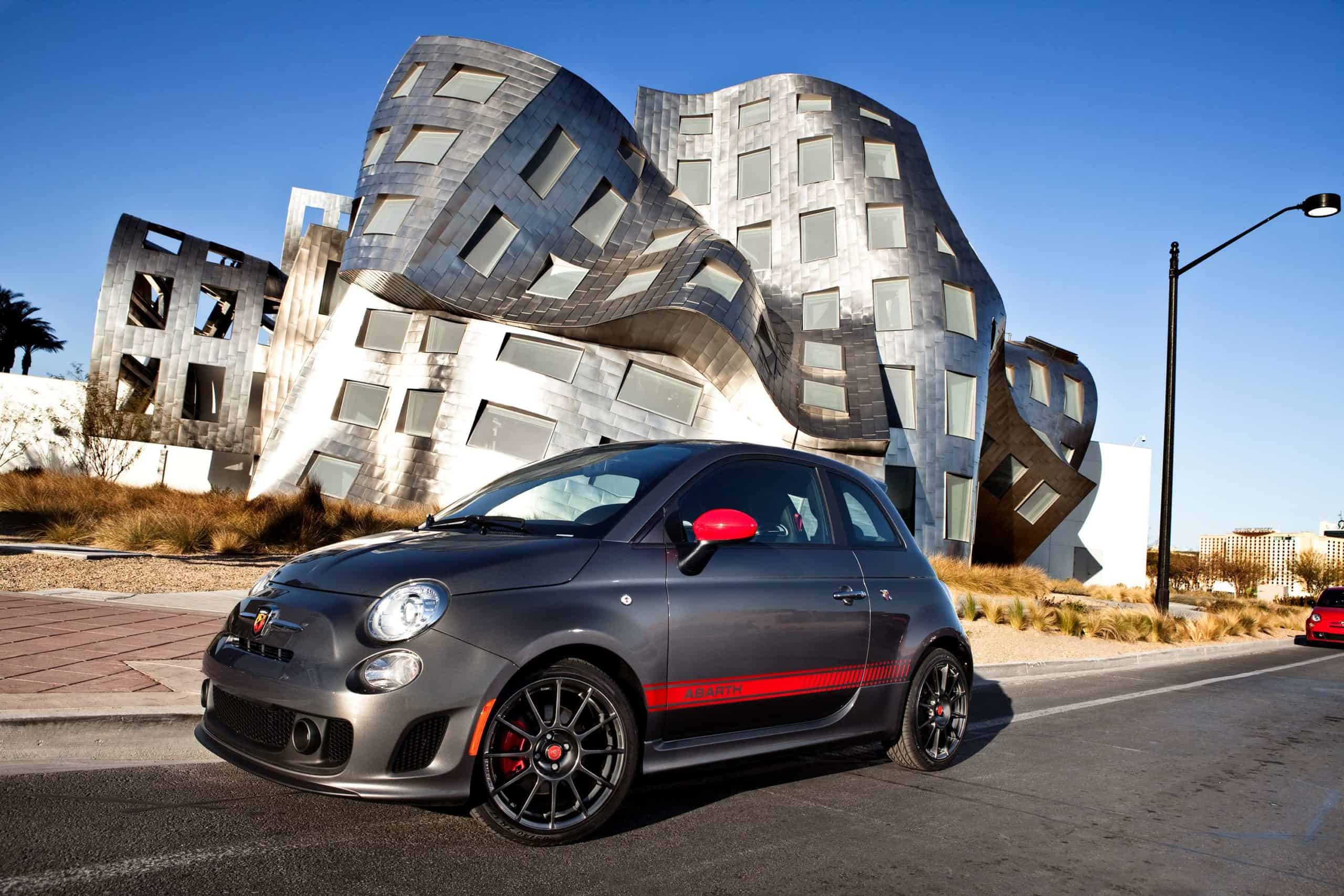 The Fiat 500 Abarth is a prime example of a modern hot hatch. This isn’t the cute little 101-horsepower Fiat 500. The Abarth model has 59 additional horsepower, a stiff suspension, and stickier tires. All of these things add up to a super fun-to-drive hot hatch.

A 1.4L turbocharged MultiAir engine produces 160 horsepower. As such, the 500 Abarth has one of the most recognizable exhaust notes of any car in the last 10 years, regardless of size and performance. At full throttle, the Abarth sounds like one angry Italian! Under throttle, a glorious, distinctive sound emanates from twin tips at the car’s rear.

It’s not the fastest, but its unique Italian shape, notable handling, and unmistakable exhaust note make the 500 Abarth a modern classic. 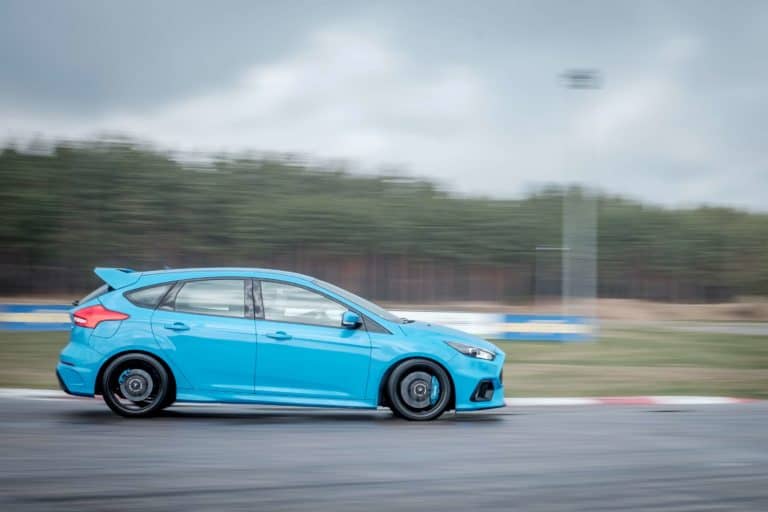 With all-wheel drive, big turbocharged power, and a rally racing pedigree, the Ford Focus RS is the top performer on this list. The car was sold in Europe for years, but North America didn’t get the model until 2016.

It features a fire-breathing 2.3L turbocharged engine putting 350 horsepower and 350 pound-feet of torque to all four wheels via a six-speed manual transmission. This allowed the car to go from 0-60 mph in about 4.5 seconds. It is a rally car for the streets!

Everything about this compact hatchback means performance, from the big 19-inch wheels and Brembo brakes to its swooping body kit and ability to go into “drift mode.”

Sadly, the Focus RS was discontinued for 2019 in North America, thus earning a spot in the hot hatch history books. 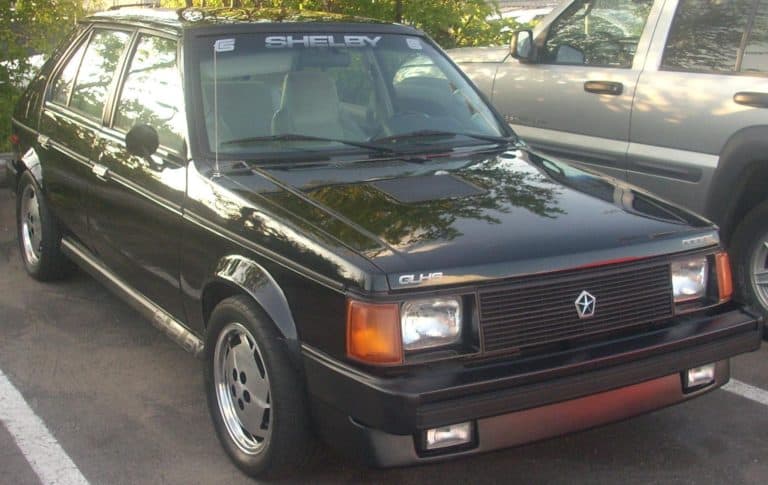 The Dodge Omni was honest-to-goodness 1980s transportation: simple, frugal, and versatile. Dodge offered a quick turbocharged version called the Omni GLH (which stood for Goes Like Hell). It made 146 horsepower versus a standard Omni’s 93 horsepower.

Then in 1986, Shelby Automobiles took the Omni GLH and made it even hotter. The resulting Shelby GHL-S (Goes Like Hell—S’more) may be the most iconic American sport-compact hot hatch in history.

Shelby tuned the 2.2L engine to produce 175 horsepower and 175 pound-feet of torque through a five-speed manual transmission. At the time, the car was faster than a V8-powered Chevrolet Camaro, Pontiac Firebird, and Ford Mustang.

Only 500 Shelby GLH-S examples were made, making it quite collectible among hot hatch fans. Its boxy shape and potent four-cylinder made it an overachieving underdog. 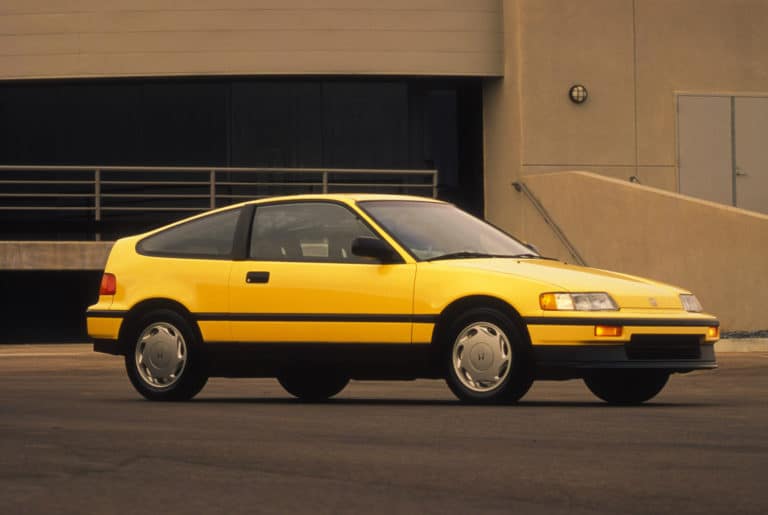 Few Hondas are as well-known and well-loved as the CRX. The distinctive-looking compact hatchback debuted in 1984 and was made until 1991. The hot hatch version would’ve been the CRX Si.

Horsepower ranged depending on what country you lived in, but North America’s sportiest engine was the 1.6L SOHC mill producing 108 horsepower. But with only about 2,100 pounds to haul around, the Honda CRX Si was a pocket rocket.

Its fully independent suspension was also willing to serve up fun in the corners, its strongest asset. Unlike all the other cars on this list, the CRX was a two-seater and was very low to the ground like a sports car.

The car was successful in road racing and popular with the tuner crowd. To this day, tuners swap in higher-performance engines from other Honda cars, making this iconic car much faster.

When the previously mentioned Volkswagen Rabbit GTI had a body style change in 1985, it became the Golf GTI. Ever since then, each Golf GTI iteration has been one of the top-performing front-wheel-drive cars anywhere.

The current seventh-generation GTI makes 228 horsepower through a turbocharged 2.0L four-cylinder engine and will go from 0 to 60 mph in a scant 5.7 seconds.

Like all good hot hatches, the suspension has been tuned for performance, and standard rolling stock is composed of 225/40R18 tires offering plenty of canyon-carving grip. The next-generation GTI will carry on the GTI tradition of being both a true driver’s car and a top-tier hot hatchback. 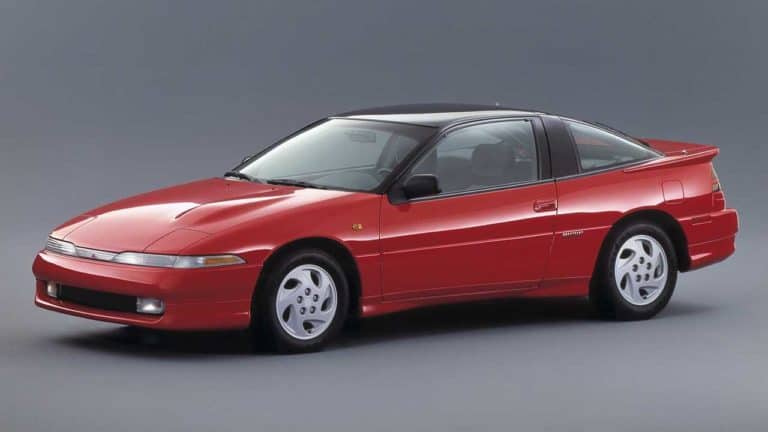 In 1990, Mitsubishi debuted its Eclipse for the U.S. Unlike many other hatchbacks of the time, which were squared off and boxy, the Eclipse and its mechanical twins, the Plymouth Laser and Eagle Talon, were round and aerodynamic.

The most high-performance model was the all-wheel-drive Eclipse GSX which employed a 2.0-liter engine making 195 horsepower. The Eclipse GS-T was a front-wheel-drive version and was still a solid performer.

No matter which model you chose, you were rewarded with excellent handling, fast acceleration, and futuristic styling. The Eclipse/Laser/Talon was popular with road racers and tuners alike. Some were able to make big power from the legendary turbocharged 4G63 engine.

While Mitsubishi cars are much different these days, the original Eclipse was one of the best hot hatchbacks ever. 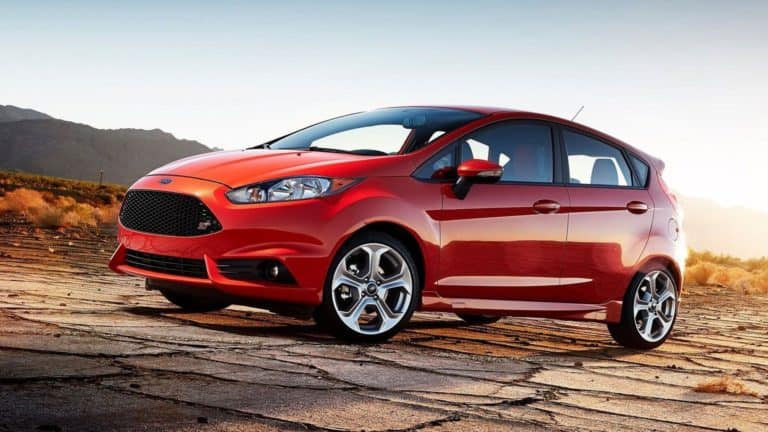 The Fiesta ST’s story is similar to the Focus RS’s, just on a smaller scale. The Fiesta ST, the Focus’s smaller cousin, had been available in other parts of the globe for years but didn’t come to North America until 2013.

This firecracker makes 197 turbocharged horsepower through a 1.6L engine. Power is put to the front wheels. Other hot hatch goodies include a limited-slip differential for handling, sporty bodywork, and Recaro seats with great bolstering.

The tiny Fiesta ST will run to 60 mph in under 7 seconds and offers some of the most fun in the modern subcompact segment. All of its parts come together to create a great driver’s car that’s also practical and frugal.

One could argue the Mini Cooper represents the original “Hot Hatch.” The Mini was first produced by the British Motor Corporation (BMC) in 1959. Some refer to it as the British version of Volkswagen’s Beetle.

The “Cooper” designate originated from racer John Cooper. The tarted-up Mini Cooper debuted in 1961. It weighed a scant 1,288 pounds and offered a bump in power from 34 to 55 horsepower, a close-ratio gearbox, and disc brakes. Over time, hotter versions showed up, such as the Mini Cooper S, which gained bigger engines, more performance, and more racing victories.

Speaking of races, Mini won the 1964, 1965, and 1967 Monte Carlo Rallies, cementing its reputation as a giant killer on the racetrack. These spitfires often outmaneuvered much more powerful cars, making the Mini marque a popular brand among racers, and a perpetual underdog.

There are some hot hatches in the current Mini lineup, but in my mind, nothing is cooler than an original Mini. It has to be number one on the best hot hatchbacks list for us. 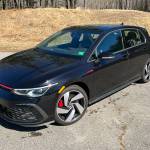 I Leased a Hot Hatch as My Family Hauler and Love It: 2022 VW GTI Review 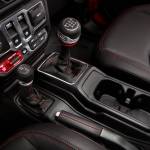