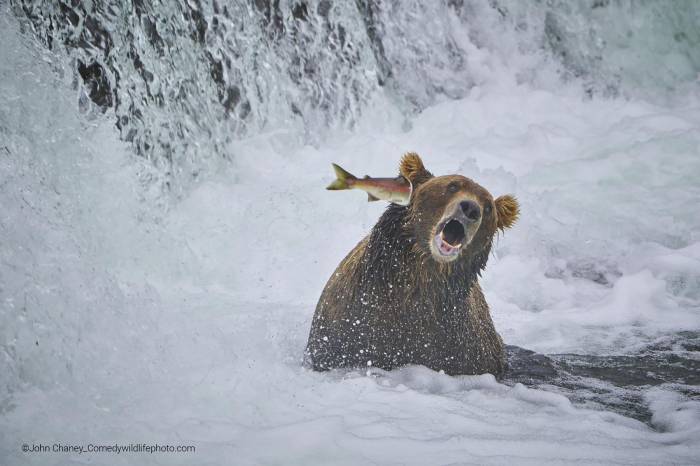 Feline miscalculation, a salmon mishap, and more — the yearly photography contest is a surefire way to brighten up the late fall doldrums.

If the ever-decreasing sunlight has you feeling down, we’ve got an antidote. This year’s Comedy Wildlife Photography Awards finalists just dropped, and they are sure to put a smile on your face. You can view a gallery with all the delightful finalists online, and trust us, it’s worth it!

Though the grand prize is up to the judges, there’s also a people’s choice award that allows you to select your personal favorite. And to sweeten the pot, voting signs you up for a randomly selected $580 cash prize.

My favorite is John Chaney’s shot of a bear getting absolutely decked in the face by a leaping salmon (above). I also enjoy Jennifer Hadley’s stellar example of poor feline trigonometry.

The Comedy Wildlife Photography Awards are a judged competition with six wildlife photography categories and a pretty nifty grand prize — a Kenyan Safari plus two high-end photography bags. Categories include an overall category, an underwater one, “creatures that fly,” and a kids’ competition.

This year’s panel of judges includes photographers Daisy Gilardini and Tim Laman, as well as media personalities Kate Humble and Russell Kane. Contestants may enter up to three photographs per category (no more than 10 photographs total).

A History of Humor

Wildlife photographer Paul Joynson-Hicks started the Comedy Wildlife Photography Awards in 2015 from a tiny office in Northern Tanzania, Africa. The contest has grown considerably since then, with photographers submitting thousands of hilarious shots from around the world annually.

Every year, the organization donates 10% of its net revenue to a conservation organization. This year’s partner is the Whitley Fund for Nature, a U.K.-based charity that is active in the global south.

Voting for the people’s choice award closes on November 27, so be sure to check out the gallery and vote before then. Winning photographers and images will be announced on December 8.

Oh, and don’t forget to check out the finalists from previous years! 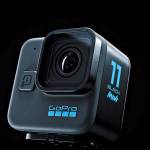 GoPro introduced the brand new HERO11 Black and then sought to make a smaller version of it that's just as good. Read more…