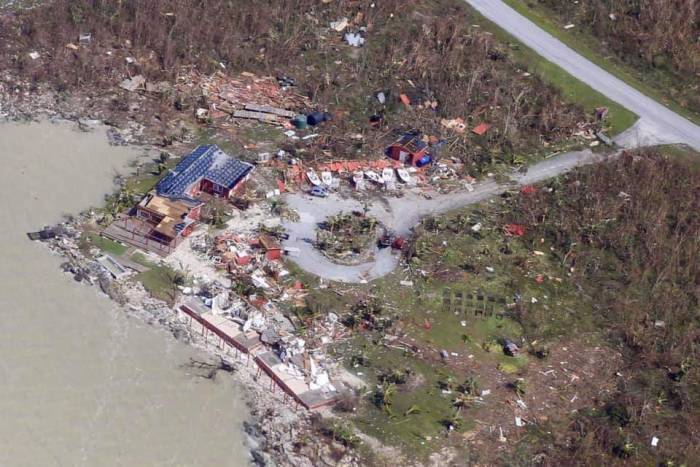 In an effort to raise money for the hurricane-devastated Bahamian community, anglers are rallying in a variety of ways to raise on-the-ground funds. And the effort is spreading quickly.

The Bahamas is an angler’s paradise, a bucket-list destination for those who love to cast a line for bonefish and tarpon. And many serious anglers have spent time with Bahamian guides and hosts, earning the island nation a huge soft spot in hearts of fishers around the world.

Watching the destruction of this beautiful place by Hurricane Dorian has been heart-wrenching. And now the fishing community wants to do something about it.

A Focus on ‘Immediate Needs of the Locals’

The angling community’s response to the vast devastation of the Bahamas has been both swift and dynamic. With confusion about who to donate to and where the money is directly going, Yellow Dog Flyfishing Adventures stepped in with their 501c3 and created an action alert. The Double Haul For Dorian effort will directly fund the communities they work within the Bahamian islands.

“The Yellow Dog Community and Conservation Foundation works globally, utilizing contacts on the ground to find out what our angling communities on the ground need,” Bryan Gregson of Yellow Dog Fly Fishing said.

“We’re investing in the direct and immediate needs of the locals, whether it’s a crib for an infant or an oven for the local breadmaker. The lodges have insurance; they’ll be rebuilt. It’s the community that needs this funding to rebuild their lives.”

Thus far, the YDCFF’s Double Haul for Dorian effort has raised more than than $66,000 in just the past few days. The total amount increased $4,000 since I wrote the first sentence of this piece, and the money continues to come in. But, according to Gregson, this is going to be a long-term effort, with Bahamians likely being out of work for months to come.

“What we’re trying to do is create a central place for everyone in the industry, and efforts are already in motion,” YCCCF Director Dillon Gruber said.

“We’re organizing charter flights to Grand Bahama that will have supplies for families, satellite phones, and cooking stoves. These are immediate results from the funds happening right now.” YDCCF also plans to have an ongoing newsfeed on the people and efforts as they put the money into action.

Not everyone has thousands of dollars to donate directly to the fund. But anglers are getting creative in figuring out ways to give back. Ben Bullis of the American Fly Fishing Trade Association

And if you’d like to pitch in, here are the three main ways anglers are stepping up to the plate.

Fly-tiers are uniting under the hashtag #DozenForDorian. The gist is this: Tie a dozen flies, then auction them off via social media. This idea was born from the mind of the fly-tier, angler, and avid conservationist Josh Mills.

“Most of us have never been to the Bahamas, including me,” Mills said, “but it’s a real-time effort to help these people that are literally a world away.” The idea came to him while he was driving, and he immediately jumped on social media and phone calls to spread the word. An influential fly-tier that goes by the handle @FlyFishFood coined the hashtag, and a movement was created.

“So far, we’ve raised over $5,000 just by individually auctioning off 12 flies,” Mills said. “Twenty-four anglers have already committed to the project, and my heart is full seeing so many people proactively lend their skills to this effort.” And the hashtag continues to grow.

Check out the hashtag and either auction off your own flies or bid on flies here.

Fishing guides around the world are figuring out creative ways to give through their guiding effort. Groups of guides are pooling their tips from an entire week to donate to the cause. Other guides are in the process of creating a Day for Dorian. All proceeds of their guided days on the water will go back to the effort.

“Not everyone can donate money, but so many people in the angling industry can donate time and talent,” Gregson said.

Guides interested in donating tips or time on the water can donate here.

Of course, you can also donate money directly to the fund and know that it’s going directly to the angling community. And donations to the YDCCF are 100 percent tax-deductible.

In the midst of the devastation, there are plenty of ways to give back. But, for the angling community specifically, the Double Haul for Dorian effort is one to pay attention to throughout the rebuilding of the Bahamian community.

Gregson was sure to tell me anglers understand that the adventures and experiences they have in the Bahamas (and beyond) exist entirely because of the community of people that live, work, and breathe angling. And AFFTA President Ben Bullis added this important call to action to all anglers:

“There is a long way to go before we learn the true toll Dorian has taken, but the fly fishing industry is already mobilizing to do everything we can to help them recover. Double Haul for Dorian Relief is a vital humanitarian effort and we need everyone’s help.