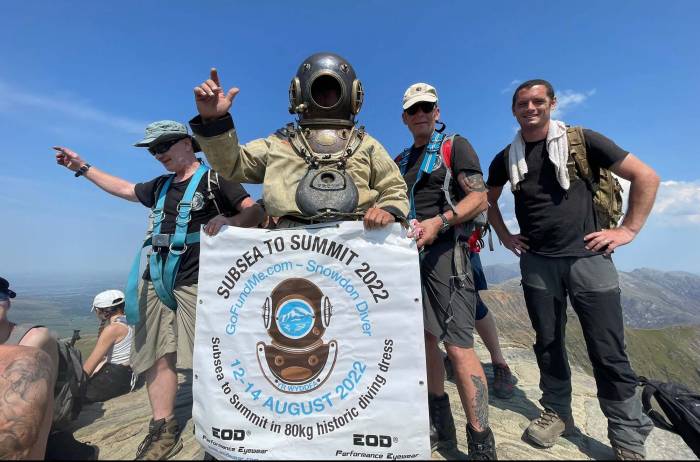 A group of volunteers hiked in a vintage diving suit for charity this weekend; (photo/Ty Burton)

To raise money for a sick little girl and The Historical Diving Society, a team of volunteers hiked up Wales’ Snowdon Mountain … in a 180-pound diving suit.

Many fundraisers combine unique goals to get attention — but few are as grueling as this. A team of fundraisers spent last weekend hiking up Wales’ Snowdon Mountain while wearing old-school diving equipment weighing about 180 pounds.

Called the Subsea to Summit challenge, the effort began with a dive at Llyn Padarn. Next, the volunteers spent 3 days hiking up Snowdon wearing the vintage diving suit — as temperatures rose to over 90 degrees.

So far, the charity effort raised nearly $5,000 on GoFundMe for three causes. They include the purchase of hearing equipment for a 3-year-old deaf child, Cadi Owen Evans from Llanberis, Wales. Donations will also be used to fund Llanberis Mountain Rescue and The Historical Diving Society.

The lead organizer, Ty Burton, invented the Subsea to Summit challenge while chatting with Ginge Fullen, a British mountaineer and diver who holds the Guinness World Record for the fastest climbs of every peak in Europe and Africa.

Together, they came up with a truly grueling challenge.

“At one point we were pouring water on the helmet to help cool it down and we could see the water evaporating in front of us, that’s how hot it was,” Burton told The Daily Post.

Difficult, but Worth Repeating

Burton said that completing the Subsea to Summit challenge involves a team of six people working in a relay.

The diving suit is so heavy that walking with it requires the aid of two other people wearing harnesses. Members of the group took turns wearing it while hiking up Snowdon’s 3,560 feet of elevation gain.

Burton’s biggest problem with the hike was dealing with the diving suit’s awkward boots. The boots have lead and wooden flat soles with no flexibility and are attached to the ankle with rope.

“It’s very difficult going up uneven steps/stones as you can’t really look down at your feet or you will fall over with the weight of the helmet (56 lbs.) and the front and back weights (40 lbs. x 2),” Burton wrote in an email.

For many people, finishing such a difficult challenge one time would be enough — but not Burton. He’s already planning the next one for 2023.

“As far as doing it again … I personally am looking forward to it,” Burton said.

You can still support the Subsea to Summit team and little Cadi’s medical bills at the Snowdon Diver GoFundMe. 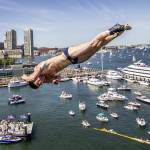 Take Olympic-level diving and multiply that by three — that's the extreme nature of the Red Bull Cliff Diving Series. Watch the only North American stop in the competition this weekend. Read more…