Free energy from the wind is captured and converted to electricity with these portable turbines. Bring one backpacking, or install a larger unit at a base camp to power the grid for a larger group. 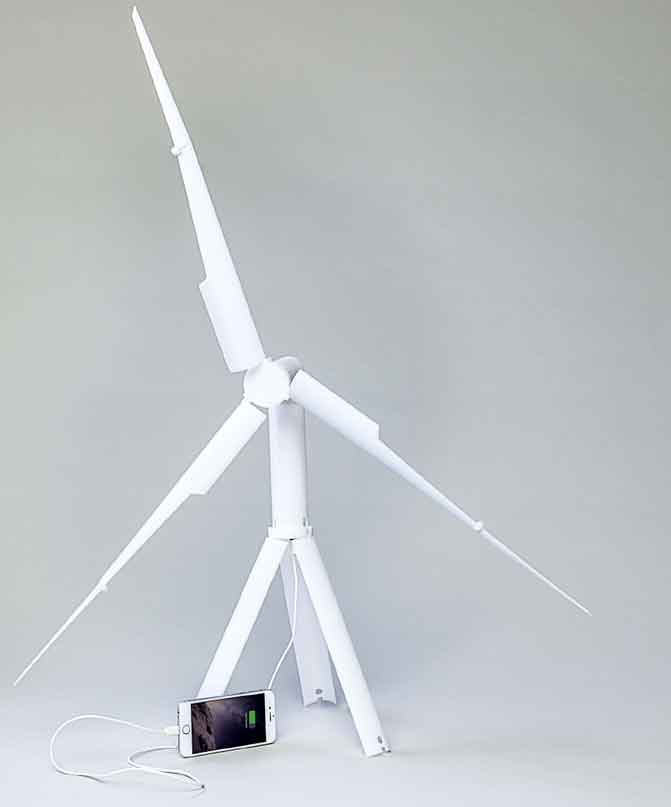 We covered Minnesota-based Skajaquoda a year ago when it launched a portable wind generator product that weighed 4 pounds and packed up small enough to take on a wilderness trip.

The company is back with an improved unit, the Trinity Portable Wind Turbine Power Station. It looks like a mini windmill but folds up to pack small like the original design.

Like a portable solar panel, the Trinity units harness the elements to create electricity anywhere. You plug in a device to recharge from the unit’s internal li-ion battery pack.

Unlike solar, a turbine can be used at night or in low light. A USB port on one end gives compatibility to recharge phones, cameras, GPS units, and other products.

The company notes the turbine is capable of generating up to 2.5 watts in as low as 4mph wind. The smallest unit weighs 1.4 lbs and starts at $369.

Skajaquoda makes bigger turbines, too, and the company touts you can power a home or an RV off the wind.

Another unique idea: Put a turbine in the trunk of an electric vehicle and you’ll be able to stop and “refuel” far from any charging station.

That’s the theory, at least. We’re guessing it would take quite the wind and a long time to charge anything major like a car.

But Skajaquoda has a great concept with its Trinity line, and we’re glad to see another clean power option enter the market for the outdoors as well as use in general life.

–Check out the company’s Kickstarter page for more info.