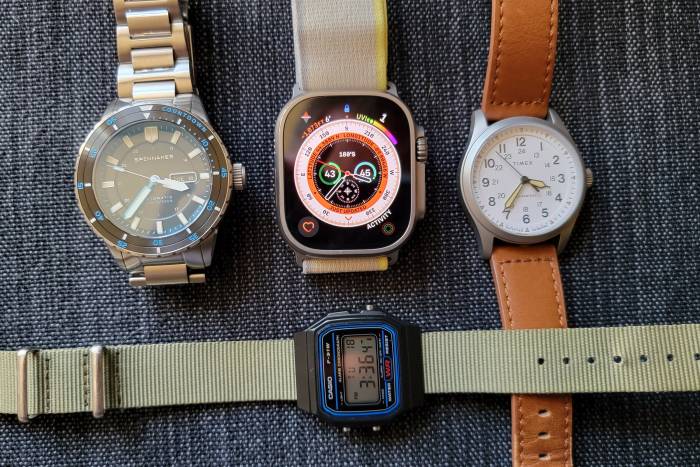 How many ways are there to tell the time? From sundials to atomic clocks and the screens of computers and cellphones, there are more methods than hours in the day. And the simple wristwatch, while not as popular as it once was, is one of the most accessible, long-standing options.

But here’s the thing — choosing the right timepiece can be tricky. Just type “wristwatch” into Amazon, and you’re left with more than 30,000 results. Physical shopping is even less helpful, as most big box stores have all but eliminated their jewelry counters. And dedicated jewelry retailers seem to carry the same six or so brands, all at incredible costs.

Take a deep breath and count to five, because GearJunkie is here to help. I see a lot of wrist candy, and I’ve picked up a few tricks when it comes to selecting the best options.

Below, you’ll find a list of helpful terms and an explanation of how they relate to your needs. Now, I’m not going to cover smartwatches here. That’s an entirely different topic and, if you’re interested, check out GearJunkie’s list of the best fitness watches.

But from Arnie to Zodiac, we’ve got you covered.

Shopping for Your First Watch: Set Your Price Point

A $15 Casio F-91W will tell the time every bit as well as a $10,000 Rolex. Sure, there are huge differences in prestige, craftsmanship, and the way the seconds tick by, but try to keep the end function in mind.

In general, I’d advise new buyers to spend less than $300 on their first timepiece. And even this number is decidedly on the high side.

Thanks to the beauty of electronic quartz movements, you can snag a solid dive watch, field watch, chronograph, or bombproof digital for well under $100.

Still, this doesn’t mean limiting yourself to quartz. Companies like Orient (a sister brand to Seiko), Timex, and Island Watch all produce quality mechanical timepieces at genuinely affordable prices.

Check out our reviews of the Timex Expedition North Field Post, for example, or the gorgeous ISL-88 at the tippy top of the recommended price range.

Diagram of a Watch

This is a (very) basic diagram to illustrate the parts of a wristwatch. We’ll be dealing with some terms, so refer to it to help understand how it all fits together.

Perhaps we’re getting ahead of ourselves. Quartz? Mechanical? What’s the difference, and why does it matter?

The simple version is this: Movement refers to the internal assembly of the watch, the tiny machine that tells time. Quartz watches accomplish this by sending an electric current through a small crystal, causing a predictable oscillation (32,768 times per second).

The movement counts these oscillations and translates them into the tick of the second, minute, and hour hands. Though the charge usually comes from a battery, some watches utilize solar cells.

Mechanicals, on the other hand, utilize springs, gears, and wheels to measure the passage of time. This technology has been around for centuries, to the point where it’s become something of an art form. And while mechanical watches tend to be less accurate than quartz, they require no electricity.

Instead, their power comes from either winding the watch’s crown or via an internal counterweight that swings with the natural motion of your arm. This last type is where the term automatic comes in, though many watches utilize both types of winding.

A last bit of jargon to consider is hacking. In simple terms, this deals with a movement’s ability to halt the second hand once the crown is pulled into the time-setting position. While quartz watches almost universally hack, the same isn’t true for mechanicals. And speaking of different ways of dealing with seconds …

This is an easy one. An analog watch uses hands (usually three) to indicate the passage of hours, minutes, and seconds, while its digitals rely on electric numerals.

Both versions have their advantages. Digitals are generally easier to read at a glance and offer extra functions like timers, alarms, stopwatches, and other tricks.

But depending on the watch, there’s generally not as much room for adornment or style. Analog faces tend to be brighter, more colorful, and utilize dots of applied paint (called “lume”) to increase their visibility at night.

Digitals are often equipped with a backlight, requiring the press of a button to shine.

There are also a few watches that manage to cross the streams, like the Seiko SNJ025 “Arnie” mentioned above, or the Casio Tough Solar. These are really interesting pieces, offering the best of both worlds for quartz lovers.

I probably don’t need to explain that first term, but I will. You know, just in case.

Puns aside, it’s the housing for the movement and power source. They come in a wide range of materials, from steel to titanium, aluminum, and the entire family tree of plastics. Heck, there are multiple companies making cases out of recycled ocean-bound plastic, which is as commendable as it is neat.

But when we refer to a watch’s crystal, we’re not talking about that little piece of inner quartz. Instead, this is the clear material that covers the face. Acrylic, mineral glass, and sapphire are the most popular mediums, listed in ascending order of hardness.

Band or strap can generally be used interchangeably. These are usually composed of plastic, leather, or some kind of fabric (often nylon), though bracelets are usually some type of metal.

Here’s where your personal preference and use case comes into play. Steel and plastic are water-resistant and easier to clean, while fabrics and leather tend to be more supple.

But the good news is that watch bands are generally fairly easy to swap out, so there’s nothing stopping you from alternating between a thick rubber band and a NATO strap, so long as you have a spring bar tool.

Water Resistance and Other Factors

Mechanical or quartz, water is the enemy of watches. And for the sake of simplicity, I’ll boil it down to four tiers. First is anything under 50 m (also known as 5 atmospheres or 5 bar).

These are timepieces to avoid, as even a simple submersion could damage the mechanism. At 50 m or above, you’re generally good for showering or even a brief dip in the pool.

A great everyday rating is 100 m. Watches with this level of resistance can endure snorkeling or other water activities and will shrug off most ordinary moisture. And once things reach 200 m or above, you’re into the field of dive watches. Here, you can more or less stop worrying about water.

Dive watches also come with a bezel, which can be used to compute basic directions and math. They’re not essential for time-telling purposes, but hey — it’s a nice additional feature to have.

Last but not least are shock and magnetic resistance. If you work in construction, say, or around banks of heavy machinery, you may want to look into models that incorporate additional protections into the mechanism.

The Victorinox INOX is a gold standard for analog toughness, and Casio’s G-Shock lineup (both digital and otherwise) is second to none.

So, that’s the main roster of terms. Now that you’re armed with some knowledge, it’s time to consider your needs. Do you spend a lot of time in the water? What about dirt, mud, or low-light situations? For each of these situations, there’s a watch that’s more than up to the task.

In fact, there are probably dozens, which is why it’s nice to start at the budget-friendly end of the range. Don’t like that $40 Casio? Pick up a digital alternative for the same price or less!

And with the wide availability of NATO and rubber straps, you can buy multiple retention methods or color choices.

Whatever you choose, whatever your preference, there’s really no wrong way to enjoy this simple, time-telling bit of tech.

If there’s any bit of negative advice, I’d suggest that folks steer clear of watches made by clothing or fashion companies. These are often sold largely on the strength of the brand name, with cheaper components and build quality than an equivalent Timex or Citizen.

In the meantime, check out a few of GearJunkie’s guides to help you make your decision, such as our list of the best field watches or five lightweight bargains under $50. 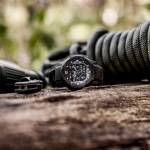 Garmin's new Instinct Crossover combines the styling of a sporty analog with the features of an adventure smartwatch. Read more…