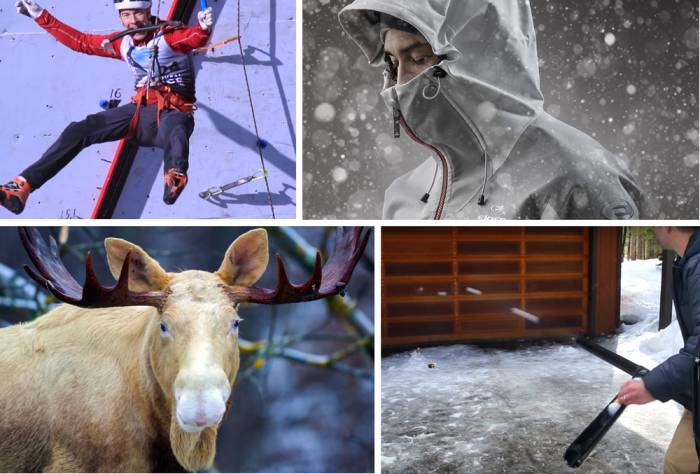 If you own carabiners or runners manufactured by Black Diamond in the last year or two, this recall likely affects you.

The Fix A Zip zipper forms around the face for a comfortable closure. It comes to market first in the Shaper Jacket from Eider.

The world has changed for pro and amateur videographers—with the whirring blades of a drone signifying a new era. Here we review the Chroma, a solid mid-level drone option.

4) Eagles Trained To Take Down Drones

‘Guards From Above’ is a new service using birds of prey that, in the company’s words, ‘intercept hostile drones.’

Filmed in Sweden over two years, this rare white moose video is something few people will see with their own eyes.

The Minipresso is a human-powered machine that makes delicious espresso anywhere. We put it to the caffeinated test winter camping and hiking far from civilization.

He drives a junker ’91 Toyota purchased with a six-pack of beer, but this 22-year-old is simultaneously aiming for the Olympics and an Ivy League degree.

The ‘Centriphone’ technique attaches an iPhone to strings, which the user then spins around himself while the camera records.

10)‘Survival Jacket’ For Those Who Expect The Worst

If your next adventure requires this jacket, you may want to reconsider your plans. But when it all hits the fan, the Condition Black survival jacket has you covered.

The Boundary 100 ski from G3 is a versatile touring ski light enough to climb fast. But does it have enough beef to really charge downhill?

GearJunkie partnered with QBP to custom-build a perfect winter bike for urban riders.

Pushing the limits of fat biking, the team from Rocky Mountain Bicycles forged into the backcountry to rip some epic pow lines in their new film 2 Fat 2 Furious.

Thirty-three climbers from around the world competed in the 2016 Ouray Ice Festival. Only one made it to the top. This video highlights the power, skill, and sketchy nature of mixed ice climbing.

15) Moto-SUP: Jet Propulsion Motor In Your Board

The internal electric motor of this SUP can push at up to 3.5 knots and it assists inflation for setup.

An international ‘congress’ about biking in the winter? Yep, it started this week in Minneapolis, and GearJunkie is live at the event.

This DIY, gas-powered thrower shoots 13 snowballs in half a second!

Follow along as Mike Douglas and Alexis Godbout tour through Switzerland’s Urner Alps to explore a beautiful mountain range on skis.

In the 12th running of what has been cited as one of ‘The World’s Toughest Endurance Challenges’, moderate temps created a different set of problems for Arrowhead Ultra racers than in past years—wet clothes and soft snow made for a challenging race.

Live video on social media while you ski? The GoPro Hero 4 can now broadcast directly to Periscope for iPhone via Wi-Fi.

Fat biking to climbing a major mountain peak… the ‘Road To OR’ video highlights a 1,200-mile road trip from GearJunkie headquarters to the Outdoor Retailer show in Salt Lake City last month.

GetOutfitted is a gear-rental company that ships direct to your home. Starting today, the company has retro options.