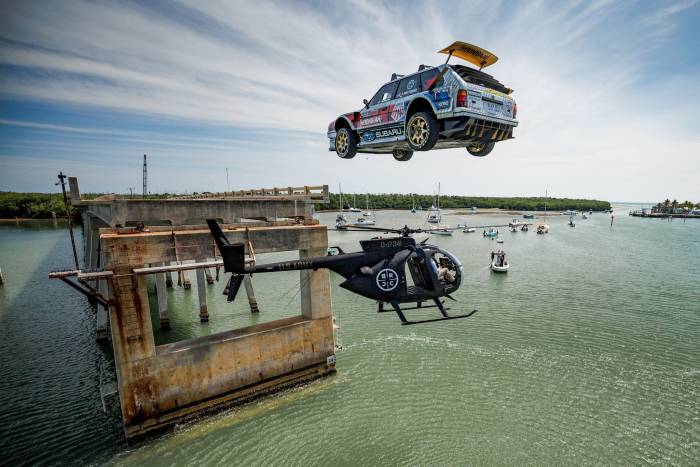 Every year, the Hoonigan team manages to produce an amazing stunt video. They’re at it again with ‘Gymkhana 2022.’

We’re not sure how, but every year the Hoonigan team manages to outdo itself with the Gymkhana series of videos. With Travis Pastrana behind the wheel for the second time, now in the Family Huckster, the rally and drift-stunt series promises to do it again. With, of course, a little help from some friends.

The “Gymkhana” series goes back more than a decade to when Ken Block hopped behind the wheel of his rally-prepped 2006 Subaru WRX STI. That video was mindblowing 14 years ago, and Block didn’t even leave the airport facility where filming started. He treated us to donuts in a hangar, some runway drifting, and fun between some plastic barriers.

Since then, Block has been to France, Hollywood, San Francisco, and Dubai. He’s done drifts around buildings, slid over city streets, and made his cars dance. And all this is with ever-increasing levels of amazing props, including an excavator lifting itself into the air, a slide under a hopping lo-rider, and skids behind a running 747.

The Hoonigan “Gymkhana” fleet has been amazing, with Subarus, Ford Fiesta STs, and both Block’s custom Ford Mustang and vintage-looking Hoonitruck.

Is This the ‘Wildest’ Gymkhana Yet?

When Travis Pastrana took over from Block in 2020, the series didn’t take a break. No, instead the extreme athlete jumped over a river and tore up an entire town in a fully custom, 862-horsepower Subaru STI.

What’s on deck this time? “‘Gymkhana 2022’ is the wildest film I have done on four wheels. Period,” said Pastrana.

Racing a fighter jet? Not enough. Doing donuts around a Monster Jam truck mid-wheelie? OK, maybe that’s something. Add in skimming over a 6-foot-deep pond and a tandem slide with a helicopter, and now you’ve got a movie! Pastrana does all of the above in “Gymkhana 2022.”

He’ll be driving the 1983 Subaru GL wagon known as the Family Huckster. There’s very little original Subaru left in this one. It’s got a carbon fiber body, long-travel rally suspension, and even a carbon fiber roof rack that is actually functional — not as a rack but to direct cool air to the rear-mounted radiator.

For more about that wagon and its U.S. Ski Team-inspired paintwork, check out our coverage of its debut or watch this:

The list of cameos is almost as impressive as the list of stunts. Monster Jam star Ryan Anderson shows up. YouTuber Cleetus McFarland is along for the ride, too, with his 3,000-horsepower El Camino. It also has Jim York from Pit Viper Sunglasses on an extremely Florida vehicle.

Director and Hoonigan co-founder Brian Scotto had this to say about “Gymkhana 2022”: “Travis stepped up big time for this film, really improving his driving style and proximity control. But what makes ‘Gymkhana 2022’ stand apart is Travis’ flat-out, just-ain’t-care approach that created some truly unforgettable, and downright sketchy, moments for this film.”

Links to the full catalog of Hoonigan’s “Gymkhana” series are available on YouTube. 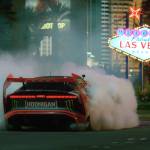