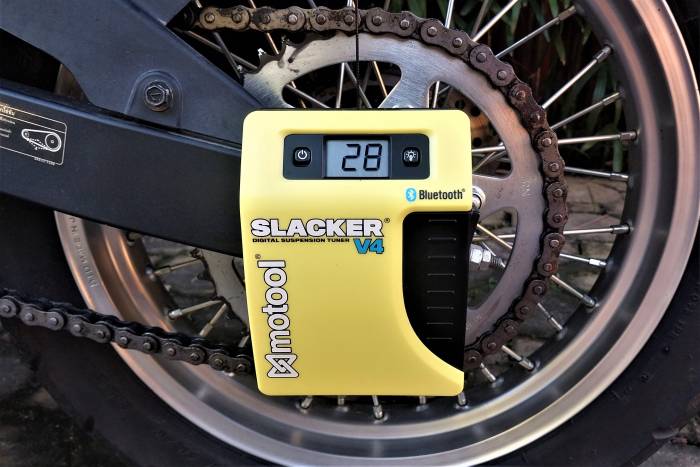 Suspension sag is critical for a motorcycle’s balance and handling — a task often neglected because it’s usually a two-person job. With Motool’s Slacker V4 Digital Suspension Tuner, riders can adjust their sag in one simple, super-quick, solo procedure.

Anyone who has ever tinkered with suspension knows that measuring the sag is a two-person job. It entails the rider in full gear sitting on the bike with someone else measuring how much the suspension compresses or sags under the rider’s weight.

When John Casebeer, the founder of Motool, began tuning his motocross bike’s suspension, he couldn’t find an easy-to-use sag-measuring tool on the market. Having an assistant with a measuring tape on standby was impractical as the tuning job required numerous adjustments.

In short: Over 2 months, I measured and set the suspension sag on a dozen bikes. That would’ve normally taken two people several hours with a measuring tape. Using the Slacker V4 Digital Suspension Tuner, I managed to do it alone in a fraction of that time. It’s an easy-to-use, high-quality device that has become an indispensable part of my tool kit. I just wish it was a tad smaller.

Setting the suspension sag is an often-overlooked aspect. Failing to dial in the suspension correctly can seriously compromise a bike’s front-to-rear balance and stability. Even when dialed in, it’s not a case of “set it and forget it.”

The hassle is having to adjust the sag each time the payload changes, with a passenger, for example, or luggage. The suspension also “breaks in,” as springs and valving components “wear in” and settle. As we often have nobody to help with measuring, we simply skip adjusting the spring preload to the payload, jeopardizing handling and, thus, safety.

Adding or subtracting a few millimeters in preload settings can make a noticeable difference in a bike’s handling. These incremental changes subtly alter the bike’s geometry, affecting the balance and handling. That’s why racers and their teams spend so much attention on optimizing the suspension set-up.

Races and championships are won or lost due to suspension performance. Given its importance, it’s surprising that motorcycle dealers often omit to set the sag upon delivery.

The Slacker V4 can be bought as a stand-alone unit; however, mine came as part of the Motool Ultimate Tuning Kit. This is the most comprehensive of the three kits that Motool offers: Ultimate, Premium, and Starter Tuning Kits.

A wireless remote also comes with the Ultimate Tuning Kit. After pairing the remote with the Tuner via Bluetooth, their digital displays simultaneously show the sag measurement value. It’s this feature that enables us to measure the rider sag by ourselves while seated on the bike.

The Slacker V4 Tuner, combined with the wireless remote or the Service Assistant Smartphone app (which we’ll talk about below), allows us to make quick and accurate adjustments on the fly.

The V4 Tuner’s main reason for existence is to streamline a cumbersome two-person job to a super-efficient single-person job. Relying on someone using a measuring tape — the old-school method — is anything but user-friendly. Apart from requiring an assistant, it’s slow and prone to human error.

Thanks to Motool, we can now easily tune our suspension ourselves. There’s no reason to ride with an incorrectly-set suspension just because there’s no one around to assist us.

We’re mainly concerned with measuring the rider sag since we can set it by adjusting the spring preload on the shock absorber and the fork legs, if available.

Rider sag, aka race sag, is how much the suspension compresses under the payload. This is the weight of the rider and passenger wearing all their protective gear, and the luggage.

Touring and adventure motorcycles especially require regular sag adjustments. Their payloads tend to vary frequently, as they change from riding solo or with a passenger and/or luggage.

As a rule of thumb, rider sag is set at about 30% of the available suspension travel, as stated in the bike’s technical specifications. This percentage is an average. It may vary between front and rear suspension depending on the type of motorcycle.

For street bikes, the recommended sag for both the fork and shock ranges from 28% to 33% of available front and rear travel.

For off-road motorcycles, the sag percentage differs between the front and rear. The recommended fork sag ranges from 25% to 28% of front travel, while for the shock, it ranges from 30% to 33% of rear travel.

Commonly, OEM suspensions are often undersprung. Meaning, too soft for our weight, resulting in excessive sag. By increasing the spring preload, we can usually restore rider sag to 30% of the suspension travel, which is recommended for dual-sport/adventure bikes.

After adjusting the preload to compensate for the payload, we need to measure rider sag again to ensure that it is indeed 30% of suspension travel. If our measurement deviates from this number, we have to repeat the process of adjusting and measuring until the sag is on target.

Once the rider sag is set correctly, we need to measure the static sag, aka free sag. That’s the sag of the suspension compressed under the bike’s own weight and without the payload. It’s measured as the difference in the length of the suspension between the bike resting on its wheels and propped up with wheels off the ground and fully extended springs.

If the static sag deviates from this value, our suspension doesn’t have the correct spring rate for counterbalancing the payload. We should replace the spring(s) in this case.

What Are Spring Rates?

In the trade, spring rates are commonly expressed as a value of K. For example, a spring rate of 8K means 8 kg/mm. This means that a weight of 8 kg compresses the spring by 1 mm.

Motorcycle suspension is commonly fitted with progressive coil springs with a variable spring rate. Progressive springs are easily recognized. There is spacing between the active coils varied over the length of the spring. Their initial spring rate is soft, but they become increasingly stiffer the more they are compressed.

For example, the spring of a WP shock (KTM-owned suspension brand) may be marked with WP 71-90/260. This indicates a progressive spring with a variable spring rate ranging from 7.1 kg/mm to 9.0 kg/mm and a spring length of 260 mm.

So, the spring sags about 10 mm under a rider weighing 80 kg.

Measuring the sag with the Motool Slacker V4 Digital Suspension Tuner is a straightforward, simple procedure that involves only a few steps.

This is the same as with ADV bikes. But instead of sticking an adhesive loop above the axle, screw the universal clip onto the side panel or rear fender.

In the video above, Motool’s renowned suspension expert, Dave Moss, illustrates how quick and easy it is to measure the rear and front suspension sag with the Slacker tool.

Motool developed the Service Assistant app to connect via Bluetooth to the Slacker V4 Digital Sag Tuner. This is a money-saver since you don’t have to buy the handlebar-mounted Wireless Remote.

But the immediate digital read-out of the sag on the Virtual Remote in the app is not the main advantage.

What makes the app so useful is that it allows recording measurements and other relevant data for future reference. This is very handy when we change the preload as a function of the payload, such as riding solo or with a passenger and luggage.

If you race or own several motorcycles, the app is a time-saving database. It allows you to make up profiles, store sag measurements, and record data for several riders, bikes, riding modes, and road conditions.

The Tuner is a very well-made device that looks and feels solid and durable. Mine still looks like new after unintentionally dropping it a few times, and I fully expect it to perform reliably for many years to come.

The permanent magnet on the back of the device is remarkably strong. I proved this after returning home from a ride one day and discovering I’d forgotten to take the device off the rear axle.

You don’t need to buy a kit, as you can measure the sag with just the Slacker V4 Tuner and your smartphone.

Powered by two AAA batteries, there’s scope for improving the Slacker V4 with a USB-C port and a rechargeable, higher-capacity battery pack.

The Slacker V4 Tuner is built fairly compact, measuring 5.75 inches by 4 inches by 2.5 inches, and weighing just under 11 ounces. Further reducing its dimensions, however, would help take up less space in the tool kit, tank bag, or pannier. Always a worthy goal, especially for adventure/touring motorcycles carrying a lot of gear on long-distance travel.

Adventure riders are bound to come across a wide variety of road and weather conditions. Roadside suspension preload/sag adjustments are therefore inevitable, and carrying the Motool Slacker V4 Suspension Tuner is advisable.

If you don’t want or need the Ultimate, but want more than just the tuner tool, the less-comprehensive Starter Tuning Kit’s regular price is $240. The Premium Tuning Kit is $266.

Every kit includes the Motool Slacker V4 Digital Suspension Tuner and can be ordered directly from the manufacturer at Motool Inc., based in Bend, Oregon. 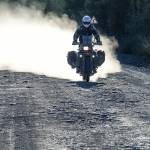 Setting up motorcycle suspension properly is one of the most important aspects of motorcycle safety and fun-factor. Yet most riders don't do it. Read more…