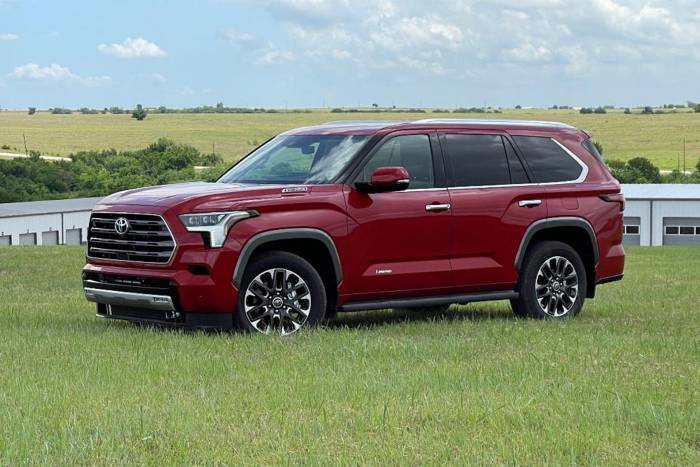 Driving a bona fide SUV instead of a crossover doesn’t mean endless pain at the pumps. We’ve found the most fuel-efficient 4×4 SUVs to give you maximum capability with minimum fueling costs.

The line between crossover and SUV can be pretty blurry. Call us old-fashioned because we think of an SUV as having a frame that’s separate from the body of the vehicle. The suspension and body are bolted to that frame. It’s what gives the SUV its ruggedness — truck-like bones underneath that let it work hard.

Are there exceptions to that rule? Of course. So, we’ll call out the crossovers that can work just as hard as an SUV. Their credentials include off-road strength and high-capacity towing, but they don’t have a body-on-frame chassis.

Why do we need the separation? Because we believe that a hardcore SUV fulfills our heavy-duty towing and all-around utility demands. At the same time, that ruggedness comes at the cost of poor fuel economy.

We’ve used the EPA’s official fuel economy ratings to find the 12 SUVs that offer the best fuel economy and the go-anywhere traction of 4×4 or all-wheel drive (AWD). Some of these surprised us with their efficiency and the variety of powertrains on the list.

Here we have the most fuel-efficient SUVs, ranked from worst to best, sorted by the EPA combined-cycle fuel economy rating.

The QX80 is Infiniti’s luxury off-road brute. This big, three-row SUV comes with a 5.6L V8 that makes 400 horsepower and 413 pound-feet of torque. A seven-speed automatic does its best to help fuel economy, but it is working with a lot of weight and horsepower.

Beauty meets beast in the 2023 Mercedes-Benz G-Class. Looking quite unlike anything else in the German luxury automaker’s lineup, the G-Wagen (as the SUV is also known), is built for going places where others dare not. The German tank boasts a ladder-type frame with a mounted body that accounts for its off-roading strength and stability, plus it aids protection of the underbody parts.

A 4.0L turbocharged V8 rated at 416 horsepower lies under the bonnet of the G 550. Combined city and highway driving will net 16 mpg as per EPA estimates.

For others who scoff at the thought of reducing their carbon footprint, the Mercedes-AMG G 63 packs a bi-turbo version of the motor, conjuring an imposing 577 horsepower.

The Lexus GX 460 is a rugged off-road body-on-frame SUV that has been on sale since the 2010 model year. Off-road dedicated hardware includes full-time four-wheel drive, a two-speed transfer case, and Torsen locking center differential. The best part about number 10 on our list of most fuel-efficient SUVs means you don’t have to settle for a stripped-down econobox.

Powering the GX 460 is a 4.6L V8 that makes 301 horsepower and 329 pound-feet of torque. The transmission is a six-speed automatic. This modest combination returns an EPA-estimated 16 mpg combined city and highway driving.

The Toyota 4Runner is very similar to the Lexus GX listed above — 4×4 and Kinetic Dynamic Suspension are both offered, as is a locking rear differential. And the 4Runner comes in TRD special versions that add even more impressive off-road capability features, including tuned off-road shocks and springs.

Unlike the Lexus, the 4Runner comes with a V6 instead of a V8. It means slightly less power, at 270 horsepower and 278 pound-feet of torque. Combined with a five-speed automatic, the Toyota is able to offer slightly improved fuel economy.

It can manage an EPA-estimated 16 mpg on city streets and 19 mpg on the open highway.

The Ford Expedition and Lincoln Navigator look like very different vehicles from the outside and from behind the driver’s seat. But underneath, they’re nearly the same. That includes a fully boxed frame, which also underpins the F-150 — the bestselling pickup in the world.

Though it is body-on-frame, using aluminum for the bodywork trims some pounds out of the two big SUVs. That can help save fuel. Instead of a V8, the pair use a 3.5L V6 with two turbochargers.

The XL, XLT, and STX trims of the Expedition make 380 horsepower and 470 pound-feet of torque. The top-end trims, the Timberline and Stealth, develop as much horsepower as the Navigator: 440. All models, regardless of trim level, use a 10-speed automatic transmission.

Government fuel economy estimates for the lower trims of the four-wheel drive Expedition sit at 18 mpg in combined driving. According to the EPA, the heavier and higher-powered 4×4 Lincoln Navigator also returns 18 mpg.

The acclaimed V8 engine from Stellantis will soon join the dodo bird as Dodge, RAM, and Jeep transition toward electrification. Assuming the mantle of heavy-duty hauler is an all-new 3.0L turbocharged inline-six dubbed the Hurricane. Two versions of the Hurricane will go into the Wagoneer and Grand Wagoneer.

The Grand Wagoneer is a serious luxury model with an effortlessly smooth powertrain boasting incredible capabilities and refinement. Low-range gearing, Selec-Terrain traction management, and an available electronically controlled air suspension with adjustable ride height are all part of the equation.

The luxury counterpart of the legendary Toyota Land Cruiser uses the same platform as the all-new Toyota Tundra. It also gets a version of the truck’s new powertrain: a 409-horsepower twin-turbo 3.4L V6 and 10-speed automatic. The Lexus LX 600 underwent a complete redesign in 2022, so only a little has changed for 2023.

In the LX 600, you’ll find full-time four-wheel drive, active height-adjustable suspension, and even crawl control. It doesn’t look like an off-roader, but don’t let the spindle grille fool you. This big ute can wheel.

It has an official estimate of 19 mpg overall.

The first real competitor to the Jeep Wrangler in years, the Ford Bronco puts the Ford Ranger platform to good use. The stylish off-roader lets you remove the doors, the roof, and even the fenders. It also has automatic and manual transmission versions that give you the same fuel economy rating.

The shorter and lighter Bronco two-door gets the best fuel economy. It’s also the only one that offers the seven-speed stick with crawler gear.

The mighty little engine will reward you with 20 mpg in combined city and highway driving.

By and large, the all-new 2023 Sequoia offers a truly powerful driving experience. Bringing all that force to bear is an i-Force MAX 3.4L twin-turbo V6 hybrid powertrain that’s good for 437 horsepower and 583 pound-feet of twist. Part of that hybrid magic calls for a 48-horsepower electric motor sandwiched between the V6 and a 10-speed automatic transmission.

The powerplant isn’t the only piece of modern tech in common with the Tundra. The redesigned Sequoia sits on a modern body-on-frame chassis with a fully boxed frame also shared by the Tundra. Nonetheless, Toyota’s revamped SUV carries a beefy presence — and not just because it pushes the limit of every single parking space it occupies.

Do we miss the trusty V8? Yes, but the new Sequoia hybrid delivers more power, more torque, impressive fuel economy, and an overall better experience. Read our review of the 2023 Toyota Sequoia to learn more details and insights.

Yes, that’s a lot of vehicles, all under one entry. While this gaggle of GM SUVs differs in looks and audience, they all share the same chassis.

GM’s big haulers can tow up to 8,000 pounds when fitted with the 3.0L Duramax diesel engine and four-wheel drive. The Duramax turbo inline-six makes 277 horsepower and 460 pound-feet of torque, and a 10-speed automatic helps make the most of that.

GM offers luxury models, family-friendly carriages, and even SUVs designed for work duty and off-roading, letting you pick one perfect for your needs. Whichever one suits your fancy, official estimates report 22 mpg for the diesel powerplant.

The ultimate off-roader with a plug. The Jeep Wrangler has been the king of factory off-road SUVs for decades, with only Ford’s Bronco attempting to wrestle away the crown.

Now the Wrangler offers more than just rugged capability, removable doors, and a top that can stay at home. The Wrangler 4xe lets you off-road silently, using only electricity.

A plug-in hybrid (PHEV), the 4xe combines an electric motor and a 2.0L turbo-four. The combined power output equals 375 horsepower and 470 pound-feet of torque. Not to mention the ability to drive on electric power for up to 21 miles.

That’s enough to give Wrangler 4xe a miles-per-gallon equivalent of 49. It gets 20 mpg combined when the battery is empty.

Jeep also offers a 2.0L four-cylinder Wrangler that would have held this spot on our list of most fuel-efficient SUVs — if the hybrid didn’t exist — with a 23 mpg combined EPA rating.

The first Rivian R1S SUVs started shipping in 2022, making this electric vehicle the only body-on-frame SUV EV on sale now. Not 100% traditional, as the frame holds the electric battery and powertrain. But we say it still counts, as does 14.9 inches of ground clearance and up to 7,700 pounds of towing.

With a 135kWh battery pack, it offers up to 316 miles of range. All of that technology equates to 69 MPGe.

We know that discerning the distinctions between an SUV and a crossover are tough. That’s why we explained our methodology up top. But we also understand that some crossovers seriously bridge the gap, like the unibody-constructed vehicles below.

These vehicles can tow as much as traditional body-on-frame SUVs, and some offer impressive off-road capabilities. So, here is a quick hit of the ones that we call “on the fence,” listed from good to remarkable for their fuel economy.

Dodge Durango (21 mpg): 18/25 city/highway. The Durango offers one of the highest tow ratings of any crossover — up to 8,700 pounds — an impressive effort.

Hyundai Palisade/Kia Telluride (22 mpg): 19/27 city/highway. These two brutes are clearly trying to look like an SUV, even if they have a unibody chassis. Nevertheless, the 3.8L V6 does it right. 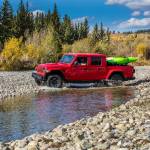 Needing a 4x4 truck doesn't mean you have to resign yourself to a growing gas bill. The most fuel-efficient pickups will help you do more and spend less. Read more… 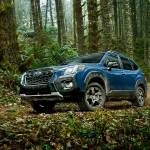 Does Kelley Blue Book have a crystal ball? Most likely not. But on the off chance that you don’t either, you can consult the bedrock auto appraiser’s awards for the best resale value cars. Read more…